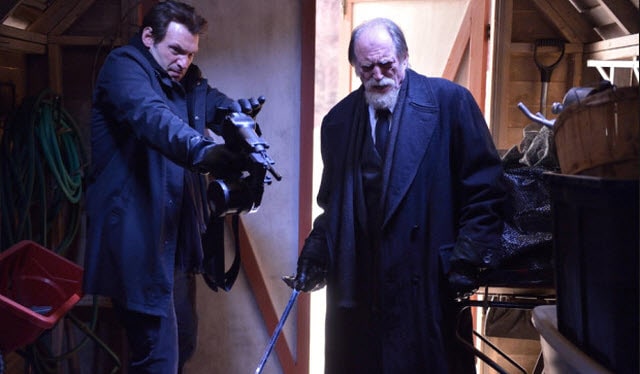 Well, the plot is finally starting to move along inÂ The Strain,Â as people are very, very slowly starting to realize that not all is well in the Big Apple.Vampires are attacking the young and old alike, rampaging through urologists and old folks at an accelerated pace. If anything, this episode gives us that, with no less than four characters (if you count Ansel’s wife) beginning to graspÂ the basic concepts of The Master’s plan to end humanity (some with the help of Setrakian, others with the guidanceÂ of the mighty Ephraim McWigmaster). However, this slow advancement of plot doesn’t really do much to add to theÂ The Strain‘s dull brand of storytelling: in fact, with so much time dedicated to explaining what is going on and watching people get eaten, “Runaways” doesn’t really get to spend time with any characters at all, save for Nora and Holocaust-era Setrakian – a pair of featherweight stories desperately clinging to the hollow action surrounding it.

At least things areÂ moving, right? I suppose “Runaways” gives us that: with someone at the CDC seeing Ephraim’s video, and numerous people witnessing the slaughter at the nursing home, it’s only a matter of time before the show’s larger-scale stories begin coming into play. Admittedly, most of these are pretty weak – Setrakian’s predictably lame Holocaust story among them, his brother being murdered by The Master who just happened to be patrolling concentration camps for food – but I can at least respect the attempt to push the narrative forward a bit, even if it does so by reaching backwards to tell a goofy story that could’ve been set anywhere at anytime, World War II and the true horrors that came with it mere illusions on the background ofÂ The Strain‘s trope-littered story lines.

Much of the rest of “Runaways” feels random, a bunch of disconnected scenes that all reinforce what we already know: things are getting bad in New York, and doom awaits the ignorant. There’s just nothing of interest added to any of them: we get some forgettable background about The Master and his parasitic ways, a painfully obvious catepillar metaphor, and Nora lamenting the fact she “has” to abandon her old, dementia-afflicted mother at a nursing home – that is, until a vamp comes running through, leading us to this week’s contribution to the Worst Line of the Week (a category Nora’s owned in recent weeks): “We’re going home.”

For a show with such an interesting take on vampire lore (which exists in the show’s reality as well, apparently),Â The StrainÂ has gone out of its way to undermine its own potential, relying on it’s occasionally-engaging visuals to maintain momentum where cardboard characters and a painfully obvious plot cannot. “Runaways” isn’t as egregious an attempt to replace narrative depth with flash as previous episodes (episode director Peter Wellers – yes, that Peter Wellers – restrains from a lot of visual panache), but in its place is a lot of nothing, right down to the extremely muted emotions of characters, be it in conversation or with themselves: when there aren’t blades flying and tentacles sucking,Â The StrainÂ has nothing unique to offer the audience, save for anÂ intriguing idea or two buried deep under the show’s aggressive mediocrity, a dramatic tepidness on full display in “Runaways”.