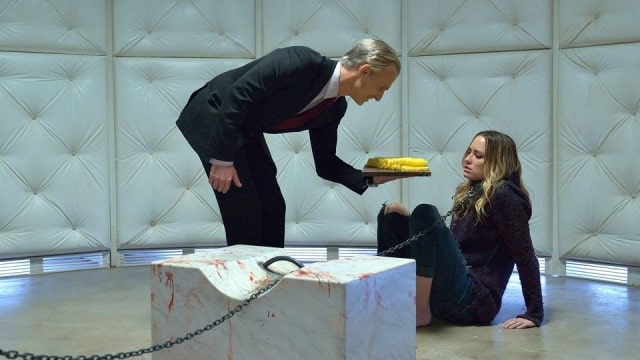 For thirty-plus minutes, “Dead End” teases audiences with the first real, significant plot movement since the Season 1Â finale. With Eichorst and Dutch isolated from the rest of the crew, “Dead End” seemed destined to be heading for an epic showdown once Dutch inevitably tried to make her escape.Â The Strain‘s second season, much like its first, has suffered from its inability to foster a sense of urgency. With Dutch vs. Eichorst as its main course, it seemed destined one ofÂ The Strain‘s leading members would find their end in this hour, and give some serious dramatic propulsion for the last two episodes.

And then there’s the final scene: one of the most tension-filled sequences inÂ The Strain‘s brief history, energetically shot by Phil Abraham to evoke a sense of tension this series has lacked since its first episode.Â Dutch running away from Eichorst in a closed-off wing of a historical hotel is a wonderfully applied homage to classic horror films, right down to Dutch’s injury that slows her down, turning Eichorst’s steady, methodical walk into a sinister march towards a final confrontation. The stage is set for an epic, season-thrusting moment, and instead, both characters walk away in the same familiar fashion as every confrontation before it: the strigoi shaking off their minor injuries, while the living humans hug and cry in fear for the event they just survived.

This moment is beyond frustration. While I never want to see an actor out of work, this season desperately neededÂ somethingÂ devastating to give some weight to the story. Normally, the show goes for the heart with lame stories about Zach missing his mother, or Fet pining over Dutch. With Zach nowhere to be seen, there’s a huge opportunity forÂ The StrainÂ to give this story some serious pathos in its main storyline. The secondary stories certainly can’t carry the weight; I’m not sure which one I care less about, the idiot who Setrakian once saved selling the Lumen to Alonso Creem (yup, that’s his name), or Gus sleepingÂ with Aanya right before sending her out of the city once and for all. So the impetus is on the Dutch/Eichorst story to give at leastÂ ONEÂ episode in this series of some significance (besides the one where Kelly got turned) – and not only does this story not deliver, but it ruins itself before it even gets to the best parts.

Yup, I’m talking aboutÂ thatÂ moment, when it’s revealed Eichorst has captured Dutch to act out the sexual aggression he never got to with Helga, the Jewish woman who once turned him down and he had killed before he could, I don’t know, beat her and drink her blood or whatever he’s supposed to do. It doesn’t really matter: it’s all about building to that moment where he tells Dutch to “drop her pants,” “bend over,” and “spread her legs” (which is preceded by a scene where he forcefully feeds her a very phallic-looking piece of pineapple), which ranks among the most disgusting, vile things I’ve seen any character say or do in recent memory, even in scenes where things were taken farther (though it doesn’t quite hold a candle to poor Sansa’s wedding scene earlier this year). Not only had the threat been established at this point – for Christ’s sake, she’s chained up and pantless already – but the episode has to tie it to his glee of having his former crush murdered after she shuts him down romantically and really just tarnish what becomes a wonderfully-constructed chase sequence.

It’s really deplorable how that scene plays out and further colors Eichorst’s flashbacks. It undermines what’s been a particularly delicious villain to this point, a man without purpose who is driven by Germany’s horrible economy and position in the world to join the SS, and finds his calling when he embraces the darkest impulses inside himself. While pretty conventional for any World War II-era villain, it at least paints an interesting image of a true “late bloomer.” Turning him into a sexual predator fixated on Dutch cloudsÂ The StrainÂ with an ugliness it has no interest in addressing (or given its history, even has a grasp on how to), and undercuts the building tension in Eichorst and Dutch’s scenes in that padded room.

That extremely disappointing moment doesn’t undermine the construction of the scene that follows, but I’d be lying if some of the tension hadn’t exited the room when Eichorst began looking up Dutch’s legs and unfolding his feeding tentacle – and then, when Eichorst ignores the massive dynamite blast Fet sets off, whatever remaining momentum the episode had fell to the floor. As a whole, “Dead End” ends up being an ironically fitting title for the episode: whether referring to Gus’s “romance,” Setrakian’s inability to complete any of his missions, or the utter lack of stakes in the climatic Eichorst vs. Vamp Hunters scene, I can’t think of a better name for this particularly frustrating (and largely entertaining, if only in segments) episode ofÂ The Strain.