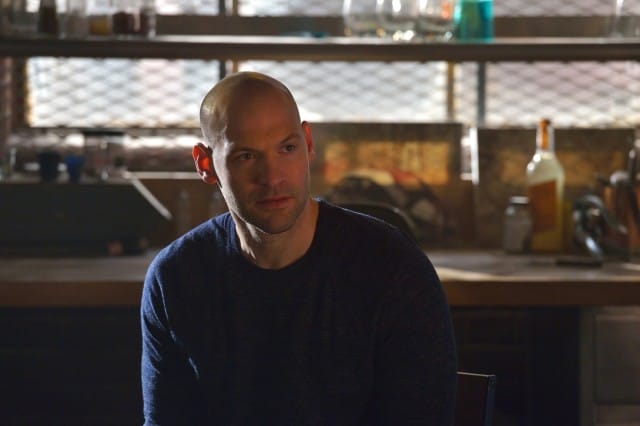 Everyone’s got an agenda onÂ The Strain,Â and boy, does nobody want to be upfront about it in “Fallen Light.” Full of telling glances and the narrative equivalent of exploding neon signs, this was not quite what Â I expected from an episode of television directed by Vincenzo Natali, a very budget-friendly hour that substitutes actual plot movement in favor of a lot of allusion – if anything, “Fallen Light” only shows how fragmented The StrainÂ hasÂ become throughout its second season, and with an alarming amount of crying to boot. Sure, it appears “Fallen Light” is the lead-in to something larger forÂ The Strain,Â but at this point, it’s nearly impossible to figure out what actually matters and what doesn’t.

Do Nora’s feelings for Eph matter anymore? Nora’s been an aimless character since losing her mother last season, understanding she can’t fill the role of proxy mother to Zach, or as Eph’s partner – in all honesty, I had basically forgotten they were a couple at all by this point. This season, Nora’s become less and less of a character as she’s reduced to the person who asks stupid questions to catalyze expository scenes, so when “Fallen Light” tries to conjure empathy for how her and Eph’s relationship began (with their “meet cute” coming way via a passive-aggressive argument during one of Eph’s presentations), it’s no surprise that it doesn’t really work. All of a sudden, Eph’s talking about his feelings for her, and she’s crying because she might know he slept with a woman (can you remember her name?…. It’s Leigh) in D.C., or maybe because she plans to run away with the extra passport she asked for… or who really knows why she ends the episode crying on a neatly-made bed, but she does, andÂ The StrainÂ really wants us to feel emotions for her – which is kind of hard, considering how little importance she’s served this season, except to remind Zach that his real mother is a vampire – and to remind us that Sean Astin was once on the show as Eph’s lame, traitorous assistant, via a very awkwardly-placed series of flashbacks to 2005.

Another prominent story in “Fallen Light” is Dutch’s complicated emotions, and any scene that involves this features her crying, unable to make a decision. “Fallen Light” does not break from this formula in the slightest, presenting an emotional counterpoint to Nora that makes no sense (and giving us another episode where Kevin Durand speaks in a wistful whisper, which gets more annoying and patronizing with each passing hour). Is there any dramatic value to watching a character talk about what an idiot she is for making the decisions she makes, while she continues making them?Â The Strain‘s sudden fascination with Dutch’s inability to decide who she wants to date during the vampire apocalypse is as strange as its insistence on giving Zach an emotional centerpiece on the show (his phone conversation with his grandparents this week was unpleasant, to put it gently), or as odd as how it turns its most physically menacing performer into a whimpering, constantly consoling and spineless guy who thinks he can just wait out the lesbian storm Dutch fights within herself and she’ll come out the other side loving and respecting him as a partner. Why does any of this matter?

The only real story of importance in “Fallen Light” is that it reveals what this entire season was building to: the negotiation for the Occido Lumen, which is revealed to be a very elaborate Mexican standoff. Quinlan wants Setrakian to acquire the book, but not to end the war; he doesn’t trust Setrakian to honor their deal, and wants to kill him and destroy the book on behalf of the Ancients (even though he said he didn’t care about them, insulting them in previous episodes… but I digress). On the other side of Alonso Creem’s auction house is Palmer, whose young girlfriend and life of riches is threatened by the new fact that “the white” is not a permanent thing (more rules to vampire powers yay!), and thus he plans to counter Eichorst’s certain betrayal with his own betrayal, complete with an ominous quote and a creepy grin pointed at his girlfriend Coco, who is totally downÂ with dating an 80-year-old, as long as it means she gets to be passive and silent by his side.

This is the stage “Fallen Light” sets, a scenario where two sides are openly talking about betraying each other, while Gus and his army of prison convicts (I really can’t make this up) wait in the shadows to ambush Setrakian the moment he wins the deal, or after Setrakian/Eichorst show up and nearly kill Eichorst/Setrakian.Â How do Eph (the main character of the show), Kelly, Dutch, Fet, Nora, and Zach figure into all of this (or the mayor’s assassination)? I suppose only time will tell; unfortunately, there’s nothing in “Fallen Light” that bottlenecks this season’s erratic storytelling into anything particularly exciting, a rigged book auction (led by a gangter who can barely talk around his massive grill) and a very ill-thought out trip to D.C. serving as the apparent set pieces for the finale, with a few angsty, failing relationships bringing up the tail. Hopefully, all will be revealed in the season finale, andÂ The StrainÂ will be all the better for it. Unfortunately, “Fallen Light” doesn’t exactly make a convincing case this will happen.