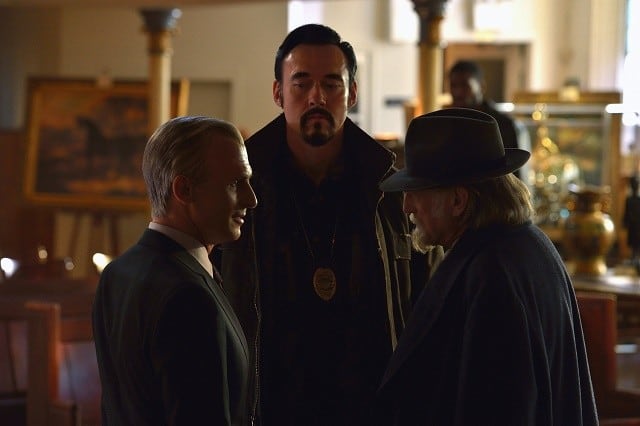 With the downtown fort shut down and Team Eph disbanded, “Night Train” offersÂ The StrainÂ a chance to wipe the slate clean in the season finale. The oft-delayed negotiation for the Occido Lumen was finally set, Eph was taking his son south to the grandparents we’d never heard about before, and Palmer was waiting on the sidelines to throw a wrench into the whole operation to take down Eichorst. While it didn’t build to these stories effectively, it certainly felt like The Strain‘s various narratives were coming to a head entering “Night Train.”

And instead of getting a powerful, culminating hour of television, we get three stories: one that ends on a boat heading nowhere, andÂ a pair that exist only to kill off two of the show’s five major female characters (while keeping two of them entirely off-screen, by the way). To call this a “disappointing” hour of television is an understatement. “Night Train” finds new ways to top last season’s anti-climatic conclusion, only offering the sight of Setrakian staring wide-eyed at the Lumen and two dead bodies as evidence of a supposedly “game-changing” finale.

These are not climatic stakes: the sheer amount of stupidity it takes to kill both Nora and Coco in the same hour is almost impressive in its machination. In order to kill off Nora, first the episode has to separate her from Eph, turn her into an ineffective fighter who ineffectively slashes away at Kelly’s muscles, and then commit the most heinous act this show’s ever committed.

Let’s pause from the whole Nora-killing thing to talk about Zach for a moment. Somehow, heÂ went from being a generically terrible character to one of the most awful, useless creatures I’ve seen on a television show. In the course of 13 episodes,Â The StrainÂ has created the worst villain of all in Zach, a child that complains to leave the shelter for the course of a season, then wants to take pictures when they’re leaving because he’ll “miss it”; a kid who nearly got everyone killed when he let his undead mother and blind child cronies into said shelter; and then, who lets the woman who’s cared for him die because he wanted to distract her and save his mother, who has tried to kill his father, everyone who has tried to protect him, and who is undeniably no longer the woman who raised him. Kelly even refuses to stop drinking Nora when Zach begs her too, but then all is forgotten, and they walk into the sunset, a reminder that this show, among everything else, refuses to let any of its characters grow.

The answer is really simple: look no further than the show The StrainÂ wants to piggy back on to see how to handle a child character. Carl onÂ The Walking DeadÂ was a three-dimensional punchline for the first three seasons as the show refused to allow the primal, raw nature of the world prematurely age him. When he had to put a bullet in his own mother’s forehead after delivering his sister from her womb, The Walking DeadÂ breathed life into Carl, opting to mature his character and remove him from the existential hamster wheel he’d been running on. And it’s paid huge dividends toÂ The Walking Dead, deepening his relationship with his father, and helping give some pathos to other characters like Michonne along the way.

The StrainÂ has no interest in this sort of growth, and as long as Zach remains a timid little boy afraid to kill his undead mother, he has no opportunity to be a useful character. There’s been such attention paid to his devotion to Kelly, it’s severely limited his ability to grow as a human being, especially without her being around him for the overwhelming majority of the series. “Night Fall” does nothing but reinforce that depressing reality, costing itself one of its greatest, most underutilized assets as a result.

Honestly, could anything have been more disappointing than how Kelly defeats Nora? At least Coco’s death was neatly telegraphed: her death excises the single lamest plot of Season 2, the inter-generational love affair ruined by the selfish presumptions of a one-percenter. Nora’s death is just… empty, a contrived moment that is neither a satisfying end to her character, or the season as a whole. This season, Nora’s been reduced to her romantic connection with Eph, which hardly allowed her to exist in three believable dimensions, or give her many chances to wield her sword and gun combo – that is, until it’s time for her to die, and she provesÂ to be ineffective with her signature weapons. Stripped of her power and purpose,Â The StrainÂ had to either put in the effort re-invigorating her character, or take the cheap cop-out and kill her.

Unfortunately, they chose the latter. If anything, it’s fitting the “signature” death of Season 2 represents what went wrong with this season as whole – besides the silly Setrakian/Eichorst showdowns, which amounted to a series of weak jabs against each other’s cheeks, accentuated only by some generic Nazi hatred and the few flashbacks we saw into their “history” together.Â The Strain became preoccupied with creating a plots that didn’t go anywhere for nearly a dozen episodes, only to drop half of them in the final episode – seriously, where the hell are Dutch and Feraldo? – to bury two female characters and give our middle-aged white men something else to be upset about (while Gus and his Army of Walking Stereotypes trails, guided by Quinlan’s mission to do whatever he’s trying to do), and tie it all together with a lame Setrakian voice-over about men becoming primal and how that conflicts with them saving humanity.

The StrainÂ has been an absolute mess this season, discrediting its own reality with its inconsistent logic – like why has no other scientist in the world tried to study this event? or why can’t the people in the city seem to decide if this is a world-changing event, or just a nasty flug bug? – and refusing to explore its characters beyond the most superficial, plot-serving levels. Frustration doesn’t begin to define it: “Night Train” is a wildly anti-climatic finale, an hour that rests the entirety of its emotional thrust of fridging two prominent female characters, and a child character that literally serves no purpose except to complicate the plot with his idiocy. Safe travels Setrakian and Fet: may your journey take you far, far away from the ugly, lifeless New YorkÂ The Strain continues to exist in.