Home
The Strain
The Strain Season 2 Episode 2 Review: “By Any Means” 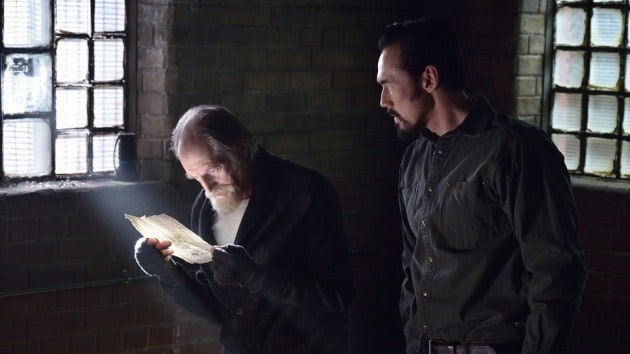 AsÂ The StrainÂ expands its stories from present day New York with flashbacks to mid-20th century Europe,Â it naturally finds itself employing much leaner approaches to storytelling. Gone are entire episodes where characters sat around whining about their petty problems; save for Zach and his complete uselessness, there aren’t a lot of extraneous distractions when it comes to the story. “By Any Means” is a direct beneficiary of this new approach, free from an unnecessary allegiance to emotions and the confines of reality, even if it still occasionally gets bogged down in its own dramatic process at times.

As with the season premiere, “By Any Means” works at a rapid pace; Goodweather and Martinez have already developed their first attempt at a cure, which pushes their story along a lot faster than anyone would’ve expected, given the show’s pace in its freshman season. Moving the plot along a bit actually gives the episode some room to expand on a few ideas, creating a legitimate moral quandry when the two doctors have to come to terms with what they’re putting the poor old infected couple through. This is a first for The Strain: not only in how it creates an emotional dimension for its characters, but how it makes themÂ empatheticÂ creatures for the first time in the show’s history. Never before has Eph’s drinking felt like it existed for any sort of reason except typical white angst; here, his drinking informs a deep pain about the moral sacrifices that have to be made for the greater good in times of war and destitution. They don’t have a choice but to coerce these people into helping, and for once,Â The StrainÂ conveys that emotion with conviction, giving some much-needed life to the stressed looks always coloring the faces of Eph and Nora.

Their story does get slowed down a bit when the medical details start flying, making it near impossible to follow how exactly they are developing this prototype for a cure (I still have no idea what the ‘amino acid’ stuff was talking about). I can appreciate the dedication to detail, however, something that is beginning to come into focus in other parts of the narrative, even while silly things like Fet and Dutch having sex in a pool are happening on the fringes of the episode (at least theyÂ finallyÂ got that particular development out of the way quickly). “By Any Means” tells the story of how Setrakian came across his infamous weapon-cane, finally bringing Palmer into the fold in a meaningful way, adding an integral wrinkle to the mythology driving much of the allusions seen in the last half-dozen episodes of the show (like why the rock star vampire is suddenly relevant again; there’s got to be a reason for that, yes?).

Without lingering on any of these moments, “By Any Means” is able to leave logical consistency at the door a bit, and take audiences for a visual ride, led by Fet/Dutch’s shower stall assault and carefully followed by the creepy images of the Children of the Night accepting their first mission. These moments areÂ fun, fun in a way that The StrainÂ never consistently aspired to throughout its first season, when it constantly paused for cardboard-quality attempts to humanize its merry band of vampire hunters – while “By Any Means” certainly has its blemishes, it quickly moves past them, never letting a moment linger. This is to the show’s benefit; through two episodes,Â The Strain’s second seasonÂ feels like The Master himself, shedding its blemishes and scars for a fresher, younger skin.

– Why is the world taking such a casual approach to what’s happening in New York? At least that one council woman is pissed.

– Love the Bee Gees cover of “How Deep Is Your Love” playing in the background when Fet and Dutch enter the bathroom full of vampires. It brought their story to life in a fantastic way.

– So far, the performance of Young Setrakian isn’t working for me, though I’m willing to give him a few more episodes. Maybe he’s just missing that bitterness I adore him for.

– Fet can’t swim! As someone who didn’t learn to float in deep water until he was able to drink legally, I can feel his pain.

– The fact Setrakian’s sword was forged by a Polish swordsmith is enough to get me on board for this entire second season.

– Lest we forget, Setrakian’s temper tantrums remind us a white man’s angst will always be resolved when he expresses his anger in a “mature” way. Wait…

– The shimmering image of Eichorst in the Nazi doctor/pawn shop owner’s mirror was a wonderful touch.