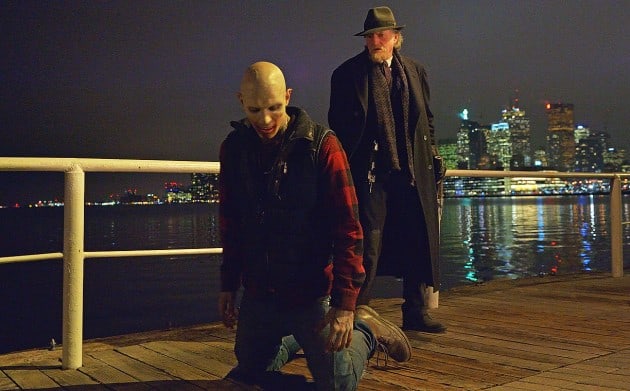 “Fort Defiance” is a fitting name for this particular episode ofÂ The Strain, and not because it references Fet’s thrilling (to him) new underground construction project. After two episodes that began to move away from the most problematic Season 1 tendencies, “Fort Defiance”… well, defiantly returns to those rhythms and habits in full force. The issue is two-fold; not only does “Fort” try to return to some of the more emotional, smaller (and less effective) arcs of the first season, but it also exhibits that familiar old habit of doing nothing for the course of an hour, existing only to feed viewers exposition and twist up its logic just a little bit more.

Let’s just get this out of the way: I’ve had about enough of Zack’s temper tantrums, and his all-around idiotic attitude towards the situation they’re in. Running away on a bus? Throwing a temper tantrum in a lab? Refusing to accept reality and continuing to walk around with stank face on? Who thought this would help make the show’s most annoying character more sympathetic? Not only has the change of actor done nothing to bring the character to life, but “Fort Defiance” doubles down on the trite writing that plagued his character (and by proxy, his parents) throughout the entire first season, dragging every single scene he appears in down with his toxic personality. I was hoping this season ofÂ The StrainÂ would take lessons from Carl Grimes’ growth onÂ The Walking Dead – but “Fort Defiance” proves this is not the case, with Zack growing more and more insolent (and utterly useless) as the season continues.

Thankfully, Zack is but a small component of an episode that sprawls out across New York; however, what else there is to offer in “Fort” isn’t all that exciting. Councilwoman Justine Feraldo is really the lone highlight here, showing an extreme approach to protecting Staten Island, both with her stringent immigrant inspection program, and her lovely display of hanged, beheaded vampires she plans to mount on the entrance to the island as a “warning” to anyone trying to mess with Staten Island (“This is who we are!” she screams to a group of slightly confused lemmings). That moment, while it may bring up a lot of confounding questions about the logistics of what she’s doing (can’t people just boat to the island at night with vamps aboard?), is the lone bit of excitement that springs from “Fort”; most of it is spent with Dutch looking for her ex-girlfriend and Setrakian ingesting vampire worm liquid into his eyeballs to maintain his “youth,” two stories that are nonsensical in their own ways.

Dutch’s story is really complete nonsense, her emotions twisting and turning at random in order to fit whatever cliched situation she finds herself in (her ex-girlfriend’s mother calls her a ‘vampire,’ and not because “of the whole gay thing”). Most confounding is her sudden urge to pleasure Fet in the ice cream truck after confronting her ex’s mother. Is that really how she deals with her emotional issues? By the same token, Setrakian’s little experiments raise a whole lot of logical questions forÂ The Strain. How is he not becoming a vampire? If it’s supposed to keep him young, why does he still look 80 years old? Why did it knock him out, and then make him stronger (and hungrier)?

This isÂ The Strain‘s biggest problem: the more it spends time lingering without big external events happening, the more time it has to get lost in its own absurdities, always opting for the coolest, loudest moment, rather than the most carefully thought out one. It’s why Nora basically exists as a nodding head in this episode. We need more shots of Eph getting drunk and yelling at his kid (and yanking him around the lab) instead, rather than trying to repair the horrible characterization Nora received in the first season, and make her a meaningful piece of Eph’s plan to unleash a zombie ‘infected’ with a potential cure back into the city. Nora is left on the sidelines, while Eph postures to the Master through the old couple he connived into becoming his subjects – andÂ The StrainÂ is all the more weaker for it, as it often is.

There’s certainly thingsÂ going onÂ in “Fort Defiance”; Reggie’s back, visiting his firefighter brother on Staten Island (because that matters?), Palmer’s bringing Coco into the fold, and Gus loses his new vampire friends in a UV pit during their kidnapping attempt. But it all feels like a lot of posturing, without any real and/or logical stakes at play. Rather, “Fort Defiance” is trying to run in place, without giving off the feeling of killing time. Yet with each predictable minute of “Fort Defiance,” the mirage of actual story movement grows thinner and thinner, until its running time is full.