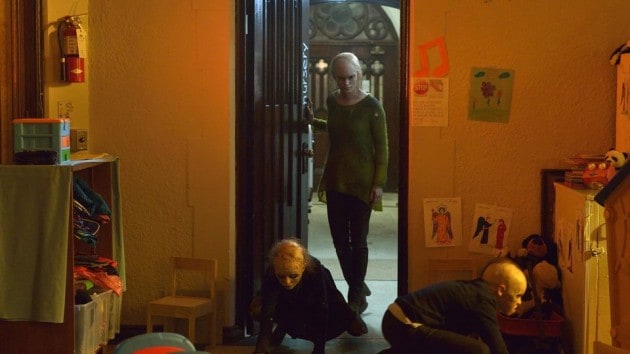 The Strain‘s second season often feels constructed in direct response to the most common criticism of its freshman campaign, whichÂ slowly meandered towards the first showdown between Eph and The Master in the disappointing finale. Season 2 has tried to combat that by making it all plot advancement, all the time, something “Identity” directly suffers from. While Eph still remains an intriguing centerpiece, everything flailing around him in “Identity” speaks to some of the biggest flaws in the show, particularly those centered around The Strain‘sÂ inability to characterize anything in three dimensions..

Like last week’s episode, the title of this week’sÂ The StrainÂ is a damning one: “Identity” never takes hold because its stories focus on people whose identities are fleeting. Outside of Eph – whose character swings throughout the two seasons have been considerable, though this could beÂ attributed this to his alcoholism – every character “Identity” focuses on is an enigma, raising more questions in its attempts to push the story forward dramatically than it offers answers. For example, we still have no idea why Kelly and The Master are so intent on kidnapping Eph’s child, just as we really have no idea why The Master calls Eichorst his “special child,” or why he chose Bollivar’s body as his new vessel to inhabit – or even why he’s able to do that, considering the other ancients lie around nude on dollies with untrimmed fingernails and blood puddles surrounding them (seriously: if they’re so knowledgeable and powerful, why the hell do they just sit in a dark room and murder/eat naked guys?).

As always, the vampire side ofÂ The StrainÂ remains as impenetrable as ever, a story still hinging its success on teasing whatever ‘stage’ of ‘the plan’ is coming next, or delivering cool images that add unnecessary complexities to the show’s already-nonsensical mythology.Â Unfortunately, the humans of “Identity” fare no better (that is, except Dutch, who seemingly falls off the map in this episode). Spending lengthy amounts of time with Nora the Bland and Deadly, Zack the Unbreathing, and The Woman Who Fills Eph’s Story With Exposition are hardly the avenues for engaging storytelling onÂ The StrainÂ – and when the other attempts at drama fail to deliver anything but more goofy plot twists (Stoneheart assassins!) and underdeveloped progressions (Feraldo is cracking under pressure!), “Identity” quickly becomes another ironically titled episode ofÂ The Strain,Â and not in a good way.

And then there are the completely ridiculous stories. Why bring back Reggie to kill him off an episode later? Reggie’s ‘redemptive’ arc is about as short-lived as Eph’s Washington romance, and both of them suffer from an incredible lack of material exploring either of these characters and their tragic arcs. Leigh’s “Who are you?” quote is haunting, but it’s not really an intriguing question worth answering: Eph is mostly a series of shifting characteristics tied to an undeservedly strong performance, a man whoÂ The StrainÂ wants to be a sympathetic presence, even as it gloriously depicts his ***hole-ishness with glee at every turn. What should’ve been a fun cat-and-mouse game in a new location for Eph turns into yet another shoddy, contained story that only raises more questions (another eerily-named corporation enters the fray, just in time for Vaughn’s replacement to make a stylized entrance), rather than acting as a way to streamline the untold story of the rest of the world (whose attitude towards New York seems to be “Dang, isn’t that just terrible what might be happening there!”) and have Eph’s new look to embrace the rawer, darker edges of his character, using it to fuel the paranoia and sense of power he’s been experiencing since injuring The Master.

It’s nice to see more things happening in each episode of The Strain,Â but the information flow isn’t keeping up with the plot, and it makes a lot of the smaller stories (Gus and the luchador, Dutch’s complete absence, Eichorst’s disappointment) too vague and obscure to be effective in any sort of way. Save for a semi-entertaining appearance from the Feelers in a church chasing after Nora and Zack, “Identity” too often leaves the audience like Palmer, smirking while we languish on the edges of the narrative, once again waiting for the next ‘stage’ of The Master’s plan to begin, with all the nonsensical developments that come with it.