Home
The Strain
The Strain Season 2 Episode 7 Review: “The Born” 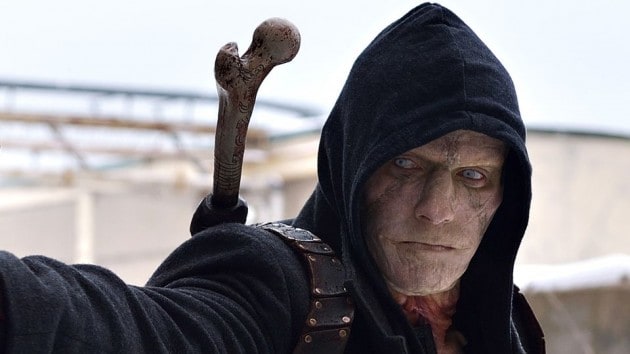 The Strain‘s track record with matters of the heart is less than impressive – be it Nora and Eph, Dutch and Nikki, or Eph and Kelly, the show’sÂ lack of restraint often leads it into awkward, melodramatic places. Knowing that history, it’s no surprise half of “The Born” is dragged down by a Fet/Dutch/Nikki love triangle, complete with all the sad puppy faces and ‘raw’ emoting that it often entails. When “The Born” is able to shed that and bask itself in the darkness of The Master’s most recent hiding place,Â The StrainÂ sparks to life – unfortunately, it doesn’t get to spend its entire 42 minutes there.

The arrival of Quinlan (aka ‘The Born’) is like a shot of lightning directly to the chest ofÂ The Strain.Â Opening with yet another well-crafted flashback prologue, “The Born” immediately establishes Quinlan’s time line and importance. Unlike The Master, Quinlan’s watched the rise and fall of civilizations from the inside, his ability to spend time in the light (albeit with the help of a little dirt sheen) gives him a human element no other vampire has, even Kelly The Persistent Mother. As a day walker, Quinlan’s morality and views of human kind are different – as are his vampire-hunting skills, showing his prowess by taking down a lot of Kelly’s feeler children, something Fet’s gun (dude, stop firing randomly in a concrete room!) and Setrakian’s mythic cane-sword can’t handle. He’s skilled, carries a sword with a bone on the end, and isn’t afraid to whip out a few sub-machine guns for a little added flavor. While his goal is a duplicate of every single member of Eph’s group, the instant burst of personality he brings to the drab decor ofÂ The StrainÂ is much-welcomed (the absence of Gus in this episode also helps – I like his character, but his stories are consistently the most cliche-ridden of the show).

While the former barbarian warrior and Setrakian are getting their first glance as Master Remixed (Bolivar’s lost the wig, and now he grins a lot more – he also doesn’t look like a bad Halloween costume anymore), Eph somehow returns to New York and spends the episode hammered. While it’s a head-scratching development to see Eph mysteriously pop back into New York out of thin air (remember how difficult it was to get out of NY and into DC?), he’s given new purpose with his desire to kill Palmer, the man that’s been foiling his plans to heal the city ever since that fateful plane landed. The proposition may be a little ridiculous – a blitzed Eph trying to assassinateÂ one of the richest men in New York could only be a funnier image if Corey Stoll was still wigging out – but like Quinlan and the hunt, Eph’s murderous quest gives him a purpose The StrainÂ often lacks outside of Setrakian.

Unfortunately, everyone around them is either left floating in stasis – Zack lives forever on his bed, a wrinkled Bolivar poster hung on the wall for irony – or tied up in the Fet/Nikki/Dutch love triangle, a story that is as awkward and stilted as anythingÂ The Strain‘s ever done. Does anybody even care about any of this? On a show about a vampire war, romance is something that works better as a subtle background tool: Eph’s desperate search for his wife in Season 1 and Setrakian’s canned heart being the two examples when pushing a love story to the forefront works in the show’s favor. Dutch’s non-committal attitude, Nikki’s presence as a mostly non-speaking entity making big eyes at everyone, Fet’s sad puppy dog face – none of this works inÂ The Strain‘s favor, effectively dampening Quinlan’s screaming charge at the Master and Eph’s angry drunkenness by trying to turn Fet and Dutch’s brief romance into something tangible and valuable, traits the story clearly is not equipped to carry.

WhenÂ The StrainÂ gets away from the heart and back to stabbing blind, undead children in the head, “The Born” comes to life. Slow-motion shots of Quinlan pumping them full of bullets is even better – now all we need are Quinlan and Eph in the same room, expressing their existential rage at the people who’ve taken everything away from them (lest we forget, Eph was falling in love with Leigh just a week ago), renewing the show’s purpose in the process and injecting the season with some much-needed personality and direction. Time will tell if it can carry that momentum through the back half of the season, but “The Born” proves there’s still a pulse to be found onÂ The Strain, if pressure is applied in the right places.

– Eph runs the gamut from his gunshot being cripplingly painful, to mildly annoying. Make up your mind, man!

– Setrakian ain’t got no time for romance.

– “Complacency is the enemy of empires.”

– Eph’s greeting of Nikki is one ofÂ The Strain‘s single funniest moments: “Oh, the track star!”

– Apparently, this is the first time in thousands of years The Master was forced to take another form, his past changes coming by choice.Â Say Yes to the Meat Vessel, anyone?

– The Master killed Quinlan’s mother; while important, it does not explain how he became an Ancient-esque strigoi, a story I presume we’ll hear soon (no spoilers!).