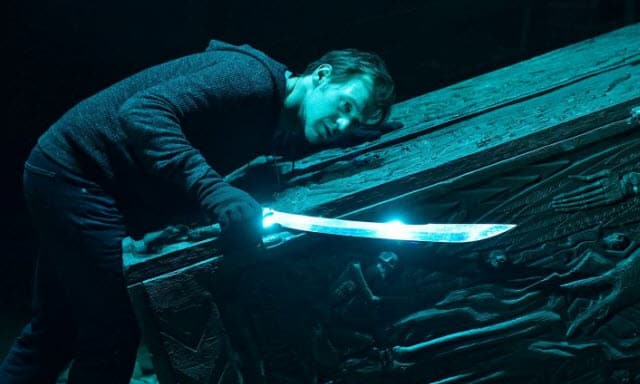 Until The Master makes an appearance in the final moments of “The Third Rail”, the most exciting thing that happens is a train loudly driving pass Eph and his merry band of vampire hunters – hardly the edge-of-your-seat thriller thatÂ The StrainÂ so often wants to be. Set against the dark backdrops of New York’s sewers, “The Third Rail” struggles to justify its own existence for most of the hour: and when it comes to finally getting to the point,Â The StrainÂ really doesn’t have anything new up its sleeve, relying on the same dose of unearned character moments and empty zombie violence (there are three on-screen be-headings this episode, most likely a season high) to drive yet another hour of laughable dialogue and nonsensical story lines.

I’m not sure who thought it would be a good idea to pair up Nora’s mother with Zack for an hour; not only does it put the two most boring characters together, but literally can’t even think of anything for them to do, instead making up a cigarette habit for Senora Martinez, giving the episode plenty of room to put awkward, stilted child acting front and center for the majority of the episode. Not only is this story line stupid (who would leave a CHILD with a woman so afflicted with Alzheimer’s, her daughter has locked her in a basement?), but it literally goes nowhere: in fact, Zack gets two young people killed because of his shenanigans, waking up a vampire zombie (boy, a lot of these vampires are found just sitting around doing nothing; not the most efficient/intelligent bunch, ay?) all in the name of saving a butt-smoking habit clearly concocted by writers who had no idea what to do with the two.

Underground, things are no better: we get the typical jawing between our two alpha males (Fet and Eph), a lot of their scenes relying on horrible dialogue (when walking by abandoned clothes and materials, Nora blurts “It’s everything that defined these people”…. because iPhones and pearl necklaces give one definition in life) and lots of walking around in the dark while Setrakian snorts and breathes heavy. There’s really not much to it all; even when we reach our big climatic moment, learning that vampires nest and The Master is going to go out of his way to destroy Eph’s family (for reasons we are not privy to). Watching Setrakian have a temper tantrum (destroying the sleeping box he made during his internment in the process) is certainly entertaining, but it’s as empty as the hair follicles on the top of Corey Stoll’s head: and for all intents and purposes, “The Third Rail” is like the infamous wig Stoll wears, able to take many different forms in a single hour, but never feeling anything more than a facsimile attempt to recreate reality.

I didn’t really talk about Gus – but what’s the point of talking about a story line so stereotyped, Gus’s dead brother (WHO IS A VAMPIRE) doesn’t do anything but stand in front of the TV watching soccer? After another short hiatus, Gus drops back in to remind us just how awfulÂ The StrainÂ is with minority characters (and characters in general), seemingly existing so he can have a starting contest with Zack (a stranger to Gus) in the middle of an empty convenience store. Simply put, “The Third Rail” isÂ The StrainÂ twiddling its thumbs, never a good sign for a show blind to its own empty characterizations. With nothing but the broadest of beats to hit with anyone (Setrakian’s mad! Fet’s an ass! Eph’s an ass, too! Nora just wants someone to love her!), “The Third Rail” puts all ofÂ The Strain‘s ugly flaws on full display, a thrill-free hour of silly conversations and empty imagery (oh my, The Master has an army of dozens who are all trained to attack one at a time! Everyone be scared) that often struggles to justify its own existence.