Home
Entertainment
The Terry Crews He-Man Meme is Just: You Take a Look 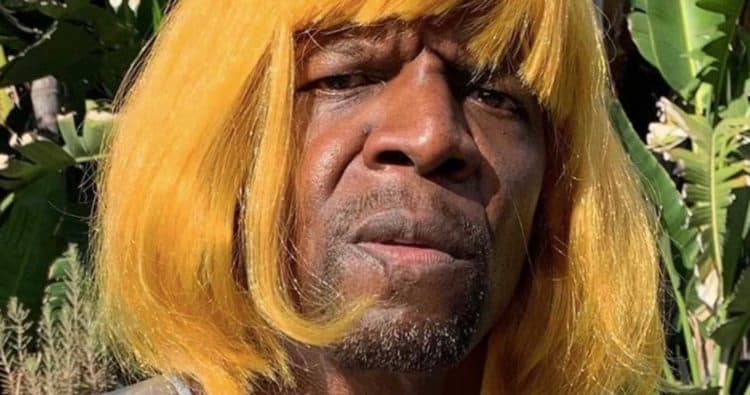 Give Terry Crews some credit, he can rock the He-Man look largely because he’s got the body and the wig, well, let’s just say the wig might need an update. In truth it’s no more ridiculous than the wig he wore when he starred in The Benchwarmers, but it could definitely use a trim. That and all frivolity aside however it’s evident as Jeremy Dick from MovieWeb can make it that Crews is responding in a big and very hilarious way to the criticisms of black women being given roles that have been primarily taken up by white people in the past. As if anyone could forget, this mess started when it was announced that Halle Bailey, a very striking young black woman, was being cast as Ariel in the upcoming live action Disney movie, The Little Mermaid. The overwhelming and unfortunate response by so many was appalling to many, and Crews is striking back in his own way as he’s actually threatened to take the part of He-Man if people continue to persist. Being completely honest, the hatred levied at Halle has been nothing less than ridiculous since debating over whether a fictional character should be one color or another, particularly when they’re coming from a fictional kingdom that is open to a lot of interpretation, is kind of hard to not mock and ridicule as Crews is doing.

The next instance in which people were about to flip their lids came when it was announced that Lashana Lynch would be taking on the role of a black, female Bond character. It’s already been stated that she will NOT be “Jane Bond” but will be taking over the 007 designation. For a lot of people this was simply too much since not only did it seem that certain parts that were written in for white people were being taken over by those of color, but now James Bond was giving up his spot to a woman. To play devil’s advocate for a moment it’s enough to state that in an era where feminism has been seen to be important but also somewhat disruptive when it’s taken to extremes, the Bond issue might be seen from a few different points of view. But first and foremost is that it’s something different, and people tend to react in various ways when their view of something that’s been a commonality in society is challenged in a big way. For instance, Captain Marvel taking over from Iron Man as the new face of the MCU is a big challenge that a lot of people aren’t looking forward to at the moment, but it’s going to happen all the same. Lashana Lynch being the next 007 seems to be another massive change that people are trying to stop from happening, though it’s not likely that it will work.

Terry might seem like he’s taking things to a new and comical level, but in truth there’s only one thing that really matters when it pertains to who’s being cast and what color they are, and that’s the story. While this is a personal belief it’s also a great point since as of now it doesn’t seem as though there’s any indication that Bond or Ariel’s story will be any different, especially considering that the latter is a Disney movie and will likely feature plenty of singing. There’s even a rumor that Idris Elba will be tapped to play King Triton, which would be interesting since he’s a great actor, and his moments of rage on screen can be epic.

But this matter of who’s being cast into what role is a troublesome one, though not in the manner that some people might think.  There’s nothing wrong with Halle Bailey as Ariel, or Lashana Lynch in a Bond movie, as if anyone is being honest, whitewashing has been an issue throughout the years, and this seems like it might balance the scales a bit. Think of projects such as the Exodus movie starring Joel Edgerton and Christian Bale, one who was supposed to be Egyptian and the other who was supposed to be a Hebrew. It seems to go without saying that neither man really exemplified the race to which they were supposed to belong for the movie. This fervor over casting two black women in roles that were reportedly written for white folks is pretty ridiculous, since so long as the story itself isn’t messed with too badly and doesn’t lose its integrity, then there’s no reason to gripe. If anything, the overly feminist lean and the political maneuvering that takes place in movies these days is the real problem. This is entertainment after all, and while it’s subject to political aspects within our culture, it’s still meant to entertain, not push an agenda. That’s what real-world politics are for after all.