Home
Comics
The Time That Darkseid Actually Worked for McDonald’s 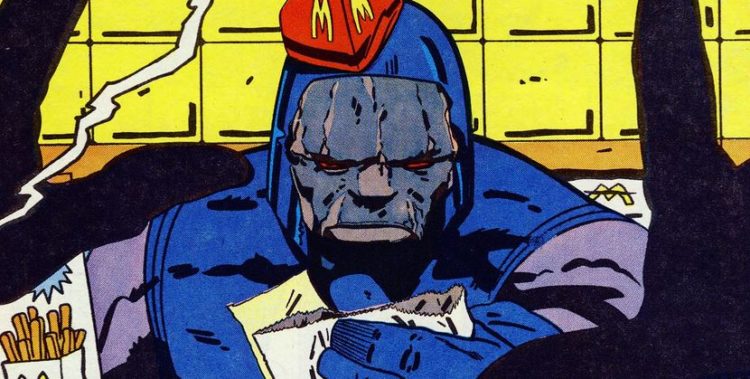 If you’re a true comic nut and a big DC fan then you might remember this particular story when the hero Ambush Bug had his own series and kept running into the notorious super villain Darkseid every so often. Now if you know anything about Darkseid you’d understand that comedy really isn’t his thing, but somehow the ruler of Apokolips kept showing up around Ambush Bug for some reason until the hero popped into McDonald’s at one point for a bit to eat and came into contact with none other than the big stone-faced villain himself wearing a paper McDonald’s hat and getting ready to deliver his food. At that point it felt as though things were being delivered in a way that was bound to reveal a gimmick that was going to be quirky and somehow ridiculous beyond belief, but instead turned out to be one giant tease. The Darkseid that was working at McDonald’s was nothing more than a blow-up doll, which was a big mwah-mwah-mwah moment to the reader. To be fair though it probably managed to fool a few people until the big reveal since the image of Darkseid working at a fast food restaurant was a bit hilarious and goofy to the point that there just had to be something more to it. After all this is Darkseid we’re talking about, the kind of villain that’s been known to take on the Justice League and throttle at least a few of them for good measure in his various conquests.

For quite some time now Darkseid has been considered one of the worst of the bad guys in the DC universe since he’s powerful, he’s intelligent, and he knows it at the same time. Crossing him isn’t the wisest move since if he doesn’t do anything to you it usually means that you’re beneath his notice and can’t possibly harm him in any real way. But then again, if he thinks you’re too much of a nuisance to just run around free then he’s bound to have one of his underlings do the job or swat the offender like a fly. That’s the kind of villain Darkseid has been for a long time, as he’s a fighter, but he’s not the type to just throw down at a moment’s notice because he feels like it. That could have been one of the things that people were wondering about in the Ambush Bug series since the whole idea of Darkseid having a sense of humor was something that’s been done before and is great for a gimmick when it’s not a main part of the story, but it can become kind of needlessly silly if it’s used just for the heck of it.

At this point a lot of fans are probably aching to see the real Darkseid take place in a live action movie, much as it looks like it might have been teased in the much-talked about Snyder Cut that’s supposedly coming eventually. If there’s anything the DC universe really needs, a good villain that takes things to the extreme with barely any effort would be high on the list of priorities. While Steppenwolf was thought to be one of the villains that might have really given the Justice League a hard time, he was negated the moment that Superman showed up, meaning that as tough as Darkseid’s uncle is, he’s not at the same level as a Kryptonian and he’s definitely not at Darkseid’s level either, since ol’ stoneface has taken Superman to the limits before. But then again, Darkseid has been beaten before in the past, and by some of the most unlikely enemies since like a lot of bad guys his level of arrogance is so high that it would take a ladder to reach the top, and even then it’s harder to topple than to see. But all in all Darkseid is by far and large one of the biggest bad guys in DC and seeing him finally show up in live action would be a humongous treat for a lot of fans that have been itching to see the big guy and finally witness him in action.

If and when, and if, he ever does show up on the big screen, one can imagine that a lot of fans are still going to be divided on his appearance, on his power level, and on any other thing they can find that the filmmaker in question didn’t get right somehow. But hopefully there are plenty of fans that will be happy as hell just to see him since the whole idea is to get the character on the screen and worry about his appearance later. Of course if he shows up in a McDonald’s uniform on screen then one can only imagine what the fans would say. Any bets there’d be a riot?