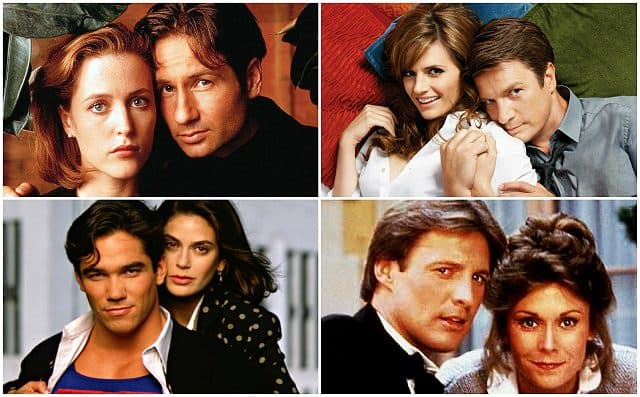 Television is filled with stories of “will they or won’t they” romance, so choosing the top 10 seems like it would be daunting.  Luckily, this isn’t a list about just a couple’s relationship. It’s covering will they or won’t they TV shows.   The difference between these two things are in part one of this article, which you can read here if you missed it.

Since it’s easy to be swayed by a particular couple’s chemistry, I created criteria for ranking the shows where chemistry is just one of several areas to look at.  For one, the primary romance has to have logical follow-through with the relationship while maintaining plot and character credibility.  These are things that will they or won’t they TV shows (or even shows that only employ the “will they or won’t they” idea) can lose sight of.   This seems especially true when some behind-the-scenes issue or issues start stressing out the writers and producers.  Of the ten shows that are listed more than half have some behind-the-scenes drama going on that affects the show’s production – usually negatively – but not always.  It seems that while creativity and skill are factors in pulling one of these shows off, so is luck!  Below are the other points used when rating the shows for the list:

With the above in mind, let’s take a closer look at this top 10 list!

It starred Dean Cain as Clark Kent/Superman and Teri Hatcher as Lois Lane.

The series loosely followed the modern origin of Superman, established by writer John Byrne– where Clark Kent is the true personality and Superman a disguise. As the show’s title suggests, the series focused on the relationship and romance between Clark and Lois as much as the adventures of Clark’s alter-ego, Superman[3] (www.en.wikipedia.org).

The relationship with Lois and Clark was fun, sexy and at times steamy. Everything was going well… until some behind-the-scenes issues between D.C. comics and ABC  had them postpone their wedding – twice.  The first time involved Clark marrying Lois – only it wasn’t Lois.  It was a frog-eating clone – and then the real Lois got amnesia…  This was after the show made a huge deal over the two getting married!  Really, there’s nothing else to say after that.  That, is the worst roadblock, ever.   Eventually, they get married in season four – after yet another delay – but the damage was already done. The show got canceled after its fourth season.

This is the only straight-up comedy on the list.  Fran Fine (Fran Drescher) – a working-class Jewish woman from Queens – certainly wasn’t living in a nunnery before becoming a nanny, nor was she remotely a vocalist.  Nevertheless, the setup for this show is basically The Sound of Music with Fran as Maria.  There were only three kids instead of the von Trapp seven and Maxwell Sheffield (Charles Shaughnessy) is a British widower who is a rich and successful Broadway producer instead of a naval captain.  The only thing he’s trying to escape is the shadow of Andrew Lloyd Webber!

Like the kids in the The Sound of Music, Sheffield’s three children have managed to get rid of a bunch of nannies, but Fran’s working class sensibilities and soft heart – which are so different from the nannies of the past – quickly gets these kids in line.  C.C. Babcock (Lauren Lane) is his business partner and has designs on him – just like the Baroness did in The Sound of Music.

As The Nanny was a sitcom it never got overly emotional or super hot, but from day one it was obvious Fran and Maxwell were meant to be.  It ran for six seasons.  After a series of mismatches on both sides and lots of comic scrapes in seasons five and six Fran and Maxwell do get together, get married, and have a kid.

Even though it wasn’t the first of its type, this is probably the most famous – and infamous – “will they or won’t they” TV show ever.  The one-hour dramedy starred Cybill Shepherd and Bruce Willis as Maddie Hayes  &  David Addison and boasts some of the most fun and creative scenes ever done on television. Granted, many of those scenes owe much to films of the 1930’s and 40’s.

The show’s ratings started to decline after its third season.  The second to last episode of that season had Maddie and David share a wild night of passion.  What created the decline was a series of bad writing decisions caused in part by behind-the-scenes issues, but the timing of the ratings drop created the myth of the Moonlighting curse.

That myth is why so many shows drag out putting couples together and why doing so has become a scapegoat for when a show’s ratings start to decline.   Truthfully, the only sign of a possible “Moonlighting Curse” is that other will they or won’t they TV shows have had bouts of behind-the-scenes issues occur on their shows and those issues have led to the kind of bad choices Moonlighting made.  (See: Castle, Lois and Clark: the New Adventures of Superman, The X-Files, and Bones).

The series finale gives Moonlighting another one of its classic fourth wall-breaking stories.  After an announcement that the show has been canceled David and Maddie try to outrun the set being taken down.  They end up on a church set and walk down the aisle to sit on steps in front of the altar.  There Maddie tells David, “I can’t imagine not seeing you tomorrow.”  The chemistry in that scene is off the charts!  From there it’s a trip down memory lane that chronicles the best of Maddie and David’s relationship journey.  It’s bittersweet, but the sweetness part is perfect.

Because of its importance in shaping how “Will They or Won’t They” TV shows have been done since it aired,  the first in-depth article for shows on the list is on Moonlighting.  You can check that out here.