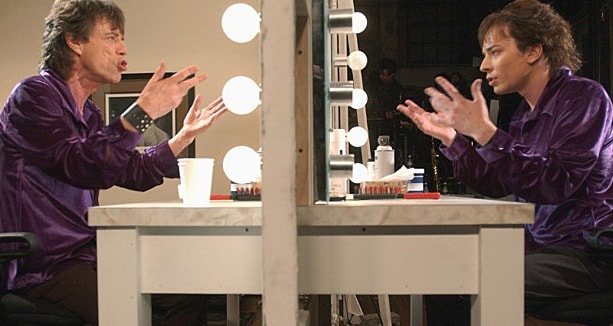 If you really want to know more about Mick Jagger you might want to go to Fandom and take a quick peek at his many accomplishments in order to get a better sense of the man. But if you want to see how much he means to pop culture you don’t need to look any further than the many impressions that people have given of him over the years. From simply emulating his voice to moving in the same way he does a lot of folks have even added his impression to their common stable of impressions as Mickeytales has done. Quite honestly this is something that is to be taken as a form of flattery since Mick Jagger has done so much for the entertainment business that thinking that anyone is going to make fun of him in an aggressive and undeserved manner is kind of foolish and indicative of a very thin skin. Jagger actually answered a good number of questions on the BBC website posed by many different fans and a small blurb included what he thought of those that had impersonated him for years. His reply was pretty even-handed when he said that they were probably pretty good, which shows that as you might expect of any celebrity he’s not too bothered by the whole thing. After all, people tend to emulate stars because they envy or like them, that’s usually a given.

Here are just a few impressions that might be counted among the best. Do let me know if I missed any that you’ve seen and happen to like.

Some people like John Mulaney some don’t think much about him, but the guy can do an impression that’s pretty decent really. Some folks think that pulling off an English accent might be simple enough but so many take it so far that they don’t realize just how silly they sound. But when you’re mimicking Mick Jagger it almost seem that you’ve got to go all out since the guy is after all bigger than life and is the kind of character that demands that someone go a little bit extra when it comes to really impersonating them. John did a pretty good job but he only lasted for a few seconds which is why he gets this spot.

So many people seem to forget that Belzer has done comedy in the past. it could be his time spent on Law & Order for so long that made people unaware that he can be a pretty funny guy. When you look at it though he does have a face that suggests he’s more about drama than comedy, but when he gets up and starts moving around it’s pretty obvious that his sense of humor is intact and is easily one of the best parts of his act. The fact that Rick Overton had to get up and strut his stuff around as well made this kind of amusing since it would seem that Belzer had the better moves but Overton definitely won points for trying.

That strut is just too much since it seems that a lot of people take to walking like Mick as soon as or even before they start talking like him. The customary walk that Jagger does across the stage is one way that people have come to know him since quite honestly no one does it quite like him. Some might like to make fun of him and think that he has palsy because of it, but in all honesty the guy is a showman and has been doing this for so long that it’s become a time-honored movement that many people have tried to do and only a handful have ever really managed to get right.

Jimmy Fallon is all up on this kind of act since he likes to do impressions and he absolutely loves to interact with other stars. He gets a lot of heat from some people for being kind of a bland comedian, but quite honestly he’s earned his stripes when it comes to being one of the most popular talk show hosts on TV right now. The fact that he decided to do Mick Jagger in this fashion was awesome since he did kind of nail it and made a lot of people laugh in the process.

Styles gets points just for going so over the top, that’s it to be honest. There are a lot of people that have done Mick Jagger impersonations but this is one that seems to take the role and run with it since there’s no STOP or SLOW button in sight, metaphorically speaking. Harry just kind of gets out there and hits the gas without checking to see how fast he’s really going and for some insane reason it works.

Now those that can sing like him are TRULY talented.