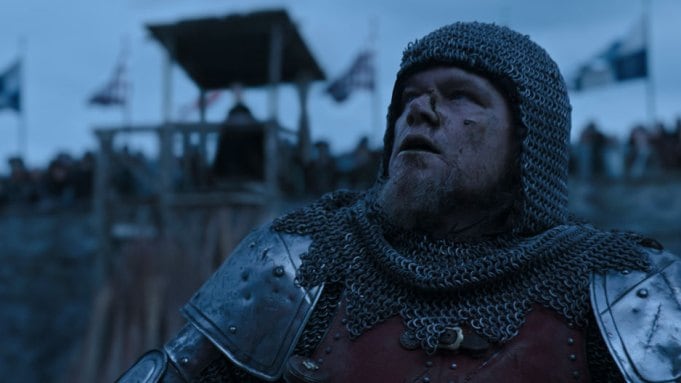 There are certain moments in human history that don’t stand with a great deal of pride, especially when it’s seen that the many problems of the world that have come have been committed at the hands of men. The Last Duel is one of those in which it becomes painfully obvious that men are rather foolish creatures at times, all for reasons that don’t sound reasonable when one looks at them from a different perspective. Looking at how things were back in medieval times though it’s not hard to see how religion and the dominant rule of men did manage to make for a hard life, especially for those who were ruled by these governing forces. In this movie, there will be plenty of both since religion plays a pretty decent part in this story and the pride of the men that are to duel, best friends no less that are torn apart when the accusation made against one forces one to demand a sanctioned duel to the death. The saddest part of this is that the duel is more for his pride than the satisfaction of determining his friend’s guilt when it comes to the supposed attack that his friend commits upon his wife.

The trailer looks epic in a way that suggests that the battle scenes might be gritty, a bit dark, and definitely worthy of attention, but already the idea of seeing Ben Affleck and Matt Damon in a period piece is kind of cringe-worthy. While the story has a definite allure to it, the look of both Damon and Affleck is kind of ridiculous since both men are often better received when they star in anything but a period piece. That’s a personal opinion to be certain, but it’s one that is felt by many people since to be certain, Adam Driver and just about everyone else has the look that makes it feel as though they belong in such a movie, but Damon and Affleck appear to stand out like sore thumbs, so it’s a big hope that their acting, which has been lauded by so many, will be up to the task of making people forget how their appearance looks a bit ridiculous.

This movie does look like it has the potential to be something noteworthy, so it’s a big hope that whatever happens, it will flow in a way that the trailer appears to promote, since otherwise, it might feel like a jumbled mess set in a time when duels and religion were still a way of life. It’s very likely that this won’t happen, or at least that people won’t see it this way since the idea of falling into the story and allowing it to gloss over the otherwise nonsensical moments that might and probably will occur in the movie. This is pretty common since in period pieces something is usually inaccurate due to artistic license or an inability to do the research. However it happens, it’s very likely that inaccuracies will occur, but the biggest issue right now is simply having Affleck and Damon in the movie. Some might wonder about such a comment and even find it divisive, but the overall feeling is that both men are better off portraying modern characters from the past two or three centuries and no later.

Of course, they could crush it and prove me wrong. It’s happened more than a few times according to critics and fans alike, which means that opinion is the only real bastion that a person can hold onto when it comes to how they feel about one movie or another. This time it does feel as though such an opinion will be shared with more than a few people, no matter that many are likely already banking on the idea that Affleck and Damon will be better than some are thinking. The subject of the movie is intriguing, not to mention that it’s bound to be one of the driving reasons that people will be watching the movie, to begin with. Movies and TV shows set as period pieces tend to have the challenge of keeping people interested with excitement, action, intrigue, controversy, and other elements of storytelling that people want to see.

The Last Duel looks as though it’s going to be checking off a few of those boxes right away, but one still has to wonder if the movie will be able to keep the attention of the audience all the way through. Plus, it might be interesting to hear what historians have to say about this story, whether it’s accurate or if there are glaring inaccuracies. For good or ill, it does appear that The Last Duel will be able to provide more than just a controversial tale of a broken friendship. Now, all we need to do is wait and see how it pans out.