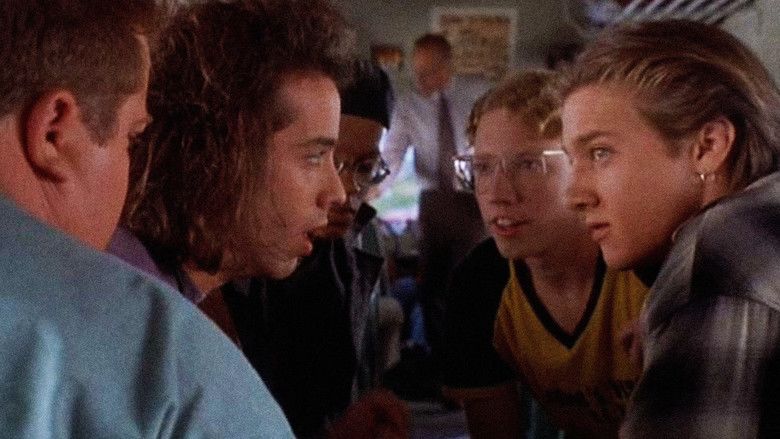 National Lampoon has been creating comedy for years upon years now, longer than some of us have been alive, and it’s been well-renowned for taking on some of the subjects that some folks might see as controversial and others might see as somewhat trivial since in a big way, it’s just a movie. But Senior Trip is one of those that a lot of people might look at now and snort in disgust or simply dismiss out of hand since it deals with a lot of subjects that you simply wouldn’t think of in today’s society when it comes to high school kids, at least not in a perfect society that some folks would like to see. You’ve got open references to drug use, underage drinking, sexuality all over the place, innuendo that doesn’t stop, bad behavior that’s seen as comical and easily justified as the outcry of a generation that wants more from their teachers, and of course a group of teens that takes every advantage they can to party and screw up as much as possible. Plus, you’ve got Jeremy Renner in his younger years, pre-Hawkeye, acting like the proud slacker that knows how to have a good time and takes full advantage of life whenever he can. It’s, well, it’s simply glorious in a hilarious and laugh out loud kind of way that makes some of us pine for the old days.

The main premise of the story has to do with a band of misfit high school kids that are caught using their skip day to trash the principle’s house and are subsequently punished with detention, which, thanks to a sympathetic teacher, turns into movie day as one of them actually performs the task that the principle set down for them, to write a letter to their state representative about the changes they apparently want to see in the school system. When said senator gets hold of the letter he makes a special visit to the school to announce that he’s invited the group of students to Washington DC in order to speak on the president’s education reform, though his true motive is to embarrass the president and thereby pass his own reform bill that will net him a hefty profit thanks to the deal he makes with one of his donors. As you can imagine the students have no clue and are simply glad to ditch school in order to take a road trip to the capital, during which the fun really begins.

Between Reggie being targeted by a Star Trek-obsessed crossing guard and Tommy Chong, aka The Dope King, serving as the bus driver for the trip, there are plenty of things that can go wrong, and of course they do since after stealing enough alcohol from a convenience store the students end up passing out in a drunken stupor while Principle Moss is knocked unconscious after taking a horse tranquilizer that Chong tells him is a car sick pill. Eventually the students do manage to reach DC and by some stroke of luck one of the young ladies is propositioned by the very donor that is in cahoots with the senator that brought them to DC. After stealing his room key and inviting the group and a wide assortment of partygoers to come and hang out the young woman finds a copy of the bill that the senator gave to the donor to look over and figures out the real reason that they were brought to DC. Long story short, they end up exposing the senator and allow the president to save some face as they make an impassioned plea for educational reform, in their own dysfunctional way of course.

The fact that this movie likely wouldn’t be made today is why it’s a treasure and why it’s so horribly underrated. It was a laugh riot when it came out but unfortunately since it didn’t feature a good number of big-name actors at the time it was buried rather quickly and left to sit for a long while. If you happen to get the idea of checking this movie out don’t bother trying to think your way through it since it’s pretty much the type of film that’s going to give you everything up front and spoon-feed it to you, but in the best way possible since all you have to do is laugh. Anyone remember the days when movies were still made that were simply for comedy and not to be taken seriously? This is one of those rare gems you might find if you go looking around in the archives for a bit for something that might tickle your funny bone and little else. The characters, the story, and the action is pretty simplified, but that’s a big part of what makes it great.