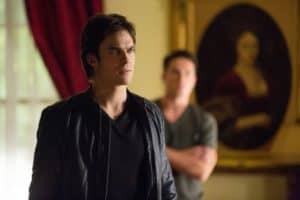 This season of The Vampire DiariesÂ has reinforced the notion that vampires drink blood and kill people; it’s what they do and it’s what Stefan (Paul Wesley) has been trying to protect Elena (Nina Dobrev) from. The thing with vampires is that they are also like a loaded gun (thanks Connor for this one) and you’re just waiting for them to go off and it is this instability that is key to “The Killer.”

It’s been a while since an actual diary has been written in on this show and tonight it was bought back as a device to emphasize Elena’s inner turmoil, while juxtaposing it against Stefan’s own journal entries that are filled with a new hope. They are also there to remind us how important Jeremy (Steven R. McQueen) is to Elena and how his safety is her number one priority.

Connor (Todd Williams) knows that there are many vampires in Mystic Falls, but he underestimates the meaning of taking Jeremy and this leads to his downfall. Elena has proven useful in grand plans before as a distraction and this is the first time that she has the physical strength to defeat someone like Connor. It is still a surprising moment when Elena kills the hunter, though her guilt after the fact is exactly what Stefan predicted. Not something that he foresaw is Elena’s extreme Lady Macbeth moment with blood on her hands and all over the bathroom; are these hallucinations Elena specific or what happens when you kill a hunter?

So to Connor, we barely knew you but you were indeed a formidable foe. I didn’t expect Connor to be killed this quickly and he didn’t get to complete his tattoo. Nor did we get to find out what Professor Shane (David Alpay) was using him for and really Connor’s character has been a device to further the journey of Elena and Jeremy. Firstly he got to be Elena’s first human kill, setting off her guilt spiral and Connor’s significance to Jeremy is that he has touched upon the vampire hatred that Jeremy has experienced in the past. Connor further adds to this by mentioning a conversation that Jeremy had compelled away and this has clearly angered the younger Gilbert. Finally in regards to Jeremy, Connor’s death has given Jeremy some new body art; yep he now bears the start of the hunter mark. It’s a shame that Connor has been disposed of so quickly to move the story along and I hope that Professor Shane fills the ambiguous villain role in the coming weeks. 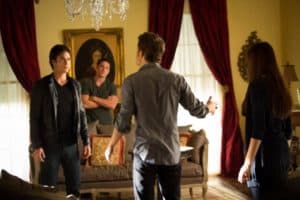 The strongest relationship of this show is also the most contentious and this week we get to see fighting, snarking, chest pounding and offers of help. Yes I’m talking about Stefan and Damon (Ian Somerhalder), who are opposing in so many ways but will also always have the others back. This is why scenes between this pair are often my favorite and when they work together my enjoyment factor goes up. At the beginning of the episode they couldn’t be further from working as a team; Stefan has the Klaus (Joseph Morgan) secret and Damon wants to kill Connor. By the end, when Stefan reveals that there is a potential cure out there and they discuss their options over whiskey we get to the heart ofÂ The Vampire Diaries as it’s not just about two guys who love the same woman, but it’s the story of two brothers.

Stefan’s reasons for wanting the cure for Elena might be read as selfish, especially as Damon says he’s fine with her either way. How I’ve interpreted this confession is that Stefan understands the pain and lack of hope that Elena is feeling and so he is looking at it for her and her alone. It’s understandable why they won’t be revealing this potential cure idea to Elena at the moment, but it’s a little infuriating that she will be kept in the dark once again about something that will have a huge impact on her life. At this moment Elena doesn’t feel like she can trust Stefan, even though he had her best interests at heart and the distance between them is growing with each episode. Is their relationship beyond repair at this point? 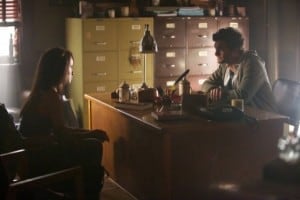 -At the moment Professor Shane is filling the ‘suspicious but unclear of motives’ role but is keen to see Bonnie return to her magic practising ways. Professor Shane also wants Bonnie to remain safe so his hypnotherapy session acts in both of these departments, as this prevents her from helping with the hostage mission.

-I worry that April’s brain is like Swiss cheese after all of the compulsion she has had in the short space of time she has been back in Mystic Falls. It’s probably a very good thing that Jeremy gives her a vervain bracelet.

-April hasn’t forgotten about Rebekah (Claire Holt) though and ends up as a hostage thanks to her questioning Matt (Zach Roerig) about where Rebekah is; Matt is unsurprisingly prickly when Rebekah’s name is mentioned.

-The use ofÂ Yeah Yeah YeahsÂ ‘Tick’ was a rather inspired musical choice when the first bomb blew up.

-Alaric’s apartment! Yes it is nice to go back to this wonderful set.

-I’m not entirely sure how I feel about Hayley (Phoebe Tonkin) at the moment, especially after how she spoke to Caroline (Candice Accola). Do you believe Tyler (Michael Trevino) when he tells Caroline that he hasn’t slept with Hayley and he just wanted to make Klaus think that he had?

Klaus threatened to throw the sword in the ocean if Stefan told anyone their secret and so you can count on him not being too happy when he returns to find that Connor is dead. It is imperative to Jeremy’s safety that he doesn’t reveal that he now has the mark; it’s invisible so that helps. Elena has a lot to contend with, especially with the bonus hallucinations and because she is currently feeling that she can’t trust Stefan, will these feelings become magnified?

Next week: extreme visions and a familiar face returns. Watch a promo here and for the promo photos head here.