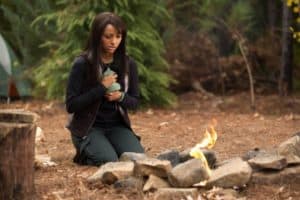 Have the characters from The Vampire DiariesÂ never seen a horror movie? Or even listen to their advice about not splitting up? This is exactly what happens on their magical island mystery tour and it leaves the episode feeling as scattered as the characters. The cure feels close now they have all the components to find it, but thanks to some nefarious actions it will take some time before it is found.

This episode has a huge amount of exposition and it wasn’t always conveyed in a succinct way with Shane (David Alpay) as our narrator. The problem here of course is that we don’t know how much we can trust the good Professor and we’re basically put in the Damon (Ian Somerhalder) sceptic position; so why should we believe his tales of Silas and Qetsiyah? Damon quite often plays the role of non-believer and there seems to be several reasons why he is having problems with Shane and this cure story; partly it is a trust issue and if there is a cure then Damon believes it will change everything with Elena (Nina Dobrev).

Elena pleas with Damon, first of all declaring that even though the sire bond will broken she will love him no matter what and then she offers the suggestion of taking the cure together. Elena thinks this is a romantic gesture, but her tone hints that it is more desperate than that and the real kicker is that Damon doesn’t want the cure. Damon doesn’t talk about the pain and suffering of being a vampire as Stefan (Paul Wesley) does, in fact Damon is the one vampire who is more than happy with whom he is. To Damon it is being human that will bring pain and suffering so the cure isn’t an option he wants. Are the cracks beginning to form is this new relationship? Elena’s reaction to Stefan’s reasons for wanting the cure are curious and could be a sign that she might be regretting her choice. 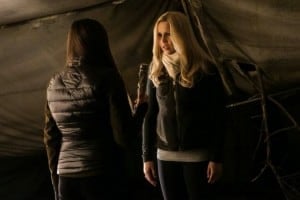 One pairing that are not a couple as such, but have a lot in common are Rebekah (Claire Holt) and Stefan and even though Stefan has to play referee with Rebekah and Elena they also have a couple of really nice moments together. This includes another discussion about becoming human and they both share similar feelings on the pain of being a vampire; they don’t relish in their vampire status as Damon does. There is also romantic tension between them that could boil over again, even though I don’t think that they will go beyond the hooking up stage.

Rebekah is now constantly aware of potential betrayal, something that has increased with each time she has been daggered. That’s why it isn’t surprising that she has issues with Elena and this group of people in general, as even Stefan has been part of these plans in the past. Rebekah also does a good job of pointing out that for all the terrible things that she has done, they have also killed two members of her family too and this hints at the murky moral code of Elena et al when it comes to protecting family. Now Stefan, Elena and Rebekah have to work together as everyone else is gone and this is a dynamic that could be a lot of fun. 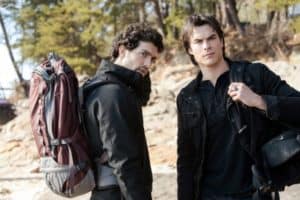 One issue with this episode is that because everyone ends up separated across the island, the story also feels disjointed. It doesn’t help that we have this huge information dump and even though the Shane flashbacks are intended to break up how this information is given, it still feels disjointed.

They are all pawns at the moment in Shane’s master plan and despite Damon saying he won’t allow himself to be manipulated by Shane’s comments about his relationship with Elena; Damon still ends up alone in the woods at the mercy of another mysterious Hunter. Bonnie (Kat Graham) is also being used by Shane and it turns out that she is a descendant ofÂ Qetsiyah (no surprise there). Shane has tied himself to Bonnie by claiming that without him she might die and this irritatingly means that even though Bonnie is the one with the power, she isn’t in control of what she does with it.

Back in Mystic Falls we get a confrontation between Klaus (Joseph Morgan) and Tyler (Michael Trevino) with Caroline (Candice Accola) ending up as getting caught in the middle. There was a lot of posturing between Klaus and Tyler, which is to be expected after Klaus killed Tyler’s mother. Caroline was there to remind Klaus that he does have humanity and while I didn’t think Caroline would actually die, they pushed it as close as they could before saving her. When Klaus is released from his temporary imprisonment it will be intriguing to see if this experience will change his desire for revenge after Kol’s (Nathaniel Buzolic) death.

– Stefan says that he is not going to let the tombstone out of his sight, except when he leaves it in his tent. Silly Stefan.

– Shane and Damon are meant to be keeping an eye on Bonnie when she does her locator spell; instead they have a ‘discussion’ elsewhere. Of course Shane is trying to divert attention away, but Damon does a terrible job of reading the situation.

-The traps were a fun touch, Rebekah saved Elena and Stefan saved Rebekah (even though it wouldn’t kill her anyway). Rebekah’s reason for saving Elena is amusing “If you’re going to die, it might as well be epic.”

-Rebekah is scared of haunted places, despite being an Original.

-Elena on Rebekah being evil “Technically you didn’t achieve evil status until you killed me.”

-Is Shane planning another sacrifice on the island?

-Shane’s chat with his dead wife reminds me of the First Evil inÂ Buffy the Vampire Slayer as we can’t really trust that this is actually his wife who he is talking to.

It is only natural for characters to scatter after they are warned to stay together, but sadly on this episode ofÂ The Vampire DiariesÂ this also meant that the story suffered as it felt fragmented. Now that we know for certain that Shane has been planning to only have Bonnie and Jeremy (Steven R. McQueen) with him, hopefully the story will feel more coherent next week. Damon is off on his own and will have a less than friendly Hunter to contend with and the merry band of Rebekah, Stefan and Elena will try to come to their aid.

Watch a preview of next week’s episode “Down the Rabbit Hole” here.