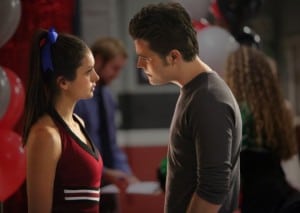 The atmosphere definitely feels colder onÂ The Vampire DiariesÂ (had to get aÂ Bring it OnÂ reference in there somewhere) since Elena (Nina Dobrev) ‘turned it all off.’ This was a necessary action when Elena became so overwhelmed after Jeremy’s (Steven R. McQueen) death and an Elena with no emotions is very different to what we are used to. This givesÂ The Vampire DiariesÂ a chance to make Elena unpredictable to both the audience and to her friends, upping the stakes (no pun intended) in the process.

Manipulation is a key theme this week; Elena feels like she is being manipulated by everyone around her so she does the same back to them. This includes using her sexuality and a lack of inhibitions means that nakedness isn’t a problem for Elena. Stefan (Paul Wesley) compares this to Katherine, a comparison that Elena isn’t a fan of but one that is right as we’ve seen Katherine pull this shower move in front of Damon (Ian Somerhalder) in the past. Even if Elena isn’t acting like herself, she knows exactly what her friends want to hear which is why she is so quick to agree to the (terrible) back to school plan. This is all part of a bigger scheme to get them off her back and while she might not have factored in Stefan vervaining her she still manages to get what she wants – an exit from Mystic Falls with Damon.

Nina Dobrev is terrific playing yet another version of this character and there is a robotic quality to everything she does, even when she is dancing and meant to be having fun it looks like someone who is playing the part of the fun party girl. Elena is simply going through the motions and despite claiming that she feels amazing, there is clearly something missing. Stefan explains to Caroline (Candice Accola) that this is the worst version of Elena and it is Caroline who Elena ends up hurting the most. Stefan has been at his darkest and he doesn’t rise to any of Elena’s baiting, instead he uses sarcasm as a defense mechanism (and sarcastic Stefan is my favorite). Caroline has never been at this low point and she still has a human connection with her mother and this is a weakness that can be exploited by Elena. 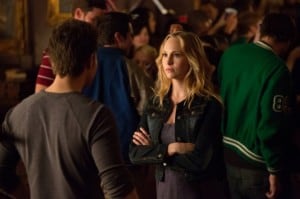 It’s one thing to see Elena attack a random stranger, but it is another to see her attack her best friend. Dropping Caroline during the cheer routine is a warning shot, but the fight in the woods shows how far gone Elena is as she almost stakes her best friend. Caroline has been a vampire in a way that Elena couldn’t; she embraced her new side and hasn’t had the same level of issues that Elena encountered. As I mentioned above Caroline still has a mother and this is something that connects Caroline to who she was before she turned, Elena no longer has this.

Elena knows that Caroline is vulnerable when it comes to Tyler (Michael Trevino) and Klaus (Joseph Morgan) and along with attacking her mother this is the area that Elena targets. There must be some small aspect of envy as Elena confronts Stefan and Caroline when she sees that they are having fun at the party dancing. Elena tells Caroline that she should take Stefan out “for a spin” which just seems like a way to cover up any kind of feelings that might be creeping in. While I don’t want anything romantic to happen between Stefan and Caroline their party scenes are a joy to watch; I friendship ‘ship them.

The one person who we have seen act in this carefree way before is Damon and he tries to justify to himself and everyone around him, that this Elena might not be the worst thing. The lack of emotions means that the sire bond no longer works; a positive notion for Damon as he can be with Elena without worrying that it is due to the bond. Damon makes it seem like he is taking Elena to New York for selfish reasons, but after his encounter with Will it looks like this is all in aid of the cure. Damon has convinced those around him that he doesn’t want to find it, but does he have a bigger plan? Not all the manipulations in this episode have characters using their sexuality, some are just old fashioned misdirects.

The same can’t be said for Klaus and Hayley (Phoebe Tonkin) who both attempt to use sex as a manipulation tool. It’s hard to say who is the victor here; they both attempt to Psych 101 each other and they both get some of the information they want. New Orleans is an important destination and we know that both Hayley and Klaus will be in the Originals spinoff so this is not a surprise. The stakes are low here thanks to this knowledge, but it does give a chance to see if there is any chemistry between this pair and I would say there is oodles of it. 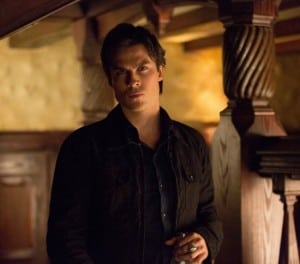 Stefan realizes there is a bigger problem as he figures out that the missing blood from six separate blood banks is probably Silas. Damon has skipped town with Elena and this leaves less defenses at home; just how vulnerable is Mystic Falls this time?

– There is some closure between Caroline and Tyler as he has sent her a letter saying he can’t return. It is unclear whether this is actually the last we will here from Tyler, but this is a really terrible way for Caroline to end a day where her best friend has almost killed her.

– Tyler has left his mansion to Matt (Zach Roerig) which means it’s the new safe house in Mystic Falls and so far Caroline is the only vampire to be invited in. I think this will prove to be very useful as more danger approaches.

– Did Damon convince Rebekah (Claire Holt) that she doesn’t want the cure with his whole ‘being ordinary sucks’ speech? I think Rebekah wants to be ordinary after 1000 years of being an Original (and with nearly 100 years in a box).

– Klaus’ reasons for painting are as sociopathic as you would expect; he likes that he can control the outcome through a “sheer force of will.”

– Things that Klaus sucks at includes “Finding Katherine, ever.” Hee.

– The vervain in the Mystic Falls water supply is going to provide an obstacle when it comes to getting the town to forget certain things that they might see. The lack of blood in the hospital also reduces where they can feed from; bunny diet anyone?

There are new challenges and problems for the folks back in Mystic Falls and a road trip is under way for Damon and Elena. This season ofÂ The Vampire DiariesÂ has been pretty uneven, but this change in Elena feels like it could reinvigorate it. The hunt for the cure continues, but there is also the danger of Silas lurking and the Originals spinoff to set up. As we head into the last third of the year, there is a lot of potential and I am once again excited by this show.

Watch a promo and check out photos for next week’s flashback heavy episode “Because the Night” here and here.