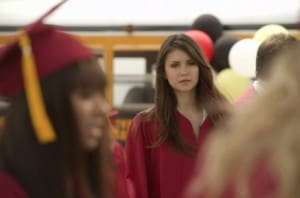 The season 4 finale ofÂ The Vampire DiariesÂ is a bittersweet affair as they finally graduate high school and have to say goodbye once again to those who have briefly visited. Some deaths are more permanent than others and because this show likes to twist and turn at every move, particularly in the last episode of the year there are multiple reveals and declarations.

Let’s start at the end and the BIG revelation; there’s a reason why we haven’t seen Silas’ true face (or at least at a time when we didn’t think he was imitating Stefan) and that’s because he looks like Stefan. Stefan is Silas’ shadow self, a doppelganger who can die as Silas can’t (nature likes balance). This is why you should not rely on your ghost friend as a getting rid of the big bad partner, especially when you’re on a time limit and Stefan has now been disposed of. Not forever disposed of, but he’s going to have a terrible time in his watery grave until they figure out that Stefan is not really Stefan. This sets up a big issue for them to deal with next season and instead of Stefan brooding in Australia in a yurt, he’ll have plenty of time to contemplate his heartbreak under water.

Elena told Damon that she loved him and this time it isn’t sire bond related; Stefan is devastated by this declaration (reflected by some in the audience) but he does tell Damon that he is “not NOT happy” for Damon. The Elena and Damon relationship never really got started this year and this gives them the chance to explore this dynamic when Elena is free to make her own choices. While I would have maybe preferred to see a finale where Elena doesn’t have to choose between brothers, I do understand from a storytelling perspective why they opted to have her make this decision. It will be interesting to see how Silas as Stefan interacts with them as a couple and whether this will give his imposter status away.

While I’m on the subject of a shadow self (is this the first time this show has used this phrase?), Elena had a huge tearing up the building fight with Katherine. Katherine believes that Elena has basically taken everything that is good and left her with nothing. Elena finds this hard to comprehend considering Katherine killed Jeremy and they fight each other hard. Just when it appears that it might be lights out for Elena she reveals the ace up her sleeve, or rather cure up her sleeve and shoves it in Katherine’s mouth. Now this is a superb twist as like Damon, Katherine is probably the last person who wants to give up her vampire status. 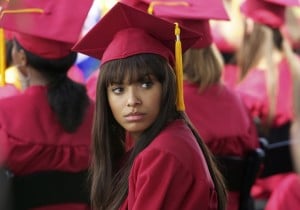 Another person who is going to have to come to terms with their human self again is Jeremy and while his adjustment period won’t be as dramatic as Katherine’s will be, he does have a huge secret to keep. Bonnie has asked that Jeremy doesn’t reveal that she has died to Elena and Caroline. The only other person who knows is at the bottom of a lake and so the burden is all on Jeremy. Jeremy’s death was one of the most dramatic moments this season, especially as it led to the no humanity Elena arc so his return feels like a bit of a cheat. I’m glad that Elena has a member of her family back but there is also a part of me that would have preferred to see Alaric or Lexi getting to stay.

The Originals might be getting their own show but they did get to have some meaningful romantic moments with the teens of Mystic Falls. Klaus returned at the perfect moment and showed that a mortarboard can have more than one purpose. He also took the time to save Damon’s life (off screen) and tell Caroline that Tyler could return to Mystic Falls; his reasoning being that Tyler is her first love and Klaus will be her last. This leaves enough room for crossover potential and Michael Trevino can come back to the show. Rebekah got to share some sweet scenes with Matt that also involved a pressure sensitive bomb and her ex boyfriend. Rebekah’s path toÂ The OriginalsÂ is unclear and I have enjoyed how they have developed Matt and Rebekah’s relationship this season. Matt finally gets to leave Mystic Falls and go on an adventure and if there is anyone that deserves this it is him. 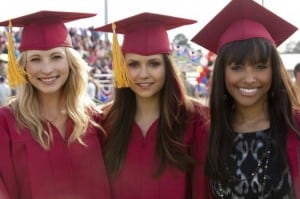 One scene that highlighted the bittersweet nature of this finale was the graduation ceremony as they all made it through high school and got to share this moment together. No one knows that Bonnie is dead so she has to lie about her tears, but thanks to the Olivia Broadfield song that accompanied this scene I too was a little misty eyed. It’s not like they have attended classes much this year, but the show will be losing one its central locations (and the annual decade dance).

– Stefan has graduated an impressive 17 times. Flashbacks to his other high school experiences please.

– Why Lexi needs to stay: she gets drunk and dances to Bon Jovi, she makes Stefan smile (see the first reason), she gives Stefan great romantic advice (there is more than just one ‘the one’ out there) and she’s not going to waste her time on the person who killed her.

– Why Alaric needs to stay: he’s good at saving Damon’s life, he’s very protective over the Mystic Grill (“this is my bar pal”), like Lexi he is also a great drinking partner, he’s happy when his best friend gets the girl.

– Both Alaric and Lexi left mid conversation leaving both Stefan and Damon alone, this felt more devastating than a big teary goodbye.

– Stefan wins line of the episode: “I should be upstairs grooming my hero hair.”

– The ghosts dying and regenerating made me think of a computer game.

– Kol almost gets to have his revenge on Elena but the veil drops just in time.

– I’m impressed that the graduation ceremony was so well attended considering the mortality rate at this high school.

What did you think about the finale? What will become of Katherine now that she is human again? Happy to see Jeremy return?

The Vampire DiariesÂ has already been renewed for a fifth season and should return in October. For more information about The CW’s 2013-2014 schedule,Â click here.

Be sure to check ourÂ Vampire DiariesÂ pageÂ over the summer for news about the upcoming season.