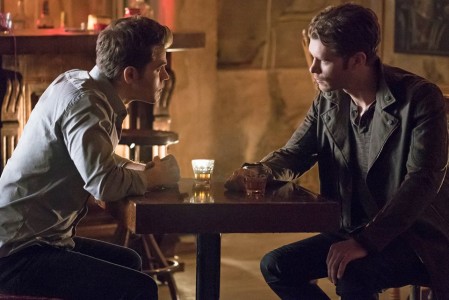 I had such mixed reactions to this pretty wild episode of The Vampire Diaries. Yay for Klaus’ crossover and all the cool things it led to. Ditto the new little family’s adorable road trip. Huge props to Bonnie for being a resourceful BAMF in times of distress. Two thumbs down for the introduction of yet another secret supernatural society, and even worse was making Enzo involved and even related to that drama. Boo!

Let’s focus on the positives though. Stefan was on the move from Rayna now that he’s been marked as her next target. He literally couldn’t even stop for 5 minutes to buy a cell phone charger at a gas station before this Huntress caught up to him. That’s just crazy to me because what if his car ran out of gas and he had no other option but to stop briefly. Anyway, with the help of Valerie he was on his way to New Orleans where there’s a safehouse protected against magic. Who else does he happen to call while he’s in town? Klaus Mikaelson, of course.

The Klefan bromance goes way back, actually almost a full century now. The two have a lot to catch up on over a few drinks until Stefan’s real motivation for coming to visit bleeds through his shirt. Klaus furiously reacts because he recognizes the phoenix sword mark instantly. He has a good reason to be mad. He has family including a daughter to protect in New Orleans on top of worrying about conspirators working to kill him. The last thing Klaus needs is another crazed enemy anywhere near him.

That’s where Caroline comes into the picture! Klaroline fans must’ve been swooning over that phone call. It was so sweet to see Klaus genuinely concerned about Stefan and Caroline both separately and together. Dare I say Klaus is a Steroline shipper?! Caroline notably kept saying over and over to Klaus that the babies aren’t hers but like Klaus and anyone who’s ever met Caroline knows, she’s never walking away from them. She’s not just their surrogate mother, and the proof is in her actions. She insisted on accompanying Alaric on the drive down to Dallas and all along the way she was already researching nannies in the area. Apparently she played a role in scoring the house for Alaric (probably by compulsion) too. Their chemistry came out of nowhere and maybe it’s the whole family package that seals the deal for me, but I’m on board for this relationship. Sorry, Stefan.

Damon and Bonnie were having quite an adventure themselves back in Virginia. For some odd reason they thought trusting Enzo at some secret society known as the Armory. I was already rolling my eyes at this point because nothing good ever comes from these things. It shouldn’t have surprised Bonnie and Damon that Enzo was working with the bad guys. When Enzo had Damon locked in a room with a comatose Tyler Lockwood (Hey! He’s back!) Bonnie had to take matters into her own hands. Well, she was out of luck with using her magic since Enzo injected her with something to inhibit it so she returned the favor by CHOPPING ONE OF ENZO’S HANDS OFF! The cut to commercial there was so perfectly timed, I could not believe she just did that. Strangely enough though Enzo ends up with his hand back. Now we know the powers of vampire healing also work on amputations.

All of this leaves us with Damon planning on “taking himself out of the equation” so as to protect his brother and best friend from always trying to save him. While I respect his intention here to not want anyone to die for him, I don’t think his friends will be any better off with Damon staked in a coffin for at least 3 years. I’m assuming that’s what he’s thinking of doing since the flashforwards started with him being awoken by Stefan. Stefan, who is still on the run from Rayna in 3 years. On The Originals side of this crossover event we saw Freya help Stefan with his Huntress problem by offering some sort of mystical clay that covers the mark and himself from being found by her. Guess that protection wears off eventually. I only wonder now how much of these lost 3 years we’ll get to see, and in what capacity. I would love to see how Caroline and Alaric’s relationship progresses as they settle into their new life with kids but I doubt we’ll actually get to see much of this domestic bliss.

What did you think of this episode?

The Vampire Diaries Season 7 Episode 14 Review: "Moonlight on the Bayou"

Everyone is scattered from New Orleans to Virginia in the first part of The Vampire Diaries and The Originals crossover event.