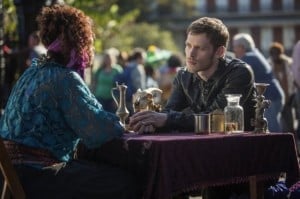 The Vampire DiariesÂ is heading to New Orleans tonight and this episode will serve as a backdoor pilot for the potential Originals spinoff. Klaus has been sent a warning that a witch is plotting a major scheme against him so he travels to Louisiana to track down the offending person. Here we will meet some faces from Klaus’ past, as well as catching up with Hayley who is attempting to discover more about her biological family.

At the end of last week’s episode Klaus received a letter from Katherine and she revealed that someone was planning something against him in New Orleans. In the letter she suggests that his time would be better spent on someone who is actually trying to harm Klaus, rather than chasing her for another five centuries. Klaus told Elijah that he wouldn’t grant Katherine her freedom even if Elijah gave Klaus the cure and so Klaus had to go about getting the cure in another way to stop Silas from tormenting him. Luckily for Klaus, Silas can pretend to be anyone and so he used Rebekah’s desire for the cure and managed to trick Elijah into relinquishing it.

Rebekah and Klaus were barely on speaking terms prior to this deception, but this has broken their already damaged bond. In fact Klaus has a terrible relationship with all that are meant to be close to him and as he heads to the city he helped build he will discover that his protÃ©gÃ© Marcel has everything that Klaus ever wanted; power and respect. Klaus has the first part and thanks to his hybrid status he’s pretty unstoppable. Marcel is a vampire that Klaus turned and while he has power, he doesn’t have the same level of Klaus but he does control both human and supernatural beings in New Orleans. Klaus doesn’t play well with others when they have something he wants and even though they have this past connection there might also be a power struggle.Â It sounds like Klaus will need Marcel’s help if Katherine’s warning about a witch in New Orleans being after him is correct. Which of Klaus’ misdeeds is the reason for this vendetta?

Another person who is dealing with a powerful witch is Hayley and this is a result of her searching for information about her parents. Last time we saw Hayley was in “Bring it On” when she hooked-up with Klaus and he let her know that New Orleans could hold the answers she has been looking for. Is this witch the same one that is after Klaus?

It won’t be all Originals tonight as Katherine will take this opportunity to return to Mystic Falls knowing that she has sent Klaus on a mission to New Orleans. Here she will interact with Rebekah and will find a surprising vulnerability in the one Original sibling who stayed in Mystic Falls tonight. As you can see in this sneak peek she will also turn up at the Salvatore mansion where Damon and Stefan are waiting for Elena to get desperate for blood so they can try their new “fix Elena” plan.

Are you looking forward to the Originals spinoff?