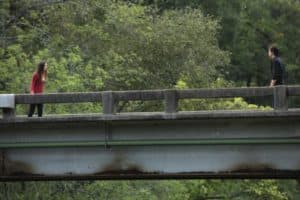 Elena killed her first human in this week’s episode of The Vampire Diaries. Â Connor took Jeremy, Matt and April hostage at the Grill and Damon and Stefan argued over how to handle the situation. Â Because Stefan knows about the vampire cure (which he’s been instructed to keep secret), he wanted to diffuse the hostage situation and keep Connor safe at the same time. Â Damon, on the other hand, wanted to charge in with guns blazing.

Stefan drugged Damon to keep him out of commission for a while and went into the Grill. Â Unfortunately, the situation became even more dire and eventually Elena joined the party too. Â Stefan was able to spirit Connor away, but he was interrupted by Damon, who wanted to know why his brother was making secret deals with Klaus. Â This forced Stefan to tell Damon about the curse, but neither vampire could stop Elena from killing Connor. Â And now it seems like Jeremy has become the new “map” to the cure.

Elena’s traumatized after her first kill and now she’s suffering from hallucinations that will carry over into next week’s episode, causing her to make some dangerous mistakes. Â Meanwhile, Stefan and Klaus guide Jeremy as he begins a new chapter in his life and Matt clues Damon in on some disturbing information about Professor Shame.

Watch a trailer below for the November 15 episode of The Vampire Diaries. Â Visit our Vampire Diaries page for photos, spoilers, reviews and sneak peeks for the show.