Case in point: promo photos below for the February 3 new episode of The Vampire Diaries. Nina Dobrev is rockin’ the Katherine look. Seriously, it works for her. The dress, the hair, everything. The boys, on the other hand…let’s just say the floppy hair isn’t doing it for me. I like them better in black in the present where they look more polished. But that’s just me. And don’t start throwing stones at me, I still love them. 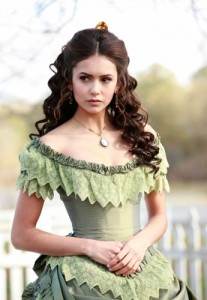 MORE SECRETS OF THE SALVATORE FAMILY HISTORY ARE REVEALED

In the present, Bonnie’s (Katerina Graham) date with Ben (guest star Sean Faris) takes a frightening turn. Elena (Nina Dobrev) helps Stefan as he and Damon race to find the missing journal that belonged to Elena’s ancestor. Stefan learns the reason behind Alaric’s (Matt Davis) interest in both the journal and the town’s history.

Damon discovers that an old acquaintance has returned to town with an agenda he understands. Steven R. McQueen and Sara Canning also star.