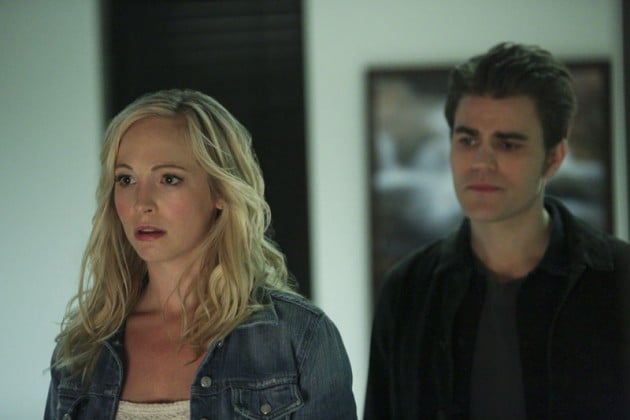 The Vampire Diaries felt like a throwback to its simpler days as we said goodbye (and/or see you later) to two characters who have been with us since the beginning. Â Only one of these send-offs is permanent, which accounts for all of the tears shed.

Deaths donâ€™t always stick on this show because of supernatural loopholes. Â Jeremy is living proof of that matter, but more on him in a little bit. Â Liz Forbes deserves our full attention as this is more than likely the last weâ€™ll see of her. Â Sheâ€™s survived longer than every other parent, which says a lot about her character. Â She knew about the vampires early on in the first season, yet she befriended them anyway. Â Heck, she even called Damon one of her best friends. Â I complained that her cancer was really being drawn out but now that the deed is done, I wish we had more time with her. Â More specifically, I wish Caroline had more time with her mom.

Damon happened to be the last person to talk with Liz before she fell into a coma. Â They both must have sensed that her end was near, as she got to talking about her regrets and wishes. Â They had been investigating her cold cases at work, most of which Damon easily claimed as his doing. Â Elenaâ€™s parentsâ€™ accident never quite added up so they attempted to dig deeper into that case, only to find it was truly a freak accident. Â This only made Liz frustrated because she wished there was a supernatural cause or one specific person to blame. Â Once she started talking about how sheâ€™s â€œexceptionally ordinaryâ€ and Caroline is â€œextraordinary,” I completely lost it. Â All I know is Damon is writing her eulogy to make up for never going to his own motherâ€™s funeral. Â Next week is going to be the absolute saddest episode. Â We thought we watched beloved characters die before, but we know thereâ€™s no coming back from this.

Caroline was so focused on making everything perfect for her momâ€™s last days, but thatâ€™s where she was wrong. Â No one, not even a vampire, has control over a natural death. Â Stefan will no doubt continue to be there for her. Â Their first kiss was so sweet, and I just love that their relationship is so refreshing. Â For a show in its sixth season, it really does amaze me that this friendship is slowly blossoming into something more. Â It almost makes you forget about the silly love triangles of their younger years because now this actually feels serious.

I do have to wonder if it’s a coincidence that Lizâ€™s death is bringing up memories of Stefan and Damonâ€™s mother. Â It does make plenty of sense that watching Caroline grieve her mother would invoke feelings about their own motherâ€™s death. Â That could be the extent of the mentions, which I would be fine with. Â All Iâ€™m saying is it feels like thereâ€™s potential for there to be more to this story.

Letâ€™s just say I would much rather learn about the mysterious Mrs. Salvatore than see Enzo play any more of his games with Sarah Salvatore. Â Heâ€™s becoming so irrelevant to everyone else in Mystic Falls that itâ€™s actually kind of laughable. Â When Enzo was introduced, he seemed like a worthy villain. Â Heâ€™s turning out to be among the lamest of the Big Bads with his confusing scheme to mess with Stefan by essentially torturing Matt in the process. Â I just need Matt to speak up to his vampire friends about his other vampire bully so they can squash this nonsense as soon as possible.

Last but certainly not least, Jeremy left Mystic Falls. Â Heâ€™s alive and well as heâ€™s headed off to â€œart schoolâ€ which is a joke in itself. Â Elena and Damon have to compel his high school principal to let him graduate early, where it even comes out that they had to compel his admissions officer for the school in Santa Fe. Â All that matters is Alaric knows what Jeremy is really up to, and it has nothing to do with art. Â Heâ€™s taking up vampire hunting on his own. Â Alaric will send him any leads he gets, and of course Jeremy asked that he calls him if Bonnie ever returns. Â I can safely say I wonâ€™t necessarily miss Little Gilbert. Â He wasnâ€™t doing much ever since he came back from the dead for the third time. Â At least this way itâ€™s a more believable absence that allows for him to come back whenever the story and/or Steven McQueenâ€™s schedule allows.

-â€œIt doesnâ€™t matter because life isnâ€™t about your final moments. Â Itâ€™s about the moments that led up to them.â€ -Stefan

On that note, how many tissue boxes are you buying to prepare for Lizâ€™s funeral next week?