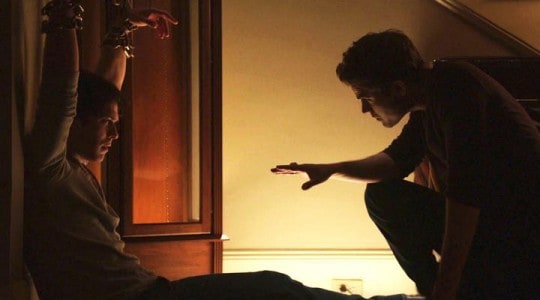 We’re still dealing with the repercussions of the Phoenix stone’s effect on not only Damon but Stefan as well in this fantastic episode of The Vampire Diaries. An old friend came back home for a special occasion, making it an all-around compelling hour of television.

Picking up right where we left off last week, Damon thinks he’s killed all his friends. I have to say, waking up chained in the foyer of the Lockwood mansion is a far better sort of punishment than being stuck in that endless loop of his days in the war. Stefan is there to help his brother, but what he doesn’t realize is that he’s still not over his own experience in the hell world. By the way, I think ‘hell’ is the word of this season following in the lines of ‘cure’, ‘moonstone’ and ‘doppelganger’ from past years.

Hallucinations of Damon haunted Stefan for weeks since he was pulled out of the stone first. He may have thought his PTSD was done but Stefan’s in for a rude awakening when Julian finds him talking to himself in his car after losing track of Damon for real.

The flashbacks to the few weeks when Stefan was the only brother out of the stone were super interesting. We saw how Caroline tried to be there for him but he wouldn’t fully let her in on all his darkest secrets about his time in the hell world. Finally he tells her now about how he felt he had to let Damon drown in order to save himself. He misinterprets the meaning of that symbolism to be that he won’t be his true self as long as his brother’s around. Of course we know Stefan doesn’t actually feel that way and now that he realized his mistake he’s finally free of his Phoenix stone torment.

Damon also freed himself from his torture but he’s got an even heavier burden on his chest because of it. He believes he torched Elena’s body when he was still seeing Henry’s ghost everywhere. I pray that Tyler wasn’t stupid enough to bring Damon to Elena’s real body and that was just an empty coffin in the storage locker. The CGI image of Elena’s face on fire was surprising and cool, although I still think we were only seeing it as her because it was from Damon’s point of view. He’s only going to get worse now that he thinks he’s ruined any future he has with Elena. Someone needs to let him off the hook eventually if he continues on his downward spiral. Or maybe not. Maybe let him grieve and move on without her, only to be surprised just in time for the series finale when they’re finally reunited.

I mentioned Tyler was back and it was nice to see him again. He seems like he’s in a good place in life away from all this drama at home. The reason he was in town was for Caroline and Alaric’s baby shower! Like I said, it feels like Stefan and Caroline are slowly unraveling as the seeds for a new relationship between Caroline and Alaric are only being planted. Let me clarify: there’s nothing romantic between Caroline and Alaric yet but once she found out he’s planning on moving far away after the babies are born, that was a real wake up call. A lightbulb went off in her head, one that I called from a mile away. She’s not walking away from these babies any time soon.

A few more important things to discuss regarding the future: Matt and the Huntress are working together?! We’ve heard about the Huntress because of the casting news, but Nora telling Bonnie about her tonight was the first time she’s been mentioned on the show. At least Bonnie got a warning about the new Big Bad coming to town so she might be able to stay one step ahead of her but not for too long. As we see in the flash forward to 3 years later, Matt is freeing Caroline from her TV studio attack. They’re not on friendly terms though when he reveals he’s working with the Huntress. He’s obviously getting himself mixed up with the wrong crowd somewhere down the line and I only hope he can survive in the end.

What did you think of “Things We Lost in the Fire”?

The Vampire Diaries Season 7 Episode 11 Review: “Things We Lost in the Fire”

Stefan and Damon deal with their PTSD side effects in this solid episode of The Vampire Diaries.