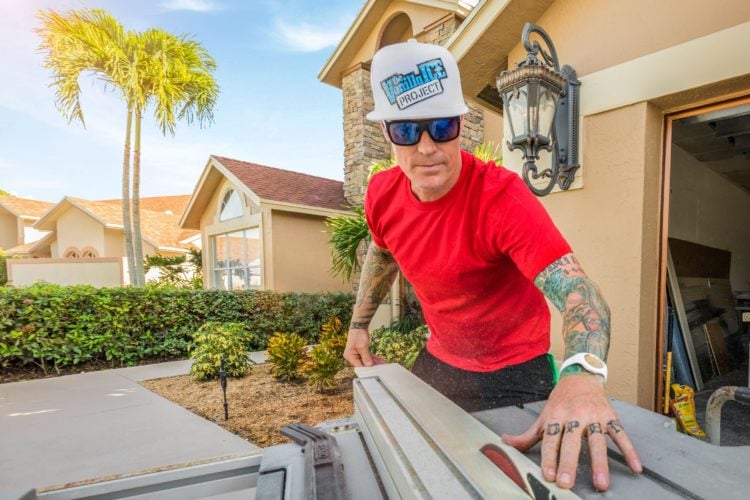 If you love some of the many HGTV and DIY Network reno shows but find that many of them are big on lots of technical stuff and short on entertainment value, then you’ve got to see The Vanilla Ice Project, starring none other than singing sensation (or one-hit wonder to some) Vanilla Ice aka Rob Van Winkle. It’s already in its 9th season and still going strong. So, what’s so entertaining about The Vanilla Ice Project, you might be wondering?

First of all, there’s the Bling. Nowhere but in Palm Beach County, Florida, will you ever find as much bling as Rob puts into his projects. If you’re more into understated elegance or rustic relaxed interiors, you’ll probably find his over-the-top designs a bit gaudy. But, to most people, they’re just plain fun! Where else would you find so many items trimmed in 18k gold?

There are the Funny Sayings

Rob and the boys have some of the funniest (and often insightful) sayings when they’re working on a reno and being filmed doing it. Here are a few:

Then, There’s the Finished Project

When Rob and his motley crew are finished with one of their projects, they’re nothing short of spectacular. They represent the ultimate in not just bling but also comfort and convenience. They usually feature state-of-the-art kitchens, bathrooms that are to-die for and even space-age elevators. Let’s face it, Rob spares no expense, never pinches pennies, and outfits his project homes with everything any homebuyer could ask for.

According to Distractify, the DIY Network’s The Vanilla Ice Project.premiered on Oct. 14, 2010. At the time, there were some people who were sure that it would just be a one-hit wonder like Rob’s music career. But now, It’s 2020 and the show is already in its ninth season and it doesn’t look like Rob’s going anywhere soon, except to the bank. Shooting in Palm Beach County and mainly flipping properties in the surrounding area means not only excellent Floridian weather conditions but also some massive luxurious homes to choose from. Florida offers a climate that is basically a contractor’s dream with the possible exception of the hot and humid summer months.

The great thing about the Vanilla Ice Project is that Rob and his tight-knit crew always manage to end up crushing each and every job that they work on. On top of that, quite a few episodes even feature some kind of a twist. The team also always seems to take on some really unique challenges presented by homes and homeowners. In addition, they always push the envelope when it comes to superior design and functionality. Rob’s know-how and professionalism are due to the fact that he’s actually been performing professionals renos on a multitude of homes for 20 years now. That means that he knows all of the top local contractors that he knows can be relied on to do a great job. And, he doesn’t have any delusions of grandeur when it comes to being able to deal with every single issue that might come up on a job. Instead, he regularly goes to his rolodex for a reliable subcontractor who can help him to assure that they’re always exceeding his clients’ expectations.

Rob’s net worth is set at $18 Million. He’s no longer just in the music business. For years now, he’s been building a respectable (and quite profitable) contracting business. Now, he’s making piles of cash flipping houses. In addition, he launched a training course that teaches newbie house flippers everything about his successful real estate investment methods. According to NetWorthBuzz, the Vanilla Ice massive hit in music was in the 90s. It was entitled ‘Ice Ice Baby’. Unfortunately, that was the singer’s only real hit. That’s why so many people are so surprised to hear that his net worth is upwards of $18 million. So, OK, how did he acquire his fortune?

Born in Dallas, Rob never even knew who his biological father was. So, he took the name of his mother’s current husband at the time of his birth, and he became Robert Matthew Van Winkle. He started breakdancing with friends when he was just in his early teens. Since he was the one and only white member of the group of friends, he was nicknamed Vanilla. Then, when he became a member of a breakdancing troupe he started using the stage name Vanilla Ice. The new name was a combination of his signature dance move named ‘The Ice’ and his nickname.

Then, in the late 80s, Rob started performing as a rapper at City Lights, a dance club in Dallas. He had greatly impressed an audience during an open mic night. and was offered the job. He actually opened for a number of famous acts that were performing at the club, including Paula Abdul. Public Enemy, and MC Hammer. The club’s owner, Tommy Quon, saw a great deal of commercial potential in Vanilla Ice and paid for his recording studio time.

In 1990, when ‘Ice Ice Baby’ climbed the charts to number one, Vanilla Ice became only the second white rap singer to ever top the charts. In addition, it was also the first time in history that any hip-hop record had become number one. What caught everybody’s attention about the song was a catchy riff used in the recording, which was from Queen’s ‘Under Pressure’. Soon, the song was a major hit. Ironically, it was only planned to be a ‘B’ side on another single, however, a radio DJ made a mistake by playing the wrong side. And, as they say, the rest was history.

No official announcement has been made yet by the DIY Network, however The Vanilla Ice Project has been doing pretty well in spite of the fact that Season 9 was only made up of six episodes. If the show is renewed for a tenth season, we can start anticipating a release date in July 2020.

What We Learned from The Future Man Season 3 Trailer

John Krasinski and Steve Carell Have a Mini The Office Reunion

Will Elsa Ever Have a Girlfriend in Frozen Sequels?

Whatever Happened to Adrienne Barbeau?