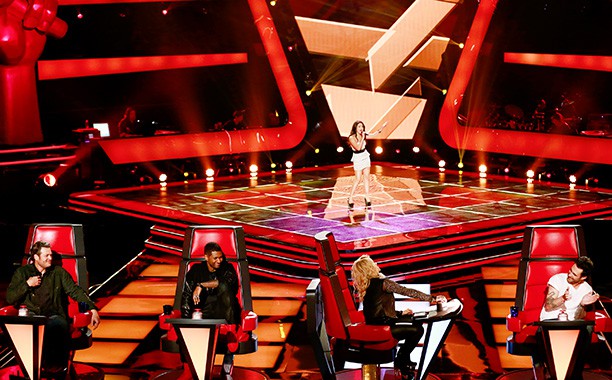 With reality competition shows like The Voice, it seems like the judging panel, or um… coaches, can be as big a factor for the viewers as the competitors. Â If not MORE of a factor. Â Just look at how American Idol has languished with big shake up this season. Â The Voice, on the other hand, replaced two of its most popular judges, Christina Aguilera and Cee Lo Green, with newcomers Shakira and Usher,and came out on top. Â So far, Â The Voice has maintained ratings steadiness since its premiere with the new panel, while American Idol’s caustic combo continues to wither on the vine.

Note: Â Cee Lo and Christina will be back in future seasons of The Voice, they are just taking a break.

The Voice came in #2 for the night on Monday with around 13Million live viewers and a 4.9 rating in the 18-49 year old television viewer demo. Â Big time NCAA action was taking most of the oxygen out of the prime-time space otherwise The Voice would have easily come in number one.

Elsewhere, Voice did little to help Revolution fend off the b-ball action, but NBC’s post apocalyptic fantasy is still holding its own. Â Dancing With the Stars was the other major live viewer winner outside of NCAA coverage bringing in roughly 13M viewers, but landed #8 in demographic rankings.