Home
The Voice
The Voice Recap: First Battles Down, Many More to Go 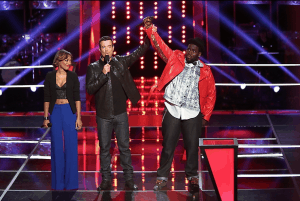 Last night on The Voice, the Battle Rounds kicked off in full force, leaving a number of casualties in its wake.Â  Although there were some sad good byes to contestants who were only just getting started, there was a good amount of happy news for those moving forward in the competition to the later Knockout Round.

Team Blake held two Battles on last night’s episode of The Voice, beginning with country boy Casey Muessigmann going up against Scottish rocker Terry McDermott with a performance of “Carry on Wayward Son.” Â Although Casey started out initially shaky with team advisor, Michael Buble, suggesting he not put such a country spin on the classic song, he pulled it together and gave a strong performance. Unfortunately for Casey, however, Terry gave an even stronger performance, earning him a spot in the next round and Casey a trip home.Â  Â Blake’s second battle of the night was between the blonde haired yodeler Gracia Harrison and the mother daughter duo 2 Steele Girls, and while it initially seemed as though duo had the edge, Gracia’s sassy and entertaining performance of “Sin Wagon” put her over the top, earning her a place in the next round as well.

Team Adam’s only battle of the night was between Bryan Keith, the son of a Grammy winner and Collin McLoughlin, the college dropout turned singer. Both men took on the challenge of Sublime’s “Santeria” very well with Bryan nailing the song and Collin singing with what Adam referred to as “maybe the best pitch he’d ever heard,” however, when it came down to fine tuning, Bryan needed work on the rhythm and Collin needed to add a “little more danger” to his performance. During the performance, Collin came out guns a blazing trying with all his might to add a little edge, while Bryan offered a bit more chill performance that seemed more authentic and true to himself. In the end, Adam selected Bryan as the winner of the Battle Round, leaving Collin to make his way home…until, the moment we’d all been waiting for happened…The Steal! The first of the night, both Blake and CeeLo pushed their buttons to snag Collin over to their teams, and after some rather funny debate, Blake won over the singer, adding one more member to his team.

Also holding double duty for the night’s battles was Team CeeLo who started of the evening with Peruvian singer Diego Val and Youtube sensation JR Aquino. After telling the singers that they would be singing “Jesse’s Girl,” they launched into a run through that concerned both CeeLo and team advisor Rob Thomas as Diego struggled with the melodies and lyrics. JR, on the other hand, was almost too confident, even doing the ever classic hand shake sike out as the two entered the battle arena. Despite Diego’s struggles during practice, he managed to pull through and, while JR might have had a better performance, CeeLo believed that he could do more with Diego. And just like that, JR headed back to Alaska.

CeeLo’s second battle of the night paired powerhouses Amanda Brown and Trevin Hunte singing Mariah Carey’s “Vision of Love.” Amanda was clearly more comfortable with the song, while Trevin struggled with his confidence more that the actual song. When it came to performance time, both singers brought it in a big way, with an amazing duet of the song that left everyone on their feet.Â  CeeLo, who had obviously underestimated Amanda, found himself quite bummed that he had put two of the strongest singers together and after a bit of hesitation, he went with who he had planned on all along, Trevin. Before Carson Daley could even get the words out of his mouth, all three of the remaining judges smacked their buttons for the steal, a move we knew was coming because they’d already declared it. After some quick talking and charming, Adam won over Amanda, earning him a very talented new member to his team.

Also only battling it out once last night was Team Christina who paired Nigerian born Nelly’s Echo with preachers daughter De’borah singing “Message in a Bottle.” In practice, Nelly obviously had the edge since he already knew the song and De’borah admitted that she was not familiar with a lot of popular music. When it came time to battle, Nelly began strong and at first, it seemed that he was going to blow De’borah away, however, she gradually grew stronger throughout the performance and by the end, she had wowed all the judges. Christina declared De’borah the winner, sending her into the next round while Nelly, sadly, was sent home.

Tonight, the Battle Rounds continue on The Voice with several more contestants duking it out to make it into the Knockout Round.