Home
The Voice
The Voice Recap: The Top 8 Give It Their All 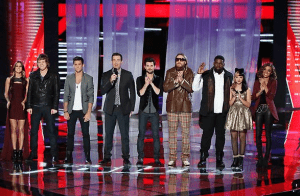 Now that it’s down to the wire on The Voice, it seems that the contestants are very aware of how every choice and every mistake may be the one to make or break it for them on the show. With the pressure on more than ever last night, the remaining contenders took the stage and, although they seemed to be putting their all into it, it just seemed a bit lack luster.

First up was Amanda Brown from Team Adam who bravely took on Adele’s “Someone Like You,” a risky move, the coaches pointed out since the song is currently so heavily played. While it was not my favorite performance by Amanda, it was still strong and according to her coach Adam, she “knocked it out of the park.”

Team Cee Lo’s Cody Belew took the stage next with his version of Queen’s “Somebody to Love” and while he certainly performed with a large amount of personality and pizzazz, the actual singing left a bit to be desired. At some point, no matter how likable Cody is and how entertaining his performances are, it must come down to the vocal abilities and, in the end, I’m not sure he’s got the chops to take the competition.

Changing it up a bit this week was Terry McDermott, who decided to sing “Over,” a song by his coach, Blake Shelton. While he struggled a bit in parts, overall, his performance was strong, prompting Blake to even tell Terry, “You performed that song the way that I always wish I could.” Although it was nice to see a new side of Terry, he seems to be a classic rocker at heart and I hope we get the chance to see him return back to his roots.

Next up to represent Team Adam was Melanie Martinez with Alex Clare’s “Too Close.” At this point, Adam and Melanie seem to have some sort of serious bonding thing going on because he is much more excited about her than the majority of the viewers. Nonetheless, Melanie gave a decent performance, but not as good as last week, even playing the guitar and tambourine with her feet ala her blind audition.

Team Christina’s lone soldier, Dez Duron, performed next and clearly was looking to pander to the tweens and teens who are keeping him alive in the competition with Justin Bieber’s “U Smile.” Christina, as usual, showered him with praise; although I would argue that I’m not sure his performance merited the praise he was given.

Taking the stage next was Trevin Hunte, who returned to his power ballad roots with Whitney Houston’s “Greatest Love of All.” While not his best performance, it was a far cry better than last week, and the coaches seemed over the moon about it, earning him a large amount of praise and even a reference to his singing being like “heaven.”

One of my personal faves, Nicholas David, was up next, singing Marvin Gaye’s “What’s Going On,” all while playing the piano and sporting some seriously dark sunglasses and a pair of braids. You’ve got to love this guy. The judges agreed and Blake thanked him for allowing The Voice to “introduce [him] to the world.”

Last to take the stage last night was Team Blake’s Cassadee Pope, coming straight off the momentum from last week’s very successful performance. For this week’s song choice, she opted for Michelle Branch’s “Are You Happy Now” because she thought it was the type of music she said she could see herself recording some day and if last night was any indication, she may be doing just that very soon. Cassadee gave a great performance impressing the judges and closing out the show on a very strong note.

Tonight, two more contestants will be sent home, taking it down to only 6 remaining contenders fighting to become the season 3 winner of The Voice.