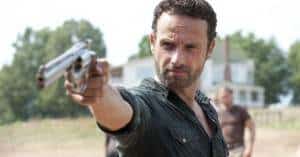 The 3rd season of the hit AMC show, The Walking Dead, will premiere on October 14th and we are in for quite a treat according to reactions from fans all over Twitter. In a word, the trailer for this season is intense.

While we here at TVOvermind weren’t able to get into what we’re sure was one of the hottest panels at Comic-Con (trust us, we tried really hard) we were able to snag time with the stars and producers of the epic zombie show in the press room. Feast your eyes on the trailer below and then scroll down to see 5 things you should know about the upcoming season!

1. The first 5 minutes of the new season are ‘quiet but pretty intense.’While the stars and creators of the show were reluctant to give us, in the press room, too much information, they did tell us that the first 5 minutes are explosive and ‘instantly in the first 4 or 5 seconds you see everyone is in a very different place.”

2. Executive Producer Robert Kirkman went on to tell us the third season ‘is going to be a transition, an escalation of what you’ve seen before.’Steven Yeun, who plays Glenn, joked that ‘It’s clear pepsi.’Gail Anne Hurd told us that ‘intense is a perfect word for what’s going on this season.”

3. The Governor, played by David Morrisey, will be a great antagonist for Rick and the group causing the members of our core cast to come together according to EP Glen Mazarra. Though coming together will be messy and ‘people will have different opinions.’He likened it to being able to talk bad about your own family but getting angry when others do. While the Governor is considered a villain by many readers of the comic books, Hurd goes on to say ‘you don’t meet him and go ‘˜oh, he’s clearly the villain.’He’s someone who’s a fantastic leader.”

4. Another character we will meet this season is Michonne (Danai Gurira) who saved Andrea at the end of last season. Laurie Holden told us that in the third season ‘we’ll explore this wonderful friendship with this new character and it’s great because they’re two alpha females who are very strong and independent. They love and respect one another.’Rather than become intimidated by each other, they are attracted to each other’s strengths. Gurira says Michonne is all about who would you become ‘when you choose not to become a victim in a world this hostile.

5. Rick and the group aren’t as safe as they think they are at the prison they arrived at in the second season finale. Mazarra states that it’s ‘sort of like a haunted house.’In fact, there is a portion of the prison, which he can’t yet tell us about, which he calls his favorite set ever.

Keep checking TVOvermind for more information on The Walking Dead from Comic-Con.

The third season of The Walking Dead premieres October 14th at 9pm on AMC.