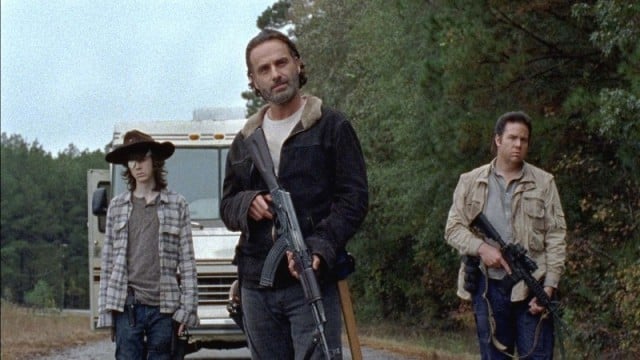 “Last Day on Earth” is an effort of Sutter-ian proportions, a The Walking DeadÂ finaleÂ that literally watches Rick and his group’s internal GPS fail for an hour, trying to drive themselves around the only story the season has left. There are a couple sidebars with Carl locking Enid in a closet, and Carol getting shot up and forcing Morgan to do the one thing he’d never do again – but as it makes very clear, none of that really matters, because Negan is here. Anything this show had tried to cultivate over the course of this season is thrown to the wayside in pursuit of this single plot point: and then, after building to it through the course of sixteen uneven, thoroughly unsatisfying episodes – they do absolutely nothing with it, building towards a moment that resembles the baseball bat scene fromÂ Office Space, only from a first-person perspective.

As I write these words, the internet is probably exploding with “Who did Negan kill?” articles; and why else would this season end like that, if that’s not the goal? There’s no better sign ofÂ The Walking Dead‘s pure desperation to be ‘shocking’ water cooler fodder than this cop out of an ending: forget on how blatantly unsatisfying it is, how brazenly it proclaims its profound misunderstanding of what brave, rewarding storytelling as loudly and openly as it can. It’s really astonishing what a middle finger to the audience that final moment is: it renders the entire season pointless, throwing everything to the way side in pursuit of this iconic scene, and doesn’t even have the nuts to pull the trigger on it, a soul-crushing, visceral death that would really nail home the show’s bleak ideology of humanity. It even sets itself up to do so with its poorly-constructed scenes of Morgan riding around on a horse before killing someone to save Carol: there is no pacifism in this world, even though violence only begets more violence. The New World Negan talks about has existed for years now: the only way to stay alive is to surround yourself with death – and even then, your reward is to watch the people around you die.

Given how this finale plays out – if you can call this cobbled together story of how Rick and company wandered into the perfect location in the woods where a bunch of whistlers were waiting – it’s clearÂ The Walking Dead‘s allegiance to this idea is stronger than ever. Season six has felt like a show at war with itself, the isolated, character-focused episodes struggling to crawl through all the narrative bullsh*t this season has offered, at times trying to be something more than a plot machine that occasionally chews up main characters for the sake of dramatics. Nope: “Last Day on Earth” abandons any sense of depth or sense of existence before the final scene, a continuous, repetitive, snail-paced crescendo that results in Morgan shooting a guy, and Negan smiling a lot (hey, Jeffrey Dean Morgan’s a pretty good actor! The Governor 2.0!) and repeatedly talking around the same point about having to kill someone.

Even the episode’s climatic scene – which ultimately, is just the show pulling the rug out from under the audience – can’t get to the damn point: after a season of episodes that felt like they were stretching three hours of ideas across fifteen, “Last Day” doesn’t even accelerate its pace when building to Glen’s Dumpster Dive 2.0: two-thirds of this episode is spent with Rick and his team trying to maintain the RV’s resale value while crawling away from roadblocks, a series of deteriorating circumstances that undercuts the supposed intelligence of all its characters, just to align them for this showy moment, a climatic scene the show can’t even deliver sufficiently as a climax.

For the next six months, rampant speculation about who died will infect the internet: and isn’t that the only point of this episode? For a show that remains the most popular dramatic series on television (by a long shot), the show’s paranoia of its own popularity is kind of fascinating, and wildly apparent given how this final episode plays out. The introduction of Negan’s brutal, unhinged philosophies may be an intriguing introduction: but whenÂ The Walking DeadÂ takes his power and turns it into a cliffhanger, it only reveals just how badly it wants to remain relevant. In doing so, however,Â The Walking DeadÂ only revealed how truly empty of spectacle it is, a show that doesn’t even respect its viewers – or more importantly, itself – enough to deliver them the powerful, shocking climax they’ve so patiently waited for, forcing its way into the pop culture conversation with silly cliffhanger, instead ofÂ relying on itsÂ tangible creative merits to create a devastating, meaningful, andÂ satisfyingÂ finale. Instead, we get the march to nothingness that is “Last Day on Earth”, as unsatisfying and brazenly manipulative a finale as you’ll watch on television this year.

The Walking Dead ends its sixth season with an empty head-scratcher of a finale.