Home
The Walking Dead Midseason Premiere Review: Can the Show Go On Without Frank Darabont? 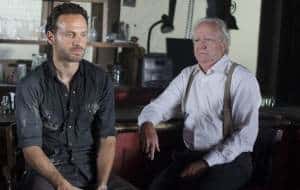 Tonight’s midseason premiere of The Walking Dead, “Nebraska,” is the first post-Darabont episode of the series. The show’s executive producer was fired by AMC in the middle of the second season’s production, and “Nebraska” is the first episode to be written after his departure. New showrunner Glenn Mazzara is in charge now (though the episode was written by Evan Reilly, who wrote this season’s “Cherokee Rose”). But should fans expect a massive change between the last episode, “Pretty Much Dead Already,” and “Nebraska?”

Let’s be honest, here: The Walking DeadÂ isn’t exactly a great show, especially when compared to the rest of AMC’s offerings. The dialogue is often clunky, the storylines protracted and contrived (the zombie in the well, anyone?). The show’s characterization is steadily improving, but too often it relies on a ‘tell, don’t show’ philosophy that isn’t only frustrating, it’s boring to watch. But what the show lacks in subtlety, it makes up in ability to build tension.

Thankfully, “Nebraska” actually feels like an improvement on all those things. The dialogue’s still not great, but it’s not as noticeably bad. There’s one plot point that feels especially contrived (it involves a long time spent staring at a map), but most of the episode seems to naturally evolve from the events of the midseason finale.

And the characterization continues to be improving. Throughout the episode, there are some wonderfully executed little scenes that are obviously designed to add depth to the characters — and they do. A scene between Shane and Carol is surprisingly warm, while Scott Wilson is simply captivating while delivering a monologue in a scene between Hershel and Rick. The episode plays to the show’s strengths, too, with the final third delivering some great tension that will likely have you on the edge of your seat.

It’s probably completely untrue to say that Frank Darabont’s departure led to the show’s improvement, but “Nebraska” is certainly a step up from the plodding nature of the first half of the season. Of course, the question remains as to whether the show will continue to improve. “Nebraska” isn’t a perfect episode, and while it’s one of the best of the season, it doesn’t come anywhere near the show’s full potential. But fans anticipating dire consequences from a Walking DeadÂ without Darabont can breathe a cautious sigh of relief. For now, at least, things are looking up. B-