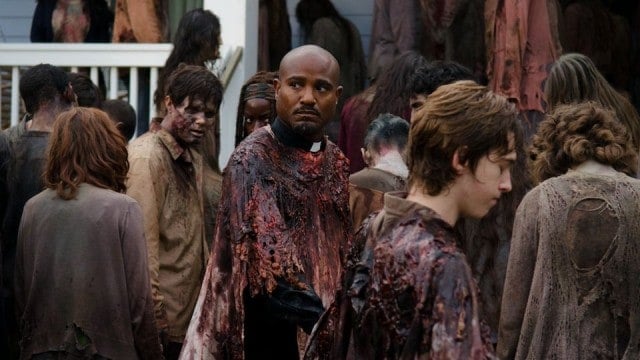 Change is a finicky concept for The Walking Dead, in that it’s always happening on some level, be it characters, setting, or tone. And yet, the old adage about the more things change rings true: for every fresh idea and character it introduces, it has two bad habits it just can’t seem to kick. In that sense, “No Way Out” is the most Walking Dead-est episode of the series yet, having its zombie meat cake and eating it too with a mostly enjoyable – if thoroughly predictable –  season premiere, full of all the anxiety-inducing and eye-rolling moments that entails. It may not stand in the (small) pantheon of great The Walking Dead episodes, but this is most certainly a ‘signature’ episode of the series.

First of all, good riddance to Sam and the rest of his family, the largest waste of time of the past thirteen or so episodes of the series. The end of the first Alexandria mark thankfully marks the end of that family, a trio of horribly archetypal characters designed purely to serve specific plot purposes: so Rick could “release” some stress, so Carl could have a lame not-a-love triangle, and then Sam die, so he could get everyone killed and Carl shot in the face (“.. Dad?”). We all saw Rick give Ron a gun; I’d assume even Rick knew the odds of that being pointed at him were fantastic, at worst. So it’s no surprise when he “accidentally” shoots Rick, and Jessie pathetically stands and dies while grasping Carl’s hand; there’s really no point in getting into the idiocy of these characters, because The Walking Dead already spent so much time depicting it.

Turns out Rick’s “emotions” for Jessie were not something the show wanted to explore at any length, diving right back into paralleling comic book story lines. But that’s ok, because Jessie’s character was never anything but a blonde carrot for TWD to dangle in front of its protagonist, and her death literally holds no meaning: it’s just a disturbing image to clean up some extra cast members with, filling space and giving TWD a reason to shoot Carl in the face, the de facto ‘inspirational’ moment for Rick and the Alexandrians in “No Way Out”.

Without that horribly trite scene, we wouldn’t have the best moment of the episode, when everyone in town sees Rick taking a stand (or having a temper tantrum; your choice), they join him and begin pushing back against the herd. But yet, this tension is undercut by the extreme lack of danger it feels like characters are in; it’s never a good sign when the show is lurching towards certain death for a character, only to turn sideways and be revealed as nothing but a melodramatic moment (Glen’s not death in this episode is a prime example; they really gotta wait until the zombies are aaaalmost touching him before two assault rifles take care of half the zombie herde).

The first half of “No Way Out” effectively builds to the moment Alexandria jumps to Rick’s defense; it’s equally ineffective in how it pads out the episode past that point, however. There is some good material in there, of course: Carol telling people she wanted to kill them is always great (sorry, Morgan), and seeing Eugene and the wimpy Alexandrians finally step up and fight for their lives was enjoyable, if not long overdue. But then Daryl shows up with his rocket launcher again (Daryl, the silent assassin who kills someone, loads a rocket, and fires it 15 feet from the group with nobody noticing), setting the town on fire – because apparently, zombies just walk straight into fire (begging the question: why not just burn a fire every time they go somewhere)?

Getting to that moment is a bit frustrating, too: with so many moving parts and characters strewn about Alexandria, the logic of where they’re positioned at all times is just impossible to maintain. It’s just stuff happening everywhere – which adds to the chaos of the moment, but makes everyone’s movements hard to track. Understandably, the episode’s camera and editing are much more focused on the individual ‘changes’ going through each person (as Denise so openly states a half-dozen times); close-ups of violent ax swings are the norm in the episode’s back half, as everything devolves into utter nonsense, as Daryl’s firing off rockets, burning down the town, and saving the day again – which is all well and good, except that all it took to save everyone (not just from Alexandria, but the entire series) was a freakin’ match.

The Walking Dead is all about taking the good with the bad, though: and as wildly convenient as the end of “No Way Out” may be (oh look – only four thoroughly expendable characters are dead), it’s still got plenty of tense moments engineered around the idea of blind, careless bravery, and how important (and thoroughly reckless) it can be to maintain your sense of humanity. With that undercurrent offering a bit of depth and weight to the many frivolous stories The Walking Dead‘s spent six season telling, “No Way Out” certainly ramps up the sense of tension and movement in an important way: however, it’s adherence to old habits and frustrating, nonsensical turns of story and character remain a blockade to any kind of emotional reaction or connection this hour is trying to foster.

The Walking Dead returns with Rick and the Alexandrians fighting for their home, in an hour equally intriguing and frustrating.