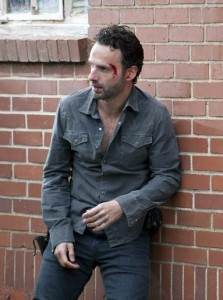 The Walking Dead season 2 shambles out its latest entry with its tenth episode “18 Miles Out,” but how does it hold up to the comic book continuity? The tensions rise as Rick and Shane conflict over what to do with their captive survivor Randall (Michael Zegen), while Lori and Andrea deal with a difficult choice for Hershel’s youngest daughter Beth. So what’s next for The Walking Dead?

As AMC’s incarnation weaves in and out of storylines from the books and adds its own original characters . and its own developments, we’ve compiled an in-depth guide for fans of the comic as well as AMC’s The Walking Dead to enjoy. Check it out, and let us know your opinions of The Walking Dead‘s “18 Miles Out” in the comments below! 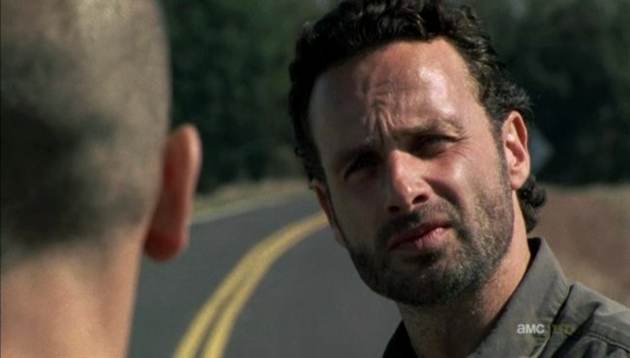 RICK FIGURED IT ALL OUT

THE COMICS: The comic Rick never got around to discussing Shane and Lori’s affair with him flat out, and never truly talked it over with Lori either. Rick did allude to having figured out what happened, but could never bring himself to hear it out loud, even when confronted by his own wife. 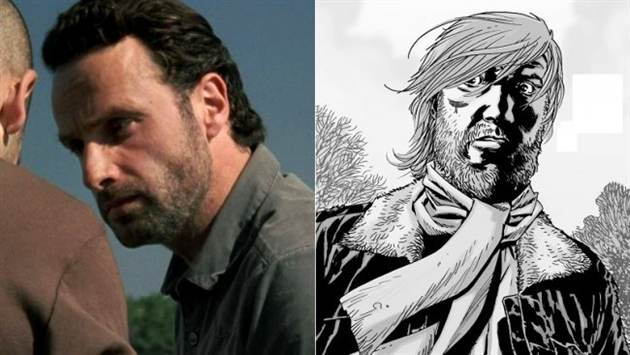 HE COULD ALSO USE A HAIRCUT

This isn’t a nitpick, really, just a minor bit of fun! Andrew Lincoln’s mane as Rick Grimes looks to be getting pretty shaggy, as barbers are hard to come by in the zombie apocalypse. Might he start taking after his comic book counterpart, who more or less let his hair grow wildly all the way up until the Alexandria Safe Zone?

Granted, Lincoln’s curly hair might not look so good at that length. 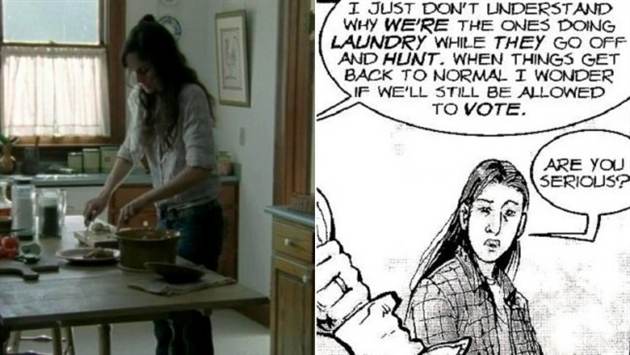 AMC: Talking with both Maggie and Andrea, Lori remains of the opinion that the women among the survivors should be content with homemaking duties like food preparation and cleaning, leaving all the dangerous and difficult work to the men.

THE COMICS: The comic Lori was of a similar opinion, preferring to handle duties like laundry over gun training or hunting. She even defended the idea to a point when Donna took issue with the apparent sexism toward responsibilities. 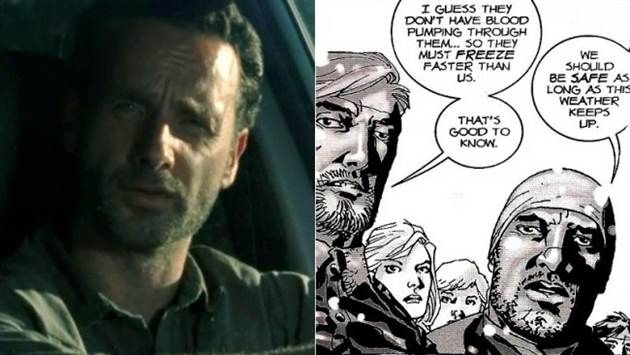 AMC: With Shane lost in his own thoughts, Rick makes mention of the fact that winter will soon descend on the survivors, as the last year brought a thick blanket of snow on Atlanta. He also ponders what effect the cold might have on the walking dead, being nothing more than animated corpses.

THE COMICS: The setting of the AMC Walking Dead was marked difference from the comics, in which the zombie apocalypse broke out sometime during the fall months, and became increasingly colder during Rick’s stay at the campsite. By the time the survivors set out on the road, snow had already blanketed the region, effectively slowing down the zombies. The following spring would see the walkers thaw, bringing increased attacks with them especially on the farm. 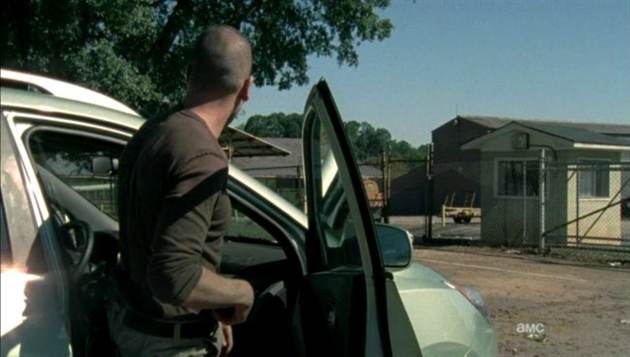 AMC: Rick makes the decision to drop the captive Randall off at the “Mert County Department of Public Works,” which despite an unseen walker infestation seems to be a well-fortified location, with fences, vehicles and a number of (now-undead) guards.

THE COMICS: This location never appeared in any of the books, but we can’t help but notice a few features in common with the infamous prison the survivors would eventually come to occupy! The very presence of such extensive fences and what appear to be multiple guards certainly at least hearken to it. 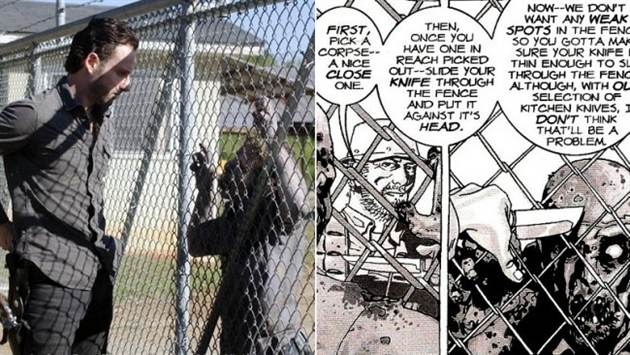 AMC: Trying to reign in Shane and take a new approach to killing walkers, Rick demonstrates a new idea wherein he uses some of his own blood to lure a zombie close to the chain-link fence, and quietly stab it through the brain rather than take any unnecessary shots. Later, Shane tries the same strategy through the school bus’ door, but loses his knife when the second walker’s skull accidentally pulls it out with her.

THE COMICS: Dale was the first to postulate thinning out the herds of walkers surrounding their prison by stabbing them in the brain through the chain-link fences, but the idea was somewhat flawed. He’d line up the knife and use a hammer to insert it, but the walker would often pull the knife with it through the fence as it fell. Glenn solved the problem by attaching a board that prevented the knife from slipping through the fence. 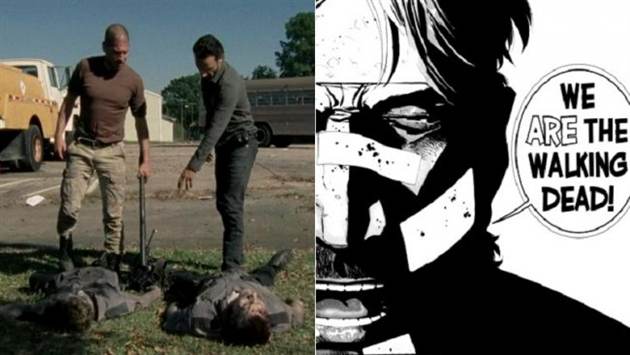 JUST WHAT KILLED THOSE GUARDS?

AMC: Rick and Shane stop to examine a pair of zombified guards who don’t seem to have any bite wounds, and they theorize that scratches may have been enough to infect and kill the men. Either way, something seems amiss about the situation, and Rick appears to know more than he lets on. Might a certain season 1 whisper have something to do with it?

THE COMICS: Perhaps the AMC series is building toward this point, but in the comics it was eventually discovered that death of any kind would resurrect people as zombies, regardless of bites or infection. “The Walking Dead” actually refers to the survivors themselves, who are already infected with whatever disease leads the dead to rise. 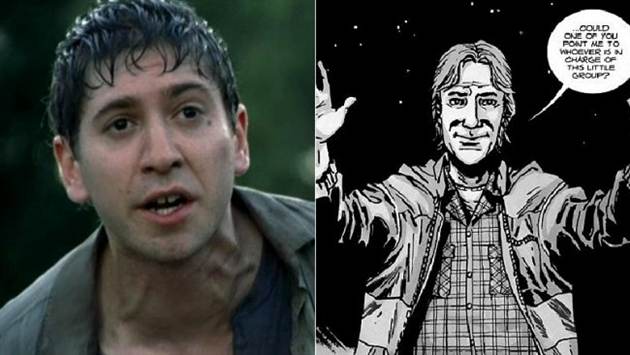 AMC: In his pleading with Rick and Shane not to leave him, Randall (Michael Zegen) accidentally lets slip that he went to high school with Maggie, revealing that he knew all along he’d been taken to Hershel’s farm, and presumably who else dwells there. Might that mean Randall’s group has secretly been spying on Hershel’s farm, with intent to take it for a certain recently-cast season 3 role?

THE COMICS: Though no Randall exists in the comics, Rick’s group has been spied on from a distance a number of times, by friend and foe alike. Aaron spied on the group to gauge their ability to fit in at the Alexandria Safe Zone, Woodbury soldiers eventually observed the prison, and the Hunters stalked their prey. 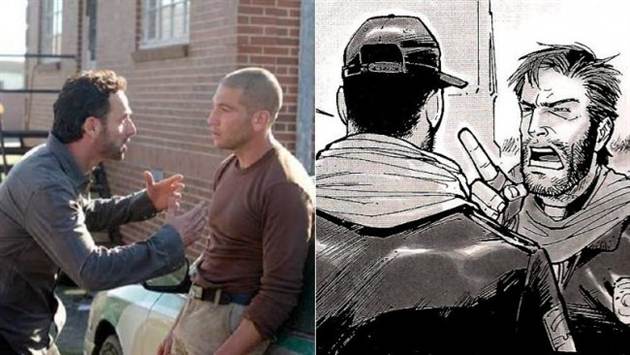 RICK AND SHANE COME TO BLOWS

AMC: After Rick refuses to kill Randall on the grounds that he knows of the farm, Shane reasserts his belief that Rick will fail to protect Lori or Carl, and the two get into an all-out brawl that ends with Shane tossing a wrench with intent to kill!

THE COMICS: Shane and Rick never came to any actual fisticuffs during their brief time being reunited, as their confrontation ended with Shane pointing a gun at his friend while breaking down. 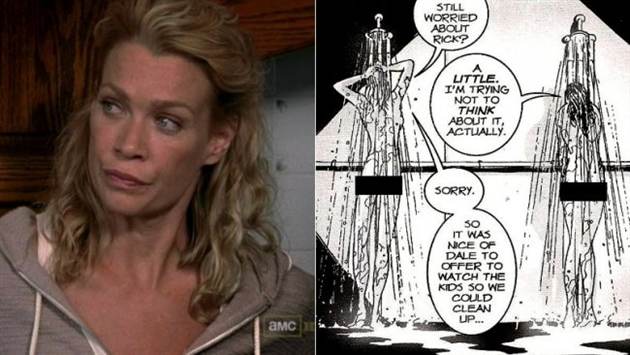 AMC: After Lori realizes her plan and retrieves the kitchen knife from Beth, Andrea criticizes her taking away Beth’s right to choose and the two end up in a bitter argument over their respective attitudes about life in the zombie apocalypse, in light of the fact that Lori hasn’t lost people the way others have.

THE COMICS: AMC has clearly been positioning Shane and Andrea to have similar outlooks, a sort of negative reflection of Rick and Lori. That said, Andrea and Lori never had any arguments in the books, and as you can plainly see, were more than comfortable around one another. Lori did occasionally tease Andrea for weaseling out of the laundry, though. 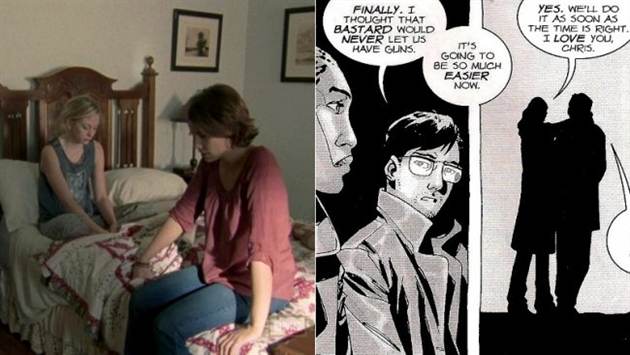 AMC: While Maggie is mortified that her sister wants to end her life rather than face the post-apocalyptic world, Beth proposes that her sister join her and the two end their lives together, if only for effectiveness’ sake.

THE COMICS: Boy, those Greene children have a short lifespan, don’t they? Beth has no counterpart in Robert Kirkman’s The Walking Dead, but her desire to end her life with her sister does resemble the pact between Tyreese’ daughter Julie and her boyfriend Chris, who (attempted to) take their own lives in the prison. Interestingly, the comic book Maggie did eventually attempt suicide herself. 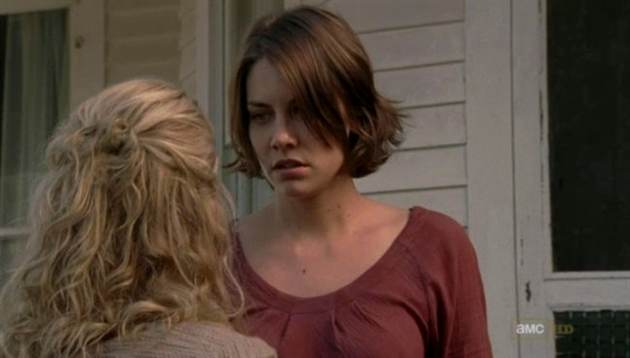 AMC: Girl just rubbin’ everyone the wrong way! After Andrea leaves Beth alone to attempt suicide and discover her will to live all along, Maggie angrily scolds Andrea for the effort and demands the blonde stay away from her family and out of the house altogether

THE COMICS: Like Lori, Maggie and Andrea never had any real cause for quarrel in the books, but it is worth noting that Andrea did get into an argument with Allen on the farm over coping with loss. The comic Andrea told Allen how he needed to stay strong for his children given their mother’s death, expounding on her own coping with Amy’s death as a reference. 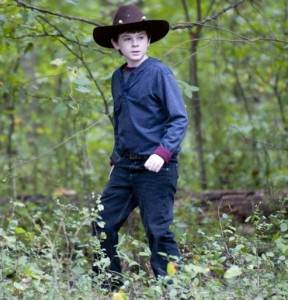 What did you think of The Walking Dead season 2 episode 10, “18 Miles Out?” Did we miss anything else from the comics you might have caught?

Let us know in the comments, and be sure to check back next week for our in-depth comic-to-TV comparison of episode 11, “Judge, Jury, Executioner,” the second half of The Walking Dead season 2, and other coverage of this and your other favorite shows!

Want even more Walking Dead? Be sure to check out our in-depth-comparisons of the first nine episodes right here!