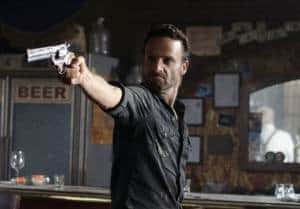 The Walking Dead season 2 finally shambles out its mid-season premiere with its eighth episode “Nebraska,” but how does it hold up to the comic book continuity? The tensions rise as the survivors struggle to deal with the aftermath of opening Hershel’s barn, Hershel takes solace in and old habit, and the group encounters new survivors of questionable intent. So what’s next for The Walking Dead?

As AMC’s incarnation weaves in and out of storylines from the books and adds its own original characters . and its own developments, we’ve compiled an in-depth guide for fans of the comic as well as AMC’s The Walking Dead to enjoy. Check it out, and let us know your opinions of The Walking Dead‘s “Nebraska” in the comments below! 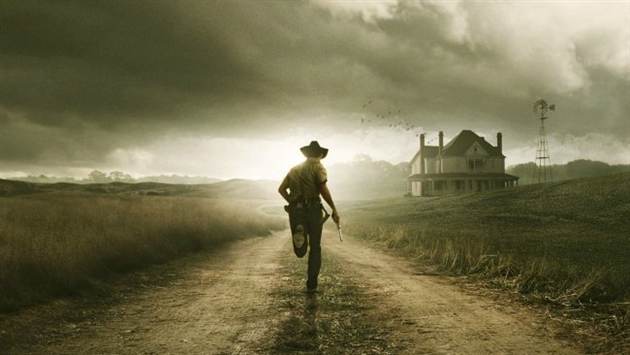 FIRST OFF, WELCOME BACK!

Boy, it’s been since December that we had any fresh Walking Dead to satiate our bloodlust, and we’ve missed it. With all that search for Sophia nonsense fallen to the wayside in the aftermath of “Pretty Much Dead Already,” it’s time for some new zombie-killing adventures on and off the farm!

And if you need a refresher course, check out our first seven Comic-TV Comparisons of The Walking Dead season 2! 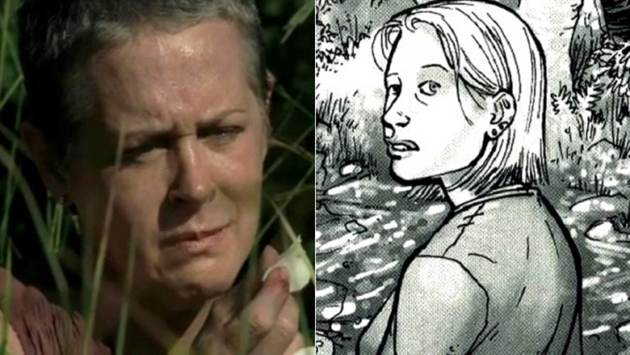 AMC: Understandably devastated by the reveal of her daughter Sophia’s death, Carol seems to crack a bit mentally, refusing to attend the service for burying her daughter and later lashing out in a fit of rage at the Cherokee Roses Daryl had earlier pointed out as a sign of Sophia’s good health.

THE COMICS: We never learned much about Carol before the walking dead started cropping up everywhere, but we know that she wasn’t on the best terms with her husband. Still, even with her daughter alive and well, comic Carol showed plenty of signs of stress after she caught her apocalyptic lover Tyreese cheating, going as far as to propose a three-way marriage to Rick and Lori. Seemingly rejected at every turn, Carol’s stress got the better of her as she eventually, ahem, “opted out.” Could AMC’s version be headed toward a similar fate? 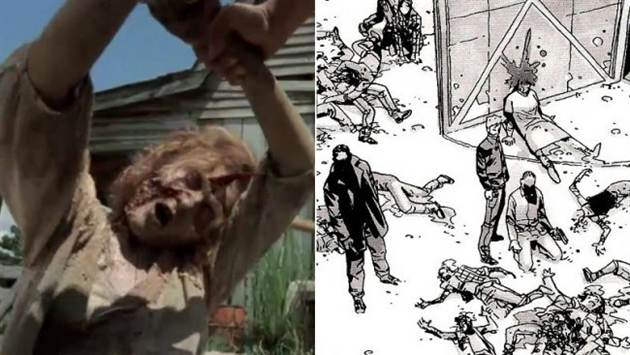 AMC: As the dust settles on what The Walking Dead crew have come to refer to as “Barnageddon,” young Beth finds herself overcome with grief and rushes over to her zombified mother Maggie’s side, only to find that the survivors didn’t quite hit the brain! Maggie snarls back to un-life and nearly overtakes Beth before Andrea manages to swing a scythe through the woman’s head. What do you think, zombie kill of the week?

THE COMICS: In the Comics Hershel’s wife had died some years before, but we won’t belabor that point. Instead, we’ll draw comparison to the fact that once the comic survivors had put down the walkers in the barn, they stayed down, as far as we know anyway. No last-second horror movie scares for the black and white! 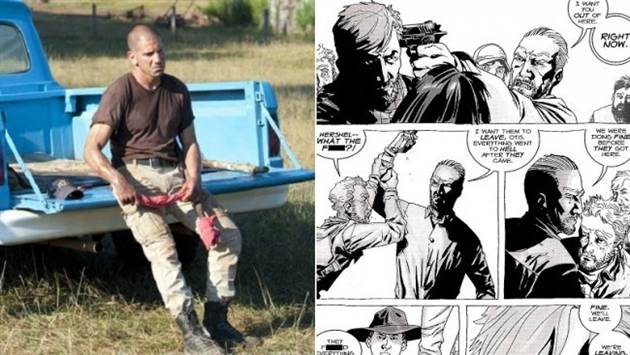 HERSHEL THROWING FOLK OFF HIS LAND

AMC: Obviously distraught by the incident in the barn and the man’s wild behavior, Hershel commands Shane off his land, but time will tell if the stalwart Shane has any respect for the farmer’s wishes.

THE COMICS: In the books Rick was the one Hershel most directly wanted off the farm, his gun making matters much more threatening, but his command was based less on what happened at the barn and more on his lost children, and Rick and Lori’s presumptions that they could stay on the farm permanently. 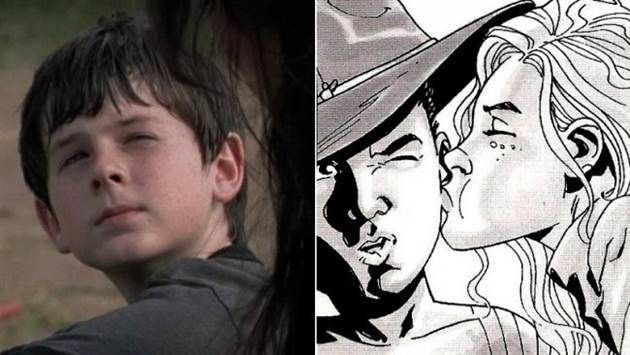 AMC: Lori feels that Carl might be losing his humanity when he makes mention of the fact that his father was right to shoot Sophia for being a walker, and that he’d have done it himself if necessary.

THE COMICS: Comic Lori had her worries about Carl growing up in this world as well, but she never saw anything as traumatic as Carl losing Sophia, who acted as a girlfriend of sorts to the only other survivor her age. Of course, Carl had to make plenty of tough decisions later in the story, even with his friendship to Sophia in tact. 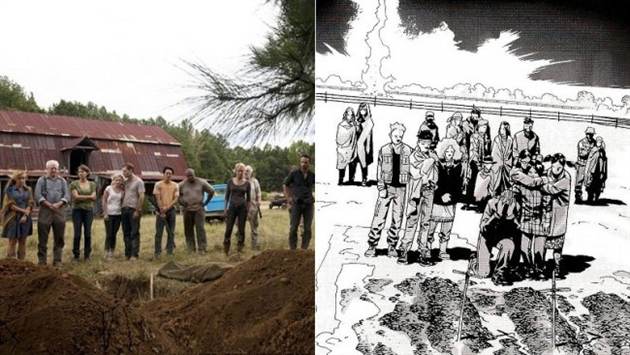 AMC: Though Carol ultimately decides not to attend, the survivors hold a service for Sophia and Hershel’s deceased family, making sure to burn the remaining bodies of the walkers, fallen-arms and all.

THE COMICS: Pretty spot-on! Although the comic survivors seem to have been less quick to start their service, given they staged the burial as the walkers burned in the background, rather than separate the two as on AMC. 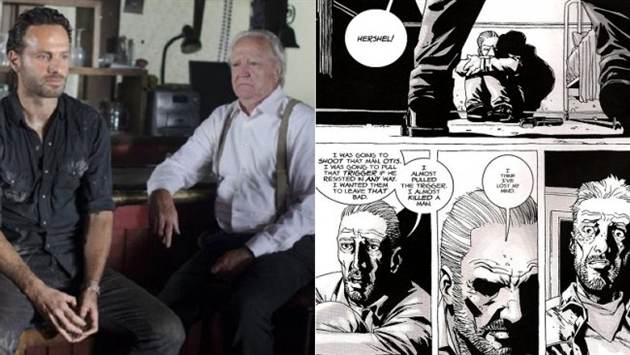 AMC: When his beliefs fail and he watches half of his zombified family gunned down by the survivors at the barn, Hershel picks out an old flask from his drawer, and when that runs dry heads into town to rekindle his alcoholism at the local bar.

THE COMICS: Hershel was never known to have any kind of drinking problem in the books, but certainly had somewhat of a breakdown after the barn. Not only did he break down at the scene and funeral, but later questioned his own stability upon nearly killing Rick in anger. 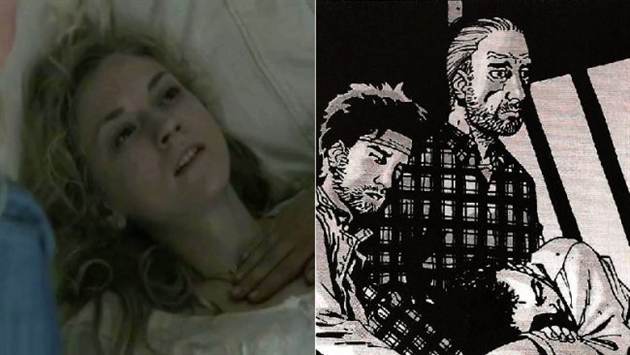 AMC: Unexpectedly, Beth Greene falls into some kind of shock following the incident at the barn, and her father’s disappearance. She remains in a catatonic state with her heart racing, and her father nowhere near to help

THE COMICS: The Green family seems to have a history of going catatonic, or a history of tragedy depending on how you look at things. During their time in the prison, a tragedy nearly rendered their entire family into a lifeless daze, and rightly so! 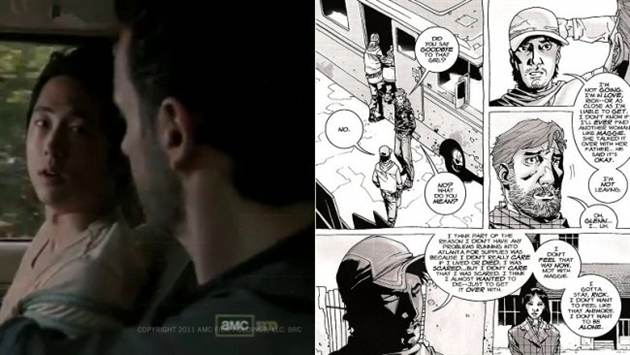 AMC: Riding into town with Rick to retrieve Hershel, Glenn confesses that Maggie claims to love him, but he doesn’t believe in its value given how little she’s known him. In an earlier conversation with Maggie he also expressed doubt about staying on the farm, though Rick insists that Maggie knows how she feels and Glenn should enjoy it while he can.

THE COMICS: Their conversation in “Nebraska” touches on a similar comic interaction, though in that case Glenn would tell Rick that he plans to remain behind with Maggie, never once having doubted the love they shared on either side. 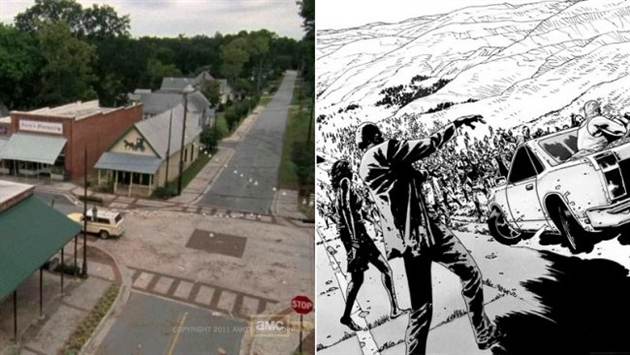 This is just a simple nitpick, but…shouldn’t there be, you know, zombies? In the zombie apocalypse? Rurally spaced, sure, but you’d think an entire town might have a walker or two shambling about the streets, even in the distance

Of course, the one active walker we see in the entirety of “Nebraska” happens to be crossing the road when…hey, speaking of which… 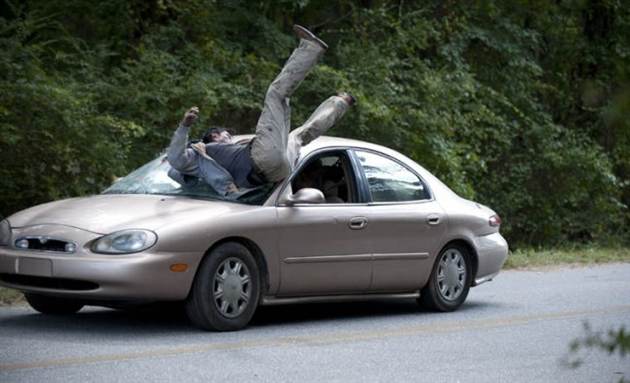 AMC: Rather than wait for Rick and Glenn to return with Hershel, Lori tries and fails to enlist Daryl to go after them, ultimately deciding to pack a gun and drive into town herself. However, she gets a short way off the farm before a stray walker surprises her on the road, and she flips by the side of the road. Ugh, Lori is the worst.

THE COMICS: Why would anyone do this? Thankfully, Comic Lori knew a little bit better than to traipse off in search of Rick (who wasn’t even gone that long), and could avoid running off the road in the face of a solitary walker. 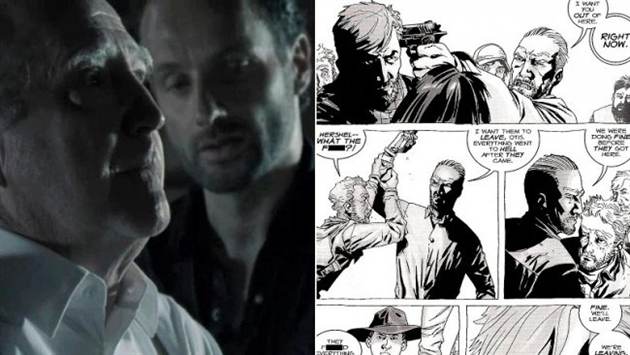 AMC: Despite the fact that Shane was the one to open the barn and eliminate a good chunk of the walkers, Hershel still blames Rick for the events of the past few weeks and the loss of Otis, adding that Rick’s been “like a plague” upon the Greene farm.

THE COMICS: Though he arrives at the conclusion in a different manner, and even admitted what happened at the barn was right, comic Hershel indeed believed Rick and his group responsible for all the damage to Hershel’s way of life. 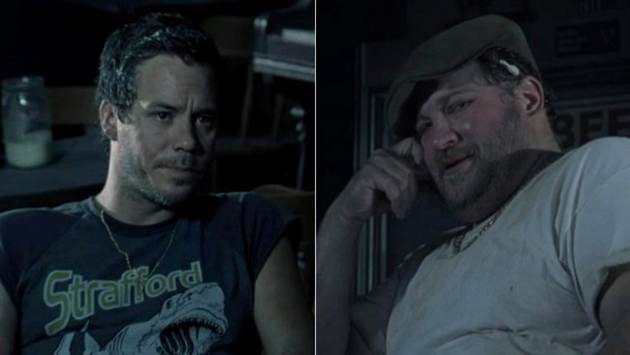 AMC: Interrupted in their conversation at the bar, Rick, Hershel and Glenn make some new friends in the form of fellow survivors Dave (Michael Raymond-James) and Tony (Aaron Munoz), who make themselves at home with some friendly banter, before quickly trying to gather the farm’s location out of the trio. When things turn hostile…let’s just say we won’t be seeing these fellows again.

THE COMICS: Neither Dave nor Tony share any real comic counterparts (even if a few names here and there might match), but their attitudes intent on taking by force any living situations better than their own certainly matches the attitude encountered by the survivors over the years. They never had to defend Hershel’s farm from inquiry, but their next location would be desired by all… 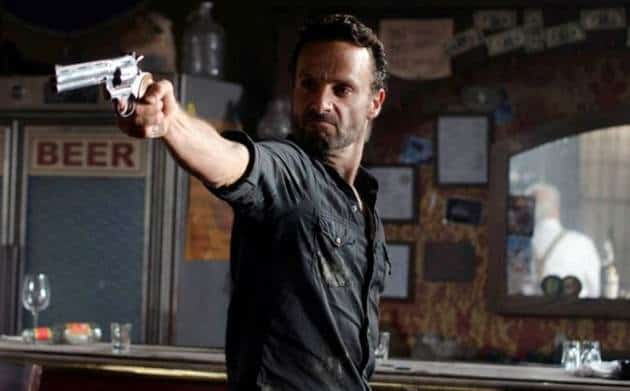 YOU KILL, YOU DIE

AMC: Boy, that Rick sure seems to be moving up in terms of making the hard choices as a leader! Without a second thought, he denies Dave and Tony access to the farm, and coldly guns both of them down the second Dave reaches for his gun. In the moment, Hershel doesn’t even seem to object.

THE COMICS: Comic book Rick Grimes certainly didn’t hesitate to pull the trigger on people threatening him or his family, but it took him far longer to get to that calloused point. In fact, initially Rick believed in a code of “You Kill, You Die,” which meant that any survivor who attempted to harm the living would have their life forfeit. Perhaps we’ll even hear those immortal words before the season is out. 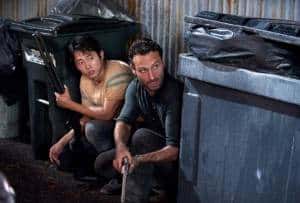 What did you think of The Walking Dead season 2 episode 8, “Nebraska?” Did we miss anything else from the comics you might have caught?

Let us know in the comments, and be sure to check back for our in-depth comic-to-TV comparison of episode 9, “Triggerfinger,” the second half of The Walking Dead season 2, and other coverage of this and your other favorite shows!

Want even more Walking Dead? Be sure to check out our in-depth-comparisons of the first six episodes right here!