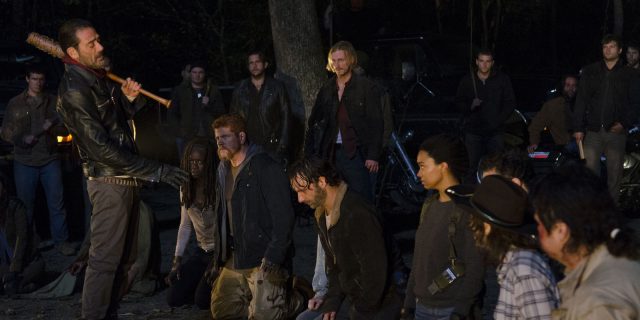 The Walking Dead‘s never been a show about hope, happiness, love, or even the promise of any of those things. Thrilled to wallow in the darkest waters of humanity’s remains,Â The Walking Dead‘s spent six seasons reiterating the fact that when civilization falls apart, there’s no chance for anyone to survive intact: one may survive in the physical sense, but anything remotely human is slowly stripped away by the never ending onslaught of violence and betrayalÂ TWD has utilized to catapult its way to the top of the television landscape. It brought new definition to the word ‘bleak’, relentlessly pushing its characters into smaller and smaller corners of their own sanity as it found new and darker pockets of humanity to explore and destroy.

All in all, it took 84 hours worth of death, loss, grief, sadness, insanity, and bloodshed to get to the events ofÂ “The Day Will Come When You Won’t Be”,Â which basically boils downÂ The Walking DeadÂ to its purest, most concentrated form of itself: the entire hour is spent reveling in utter misery, vacillating between frothing excitement for the violence it wants to show the audience, and trying to engineer tension around the next person it planned to commit a violent act against.

And thus, the ultimateÂ The Walking DeadÂ episode is revealed: in many ways, some might consider this the best, most powerful hour this show has done. Never before hasÂ The Walking DeadÂ been focused on a singular idea with such force: not during The Farm, or The Prison, or Woodbury, or Alexandria, or The Half-Season on the Road… not a single episode before “The Day Will Come” is as driven or focused as this season seven premiere. Every single line, shot, and idea is constructed around being the darkest, most dramatic version of itself it can be, stretched across a single night that plays out in 46 minutes running time. It’s the perfect thesis ofÂ The Walking Dead, in that it doesn’t give an F about its characters, its audience, or anything except being the bloodiest, most sickening version of itself it can be.

Like no other television show I’ve seen before,Â The Walking DeadÂ is seemingly aroused by testing how grotesque it can be: and as one might expect, that culminates in a one-man d*ck measuring contest, endlessly blathering on about his dominance of the world between random moments of him bashing in the skulls of Abraham and Glenn, the two most humanized, empathetic characters this showÂ everÂ offered the audience, further titillating itself on just how dark it can be, killing off two hugely popular characters in a way that feels like it’s daring the audience to continue watching. “We’re too popular for you to walk away now!” may not have the same ring to it as Negan slooooowly singing Eenie Meenie, but the effect is the same: we can do whatever we want to whatever character we want, and there’s nothing you’ll do about it except keep watching!

I mean, they’ve proven this formula time and time again in the past, a series of repeating stories that hasn’t felt fresh and new since the *first* Governor arc; with each revolving arc,Â The Walking Dead‘s fetishization of misery and emotional manipulation have grown more and more audacious. Look no farther than the 48 consecutive shots of Negan pointing Lucille in someone’s face, or the “dream” ending where everyone is alive and has dinner together, Alexandria-style…. or the six months and twenty minutes they spent resolving a cliffhanger…. or just how overtly constructed this whole episode feels, from how Negan teases Rick for the ENTIRE episode (ignoring everyone else, minus the two people he murders) to how obvious it was which people would die, given the clear delineation between “untouchables” (Rick, Carl, Daryl, Michonne) to the “minors” (Aaron and co. – aka the people we don’t know enough for their deaths to feel “huge”), leaving only the characters who die as the logical choices for who to kill (they weren’t going to kill a pregnant woman on TV in this fashion, which literally only left Glenn and Abraham). There’s nothing about this hour that feels particularly creative, or likeÂ The Walking DeadÂ has learned or grown in its time off – and by the time it slogs through its ridiculously vapid, manipulative non-ending, it has finally revealed just how empty it is at its core.

The Walking DeadÂ certainly had its inspired creative moments – few and far between they were, but there are plenty of episodes and moments of the show that are memorable, even when surrounded by the typical nonsense the show features around said moments. But with this season premiere,Â The Walking Dead has proven those days are long, long behind us: all that’s left is the dramatic blood splatters and slow drips of sweat, the never-ending cycle of violence, brief moment of hope, character death, more despair encapsulated perfectly by the 46 minute-turd that is “The Day Will Come When You Won’t Be” (six months to think of a title name, and that’s all you come up with?).Â The Walking DeadÂ may remain the most popular show on television for years to come, but the show’s callous rejection and manipulation of its own audience, not to mention just how poorly conceived and executed this hour was (on every level except technical; as always,Â The Walking Dead‘s imagery and special effectsÂ are top-notch), are the ultimate reveal of the dramatic ruse this show’s executed (no pun intended) for years, an hour as monumentally disappointing and lifeless as it is joylessÂ and exploitative. In a way, I admire the still-dedicated longtime fans of the series, sticking with it after the premiere: but after this laughable, thoroughly unentertaining mess of a premiere, I have fallen offÂ The Walking DeadÂ bandwagon for good.

The Walking Dead Season 7 Episode 1 Review: "The Day Will Come When You Won't Be"

The Walking Dead lowers the bar even further with a heartless, hollow season seven premiere.