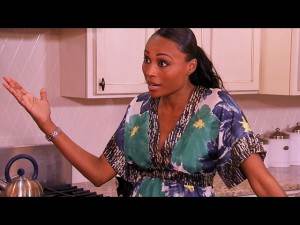 An episode of The Real Housewives of Atlanta without a screaming match is a sight to behold, y’all. There’s always somebody mad at somebody and a lunch/brunch/party to make a scene at, but last night’s episode was a markedly sedate affair that actually showed these ladies as flesh and blood people.

NeNe’s divorce has been playing quietly in the background for some time, but I liked getting a clearer picture of where she’s at right now regarding it. You had to feel for the poor woman because her pain and confusion over her status with Gregg read all in her talking heads and her body language; too often, NeNe fails to show any vulnerability, instead relying on her sharp tongue and physicality, but here, you got to see the person behind the NeNe facade. And you know what? I like that person, much more than the flaunt-it-if-you-got-it snotty label queen that had taken over her body this season, and I hope we see more of her. I miss loving NeNe and while I don’t wish the pain of divorce and an uncertain future on anybody, it’s made her more human and given depth to some of her less attractive moments this season.

Speaking of unattractive moments, Cynthia is a mess. Does she live in a vacuum? Because I don’t think she pays attention to anything not in her head or spoken with a Jamaican accent, as there is no self-awareness to the former model. How can she not understand why Mal’s not a big Peter fan? I mean, her sister has damn near made a powerpoint presentation of why their marriage is incredibly toxic, so Cynthia either doesn’t listen or doesn’t think regarding this whole (stupid) issue. I wouldn’t be so hard on Cynthia if she doled out the hurtful words equally; having her read Mal without acknowledging Peter doing anything wrong, at any time, is ludicrous. Did she not attend the anniversary party and hear him make rude comments about Mal? Mal didn’t fly off the handle for no good reason at the party and Cynthia failing to tell Peter to tone it down around her sister felt like that episode of The Twilight Zone with the pig people.

If Cynthia thinks the sun shines out of Peter’s behind, she better not complain about him from here on out, though. Just sayin’.

Phaedra’s birthday party for Ayden, though, was everything wonderfully ridiculous about our favorite southern belle wrapped into one 2 hour excursion to the water park. Granted, if I were Sheree and had to go that far for a 1 year old’s birthday, I might be a little annoyed, but it had the delusional decadence that spawned the greatest baby shower of all time last season. The 12 cakes, the rented Greyhound bus, the fact that Dwight (!!!) was raised from the dead to come – it brought just the right amount of over-the-top silliness to a pretty straight-laced episode. The only thing I didn’t care for was the constant mentions of Ayden being a prince, royalty, etc. Phaedra may be playing up the whole thing for the cameras, but there’s giving your child confidence in themselves and there’s turning them into an arrogant monster. Ayden’s young enough where their words haven’t sunk in quite yet, but they will soon and if not curtailed, Phaedra may be responsible for creating a brat.

Though I had to roll my eyes at Phaedra, Marlo’s 2 seconds of screen time got under my skin. How dare you tell Lawrence you won’t call him gay but you’ll only call people you don’t like (insert expletive). Like…what? It’s obvious that she still doesn’t get why what she said was wrong and her comments tonight showed just how ignorant she actually is. I mean, why do you have to use that insult in the first place? Why is she fighting so hard to be able to say something that hurtful and demeaning toward another person based on who they are? I know Marlo wouldn’t appreciate it if somebody called her a derogatory name based on her gender and/or race, so the fact that she used an offensive word toward gay men is just ridiculous, as is her insistence on defending her word choice.

And, real talk, why is Miss Lawrence, a rather lovely individual, not taking her to task for saying it? I don’t see how you can associate with someone that can so easily spit out comments like Marlo did. If that’s one of the first things you go to in an argument, there’s got to be some comfort there in using the word, so why is Lawrence still gal pals with someone that close minded?

The Real Housewives of Atlanta had a calm, interesting episode that backed away from the in-fighting and focused on the girls themselves. Though the fighting is the bread and butter of the show, if you don’t care about the women or know what they’re going through, it makes much less of an impression than if you do. There’s only a few episodes left in this horrifically long season and this episode felt like the calm before the season ending storm to come.

Thoughts, Quotes, & Observations:
-“You men know how to wear nice ties, huh?”
-“There’s a lot of people in my neighborhood who need a divorce, honey.”
-“Go ahead, Benson.”
-What did you think of Jo Dee’s finished song? It gave me cute Colbie Caillat vibes, for some reason.
-Apollo should have his shirt off in every episode from here on out. Goodness.
-Next week on The Real Housewives of Atlanta: Kim and Cynthia get into it at Ayden’s christening, Kroy comes home, and NeNe has a talk with her youngest son.