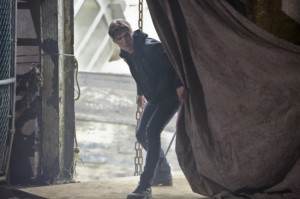 The concept of family takes on multiple meanings on a show like The Secret Circle. The main catalyst for everything we’re seeing lies with the biological families of the center, whose deaths and mysterious secrets have shoved the circle together and forced them to figure things out on their own. There’s a lot of underlying abandonment issues floating around Chance Harbor, understandably leading each member of the circle to look toward one another in hopes of establishing a true connection. Though they all have (or had) somebody there, the experiences that Jake, Adam, Diana, Faye, Melissa, and Cassie have had together have bonded them together for good, binding or no binding. Their commonalities, both in terms of perspective and home dynamic, have formed some type of secondary family, something that each of them has been craving, magic or not magic.

In “Family”, the first season finale of The Secret Circle, those connections were explored, both for the good and the bad, in an episode that was, to put it bluntly, bad ass. I mean, The Secret Circle has not been that shy about putting dark imagery out there, but the heightened stakes, level of violence, and spooky ending montage all elevated it to another level. Getting a clearer idea of what exactly Blackwell was aiming for in his formation of the circle, for instance, gave the episode (and the series) the first completely unfiltered look at the danger they’ll be facing from here on out; until now, we had only gotten bits and pieces of intel, cobbled together with chewing gum and a prayer. But now, we know that Blackwell is basically magical Hitler, wanting to rid the world of all non-Balcoin witches, four other Balcoin children waiting in the wings to come to Chance Harbor. I’ve had my problems with the Blackwell/Balcoin angle in the past, but the whole “you thought that you got rid of me – just wait til you see what’s next” tone of the final confrontation between him and his daughters packed quite a punch. It provided a look at the next enemies the circle will have to deal with, something a little less certain now that they’re unbound. Tasting that kind of freedom and independence after so much time being locked down can be intoxicating, particularly to teenagers with magical powers, so they’re going to have to find a way to come together once more.

But the thing I loved about the montage was Adam, dear (former) wet blanket Adam. I like Adam when he’s not wallowing in his man-pain over Cassie and in “Family”, he kind of killed it. He got a little passive- 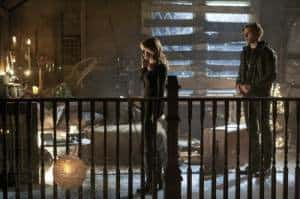 aggression out on Jake, he had a (very tender) moment with Melissa outside the ferry, and he may have gotten in too deep with the crystal skull. That last thing intrigues me most exactly because of Adam’s wet blanket-ness; he tries so hard to be good and just and a nice person, that getting in contact with dark magic can take his character to a lot of pretty fun places. He’ll have an identity outside of his dating partner and Thomas Dekker can finally tap into the menace and villainous rage that he had earlier in the season upon being possessed. This is a way to keep the circle on its toes and from becoming too complacent, a pretty classic horror twist (you think you’re safe, but one of the good guys has turned sick/evil) that could give the show a lot of energy in the second season.

Plus, this makes his increased connection to the rest of the circle that much more important, as Adam-circa-episode-one going evil would’ve been bad but not that bad. Not uncontainable or truly breaking. But Adam-circa-now, after forming a friendship with Melissa and getting on terms with Cassie and Diana, will have a major impact going forward, letting another character aside from the Balcoins fight the temptation of dark magic while never letting the circle feel safe.

The only thing that didn’t fully work for me was the Charles plot, unfortunately, and it’s not even the plot itself that I had a problem with. Having him, emotionally wounded and utterly repentant, make a sacrifice for Diana by taking on Eben’s demons made for one of the most striking, gut punch-type moments of the series thus far. It was a heartbreaking piece of collateral damage from Blackwell’s master plan, another chip at the little emotional (and familial) stability that these kids have and a way for Charles to come full circle. He took away Cassie’s mother in the pilot and through his remorse, tries to save her, his daughter, and their friends through giving his own life. Death hasn’t been as big of a deal on The Secret Circle, but this had the impact, both in terms of plot and resonance, that no other deaths have had thus far. So why did they have Charles survive? That took so much of the weight of the scene on the ferry away; the image of Charles, face literally crawling with demons, hurling himself into the water for his daughter gave the episode a major jolt, but that jolt is a little gentler now. And that’s a shame, because the show should be striving for this type of forward movement, this type of danger lurking around all corners, this type of true definition of the word family.

And to have Diana not even react to Charles giving himself up for her didn’t sit quite right with me. Obviously, the girl had just channeled dark magic and killed her biological father, but still, you’d think that something like that would have stayed with her or been worth a comment. A tear. A confession. Something, anything more than we got – I get that her making the choice to go with Grant across country was motivated by the “death” of her father, but you didn’t get to see the impact that the realization had on her and it felt like a missed opportunity.

They say that you can’t choose your family, but that’s not necessarily true. Family’s not just the people that you share a genetic code with; family is those that you’ve shared experiences, the joy and pain of life, with and have grown with accordingly. The circle has went from a ragtag group of witches that can’t really stand one another to a wounded, vulnerable family that has had to have one another’s back more than any of them expected. They don’t always get along, nor do they make the right decisions, but the circle have proven that through working together and harnessing their powers, anyone that tries to take them down with have to put up a truly monstrous effort. And considering the quality of the final few episodes of the season, the idea of watching the circle grow even tighter and more confident in their abilities for another season sounds pretty darn great.

Thoughts, Quotes, & Observations:
-“Oh, I am so back.”
-“Guys, there’ll be plenty of time to cry when we get out of here.”
-“You do realize you’re full of demons, amongst other things?”
-“Then who? Ex-witch hunter? Evil princess number two?”
-The ending montage was set to a song by Silversun Pickups called “Skin Graph” that everyone on planet Earth should buy. And I do mean everyone.
-I still think that Grant is something bad. I don’t know what, but I can’t completely trust him.
-I really liked seeing the return of kick ass Faye on the ferry.
-This could have pretty easily served as a series finale, thanks to the allusions to the boat fire, the Blackwell revelations/defeat, and the haunting final image of the four Balcoin children.
-Another thing I didn’t quite like: the Blackwell/Cassie/Diana scenes at the house got a bit exposition-y, but I liked the content.
-Thanks to all of you who read, commented on, or shared any of my reviews this season. Here’s to hoping we can all gather in our circle come fall and do this once again.