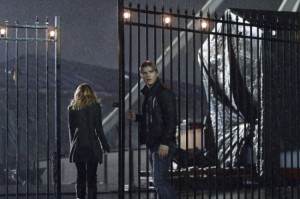 The Secret Circle has been one of those shows that I want to like more than I actually do. Don’t get me wrong, I’ve (mostly) enjoyed hobnobbing around Chance Harbor, giggling at Faye’s dismissive one liners and marveling at how (darkly) beautiful the show’s visuals can be. I just felt like this was a show that could afford to take it up another notch, its default setting being angst and its danger being fairly minimal, at best. Everything was there for the show’s taking – a pretty good cast, themes that could parlay from their “witch self” to their “teenage self”, and yes, those darn visuals – but it seemed like The Secret Circle had been unwilling (or didn’t know how) to put them all together to fulfill its potential.

Although it’s had several very good episodes, I think that “Traitor” is the first time that The Secret Circle has touched greatness. Gone, for the most part, are the show’s weaknesses, with very minimal Adam/Cassie brooding, more focus to the storytelling, and a genuine surprise or two along the way. I mean, how can you not adore the circle searching for a crystal at the spooky Hudson Fields, a run-down amusement park where the traitor witch had set up camp? The Secret Circle has been rather adept at creating horror movie-esque scenes in the past, adding in that almost-gothic sense of paranoia to send the circle spinning, and this proved to be another case of that happening. The setting and music created a nice dread about the entire final 10 minutes or so of the episode, but every element (the dead witch hunters, the random power, the claustrophobic hideout of the traitor) clicked here.

Pairing the (hormonally charged) Jake and Faye, along with increasingly distant Cassie and Diana, gave two different looks to the scene, the latter duo uncomfortably tense after the revelation that Diana is the other Blackwell child. The fact that she’s actively checking Cassie for her poor decision-making and reliance on the dark magic may make her seem like a wet blanket of Adam proportions, but I appreciate the fact that somebody, anybody can stand up to our fearless. Diana’s pragmatic and controlled by nature, so she’ll naturally clash with the naive heroine; the family lineage issue only gives each of their confrontations that much more complexity.

The traitor, the one dealing magic to Eben and the bee in the circle’s bonnet, turned out to be dearly departed Nick, struck down by a demon in the early part of the season. Even though I knew going in that he’d pop up, I 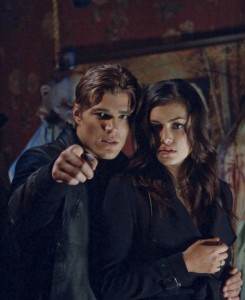 was still taken aback by the final reveal, which could potentially be a game changer on a show that needed that little jolt. His return will have major implications, whether they be circle (will he rejoin? if he does, will Jake have to leave?) or Melissa related (how in the world will she react? will this make her regress?), but the main thing is about the possibility of resurrection. If a witch can come back from the dead, this makes Eben that much more dangerous and a near-constant threat to the circle, thanks to his dispatching of Isaac and new powers; additionally, we don’t know what had to be done for Nick to come back. It opens up a lot of potentially interesting threads for The Secret Circle and if executed properly, could be the thing that expands the show’s universe and ceiling of creative possibility.

The Adam/Melissa side plot, involving liquor and old coins, was a pretty fun way to have two characters that don’t interact normally spend some time together. Even though it was under the guise of his relationship (or lack thereof) with Cassie, their drunken discovery of how to clock/uncloak an object and, later, Adam’s grandfather’s dirty mags brought a little levity that the episode needed. The Secret Circle has a fairly decent record of using humor, particularly having humor flesh out character relationships and dynamics, and “Traitor” did just that, further solidifying Adam and Melissa’s friendship and giving them both something to do. They’ve been given the least to do of the six members of the circle, the former generally pining over Cassie and the latter Faye’s sidekick, so putting them together and having them be the ones to figure out where the crystal was made the episode feel more rounded. A tangential Adam/Melissa plot wouldn’t be the end of the world as we know it, especially if we still had character moments like in “Traitor”, but it was relevant and that only made it better.

I had been a little unsure about the future of The Secret Circle, in terms of where all this is heading, if anywhere. Judging by “Traitor”, there’s a lot of places that the show could go, which makes me excited for the final two episodes of the season. With Nick back, Blackwell not quite the Ward Cleaver of the supernatural world, and another crystal out there, Chance Harbor could get quite a bit more intriguing going forward. The only question is if The Secret Circle is ready to embrace greatness or let it pass them by.

Thoughts, Quotes, & Observations:
-“This kind of grieving is more my speed.”
-“Your daddy got around.”
-“We totally got out magic-ed in our own magic house.”
-“I was too busy being amazed at it disappearing.”
-“I’ve had at least a dozen nightmares start this way. Most of them involve you.”
-“If we live, remind me to download this song.”
-“Worst. House. Ever.”
-I loved Faye and Jake getting it on after the wake for Jane. There’s something about each scene they’re alone together that just sizzles.
-I’m a touch less enamored by the adults, if only because I have no idea what Dawn’s doing. The Charles/Blackwell rivalry is good, but she seems to be playing both sides of the fence.
-It looks like it’s me and you for the rest of the season, guys. I cloaked your other writer, Mark O. Estes, and shan’t be uncloaking him until after the finale.
-Next week on The Secret Circle: With the final crystal uncloaked, the circle tries to get their hands on it before anyone else. Meanwhile, Blackwell casts a spell on Charles and Cassie makes a dangerous discovery.