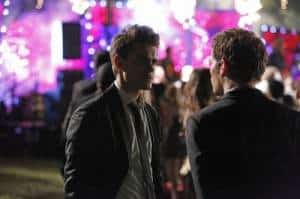 “Were you prepared for this?”

Being the mid-season finale there is a certain expectation that there would be a huge amount of twists and turns and this episode of The Vampire Diaries sure did have all of that. Amidst all the action and back stabbing (both literal and emotional) the execution felt slightly muddled and meant this was a good, but not great, outing.

The endgame was, of course, to get rid of Klaus (Joseph Morgan) and they acknowledged that their plans in the past have a habit of falling apart because someone’s humanity gets in the way. Elena (Nina Dobrev) believed in this case that she would be that person even if she had shown great deception in daggering Rebekah (Claire Holt). The sadness and excitement from Rebekah about her first high school dance was rather sweet, as was when Elena gave Rebekah her necklace. This was, of course, followed by the dagger, which Elena felt bad about. Not sure if Damon (Ian Somerhalder) helped with his Katherine comparison.

Speaking of Katherine, she has been absent since Mikael (Sebastian RochÃ©) had fed on her, but it seemed obvious straight away that it was Katherine posing as Elena at the party. Nina Dobrev is terrific in these dual roles and especially in these moments where she is playing Katherine playing Elena. The earlier conversation between Elena and Damon where he told her that he didn’t want her anywhere near it reinforced this, followed by Matt’s (Zach Roerig) nervousness when they arrived at the party. Despite Matt’s reticence to be involved with any vampire business it was good to see him included this week. The Katherine reveal, whilst unsurprising, was good just for the “kaboom” as she threw the wolfsbane grenades at the hybrids.

The other Katherine plan that involved Stefan (Paul Wesley) is more complicated as it appeared to go against everything that we have seen from Katherine in the past. Katherine has always been relatively self-serving. Wwe have seen the odd moment of humanity, but she is always willing to sacrifice others to save herself. In this case she opted to save Damon over Klaus being killed; she has been running from Klaus for over 500 years and has done everything possible in the past to escape him but now her humanity has stopped her from getting rid of him completely. Yes, humanity is a vampire’s greatest weakness and it would seem that the Salvatore brothers are Katherine’s; it was Katherine and not Elena that was the weak link in the plan.

The other aspect in this reveal that involved Stefan is more problematic and felt somewhat clumsy in the execution. Despite having his freedom to go anywhere and do anything unburdened by his humanity, he agrees to what, at this point, appears to be a half baked plan. Katherine talks Stefan into a plan that really isn’t going to end well (a fact he has just berated Damon and Elena about) and whilst it is amusing to see him get the upper hand for a moment, it is likely that Klaus will retaliate in a less than pleasant manner. If Stefan has any plans to open the coffins can he please start with Elijah (Daniel Gillies)?

Mikael’s demise was quicker than expected and it feels like we have lost this character too soon. There was no way that Mikael could live in the same space as Klaus thanks to the 1000 years of hate that has built up and it was always going to be Klaus that would survive (after all, he is the regular on the show), but the chemistry between the pair in their confrontation was excellent and it’s a shame that there will be no more of that to come. Mikael’s repeatedly using the term “coward” to describe Klaus, followed by his assertion that impulse is the one thing that stops Klaus from being great reveals his weakness and could be something that will be used against him in the future. 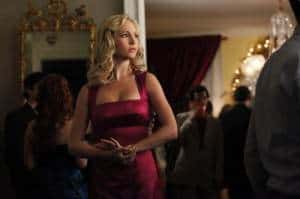 In terms of how these events have changed relationships, one is getting stronger whilst another seems to be dissolving. There was a big issue of trust and it now looks like Damon is who Elena has the most trust in. A season ago this might have seemed like a strange prospect but the writers have been pacing the evolution of this relationship at a believable rate. Some fans are probably wanting it to go quicker and it looked like that could happen at the end of the episode but thanks to a phone call from Katherine the moment was interrupted. Elena is now willing to accept that they have to let Stefan go, but how will they feel when they find out what Stefan has done with the Original caskets?

The relationship that is suffering is between Caroline (Candice Accola) and Tyler (Michael Trevino) as his loyalty to Klaus is causing problems. Tyler explains that this version of himself is better, because he no longer has to go through a painful transition once a month. This is not good enough for Caroline though who can’t deal with the control that Klaus has over him; is there any hope for these two?

-Rebekah says that she loves and hates Klaus in equal measure and this is also the perfect way to describe Stefan and Damon’s relationship.

-Speaking of brothers, it is completely understandable as to why Bonnie (Kat Graham) doesn’t want to talk to Elena about Jeremy (Steven R. McQueen). They might be best friends but there are lines that can’t be crossed.

-Damon looked genuinely worried/horrified after Mikael had fed on Stefan, is this just a brotherly concern or because it seems unnatural to feed on a vampire?

-Caroline has an affectionate nickname for Rebekah; evil blood slut.

-Nice to see Bonnie pulling her vampire migraine trick out of the bag after a pretty epic fight between Damon and Tyler.

-What will be the plan for Rebekah now that she is daggered and stored in the ever useful Salvatore basement dungeon?

-It wouldn’t be the mid-season finale without someone getting their heart ripped out, nice RSVP Damon.

-The only weapon that could kill an Original went up in flames. Will there be another alternative discovered in the future?

As I said at the start of this review, this was a good, but not great, episode even with all the developments that occurred. This slight criticism is because this show is consistently amazing and as this is the last episode until 2012 I had some pretty high expectations. Despite my reservations there were still some knock out scenes and I am more than looking forward to when the show returns in two months.

What did you all think? Any disappointed fans out there? Did you enjoy seeing My Morning Jacket? Glad to see the Elena/Damon relationship slowly progressing? Let us know in the comments below.

The next episode airs Thursday, January 5 and you can check out the promo here.