To celebrate the renewal of Fringe, I’ve been contemplating the science of immortality! 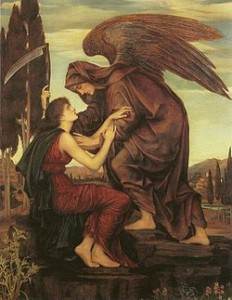 Now that William Bell has succeeded in pulling off the ultimate science experiment–life after death–it’s quite possible that he could achieve immortality via advanced technology. Is this why he, presumably (he does have the decoder key after all), created the shapeshifters in the first place? So that when he died he would have a mechano-organic host designed exclusively for him? These were my first thoughts when I discovered his soul was floating around, so now I’m wondering why he’s considering using Jean the cow, among others, as a host. Couldn’t he have given the soul magnet tea to a shapeshifter? It seems they would be the perfect hosts. But perhaps I’m assuming too much about his involvement with the shapeshifters.

It is true, however, that for William Bell an afterlife has always been a scientific possibility. After all, energy cannot be destroyed and so the consciousness must gosomewhere, right? So says the science of Fringe, at least. (I would argue that the energy of the mind, like the energy of the rest of the body, would decay and turn into food for the worms…or something like that.) Walter tells Peter that he and ‘Belly’used to argue about where the soul’s energy goes after death: ‘William theorized we should be able to capture that energy using what he called Soul Magnets.’If his theory was right then Bell would be sure to contact Walter from ‘The Great Beyond'(‘6B’).

Now, in ‘Stowaway’we have someone trying to catapult herself into this so-called Great Beyond. (It’s odd that the fringe team is even entertaining ideas about the great beyond, but that’s an argument for another day). When Agent Lincoln Lee and Peter are looking through Dana Gray’s belongings as part of their investigation, the one book they find that is ‘not clinical’provides the clue for understanding what Dana is doing–trying to die. The book is titled The Afterlife of the Soul. Later, a Christian legend is given some attention: the Ascension of Azrael. Azrael is an archangel, sometimes considered an angel of death. Dana’s client, the crazy train bomber (or as Peter comments upon entering the guy’s secret room: “hello, freak show”) says, ‘like Azrael, let his angels carry my damn soul to heaven,’as a preamble to shooting himself in the head. Supposedly, Azrael was a soul who could not move on from purgatory without the aid of a host of angels, whose purity equalized his own sin. In some faiths he is a figure to whom grieving families can pray for their deceased loved ones. He helps souls cross over to the afterlife, something Dana needs, but he’s also considered something of a grief counselor, just like Dana. It is interesting that she is described both as a ‘compassionate soul vampire’and a ‘stowaway to heaven.’Both terms might also describe Azrael.

Bell, on the other hand, is a stowaway to the living, creating an interesting narrative counterbalance. He, too, is a compassionate soul vampire, making sure that his host’s consciousness remains safe. We hope. But I’m still wondering if he has something up his sleeve. Will Leonard Nimoy return as a shapeshifter (if a somewhat decrepit one)?