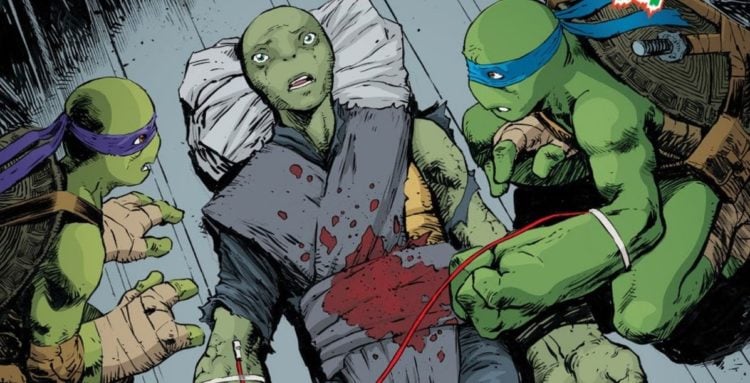 Things have certainly changed in the world of the Teenage Mutant Ninja Turtles, as there is now a female turtle among them. Jennika, who long-time fans might be able to tell others does have a very positive association with the turtles and their father figure Splinter, as he took her in when he became the head of the Foot clan. It’s a long and drawn out story but Jennika and Casey Jones became one another’s love interest and she did become a very trusted ally of the turtles. It might seem a bit confusing but the story of the turtles and their allies did continue after the movies and has been ongoing for a while now. But Jennika’s mutation into the next turtle is something that might have a lot of people scratching their heads and wondering how anyone is supposed to buy this from a logical standpoint. Thankfully the whole story of the turtles and those that interact with them has been built on defying logic so it’s easy enough to go with it.

Tessa Smith from ScreenRant drops into the explanation of how Jennika, a regular human being, becomes a green-skinned humanoid turtle pretty easily. You might think that a blood transfusion between different species would be kind of problematic if not deadly, but apparently the ooze that sustains and was responsible for the turtles to become what they are might have acted as a buffer or possibly a catalyst that allowed the transfusion to work. Given that Donatello is the genius of the bunch it would almost seem that he would know something about how risky this was and might think twice about it, but then again this is a comic and real thought doesn’t always apply. The whole reason that Jennika needed this was that she’d been stabbed by another member of the Foot clan when she’d decided to stay loyal to Splinter and not turn against him. Obviously some people can’t take rejection all that well since the resulting stab landed Jennika in a world of hurt and contemplating her mortality in the next instant.

There might be some folks out there thinking “of course we need a female turtle, what else is feminism and their constant political lean going to touch”, I mean that’s only natural in today’s societal landscape. But honestly Jennika isn’t the first one. Anyone remember Mei Pieh Chi? Her story was that she was covered with the same mutagen that created the turtles, only she was swept away only to be discovered, raised, and trained by another master until he revealed her origins to her. Eventually she made her way back to New York where she united with the turtles. But it would seem that her story has kind of been pushed aside throughout the years, though it would seem that now would be a perfect time to remember.

The whole idea of mutated blood creating a transformation in a human body is something that sounds way out of left field, possibly behind the wall, and on top of that it sounds extraordinarily painful given that bones would have to reshape, tissues would have to be torn and mended or expanded in ways that would defy every biology lesson ever taught, and of course the emergence of a shell and the frontal plates would be excruciating since that’s a great deal of growth in what seems like second or minutes. In other words, the shock should be enough to put anyone out if it didn’t kill them outright. Thank goodness for comic logic since otherwise this simply wouldn’t be possible in any stretch of the imagination, nor would it please a lot of people since like the Hulk, one has to think about where the added mass that would create a character like this would come from.

Having another female on the team is something that seems as though it could divide fans, especially with this sudden revelation that mutated blood can turn a human into a turtle and grant them a great deal of mass and the needed materials to grow the necessary body mass. But all in all the character seems to be accepted since she’s simply a changed version of the character that people have already come to like and respect. That in and of itself is easy to understand since Jennika is still something of a badass even though she now resembles the four heroes she’s been allied with. But there’s an interesting question to consider following this transformation. Will her body continue to resemble a turtle thanks to transfusion, or will her human DNA win out and eventually morph her back into human form? Given that she and Casey are together it might be an interesting story line to read since it could open up a lot of engaging dialogue and personal issues.