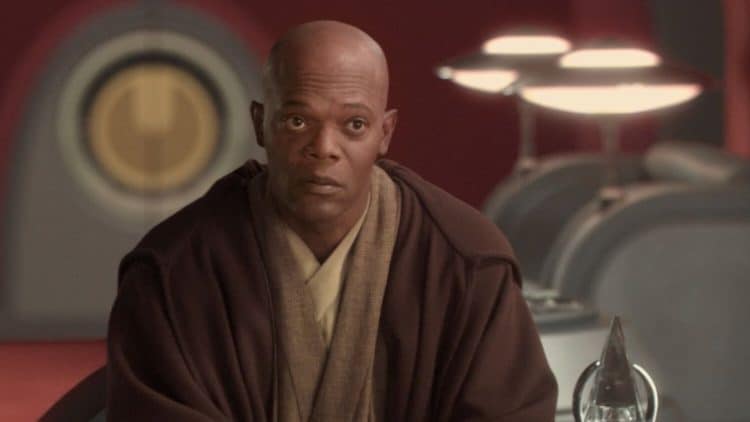 While this theory is just that, and more of a rumor really than anything that a lot of fans would like to see come true, the story of it and the possibilities it entails could be kind of interesting since when one really thinks about it, we didn’t see Mace Windu die. But if he were to come back in The Mandalorian, even if it’s not until season 3 or 4, if there is one, it would still something that fans would want to see. Mace Windu is one of the greatest Jedi we’ve been introduced to since the prequels came out, and whether a person likes the prequels or not, the fact is that Samuel L. Jackson made the character of Mace come to life in a very impressive way. His loss to Emperor Palpatine/Darth Sidious, thanks to Anakin Skywalker, in Revenge of the Sith, was regrettable, but again, we didn’t actually SEE him die. Considering how powerful Mace is in the Force it’s entirely possible that, like Yoda, he was able to find a way to arrest his fall until he was banged up and beaten, but not dead. In that manner, he could have found a way to hide out and even get off the planet with his life, or find a place to hide and lay low for a while since the Jedi Purge would have been a gaping wound in his heart just as it was Yoda’s.

But over time it could have happened that he would have learned how to commune with those that had passed on into the Force, or it could be that he simply found a way off of Coruscant and determined that he would do the smart thing and stop being a Jedi. It’s hard to picture since Mace was so resolute, but he was also practical and wouldn’t go wasting his life if he could come back later. After a while, it’s likely that with the fall of the Empire he decided to stay where he was since the Jedi Order was long gone. But then think of this, maybe during the last trilogy, he sensed the shift in power, which would explain why his voice was heard along with so many others. At that point, it could have been that he was dead and done since The Mandalorian is taking place between the original and latest trilogies, but where he would fit into the show would come from the meeting with Ahsoka, who is already said to be limited in this season. Maybe she’ll end up directing Din Djarin to Mace at some point, as it could be that she knows of Mace’s survival but has decided to leave him be at his request or simply because she understands the need for solitude.

Some are even thinking that Mace might take up the role of a Mandalorian, which would be funny since the Mandalorians and the Jedi don’t like each other much. There are others that think that maybe he could be training other Force-sensitives in the Unknown Regions, or that he would have been in contact with Luke Skywalker to teach him the ways of the Jedi that he was never given. There’s also the idea that if The Mandalorian does seek him out that so would Boba Fett, who is already a looming figure on the show. A showdown between an aged Windu and Fett would no doubt be a vicious fight, but some think that it would end with Fett taking Windu’s life and finally gaining a measure of justice for his father Jango, who was killed at the beginning of the Clone Wars. That would be a confrontation that a lot of people would be up for no doubt since it would have been a long time coming. But the mere mention of Mace Windu is getting a lot of people excited even though it’s a rumor at this point and not a well-founded fact. It is a desire as well though since bringing another old face into the show would be welcome, and bringing a high-ranking Jedi would also be something that might get people a little excited.

There’s nothing saying that it will happen but Star Wars fans and theories go together nicely most times even if some of them get a bit outlandish. But people have been wanting to know what happened to Mace Windu for years now since the last time we saw him he was being flung out a window, apparently to his death. Knowing what we know about Jedi though and how powerful Windu really was, it’s kind of hard to accept that he was dispatched that easily, so it’s not hard to think of why someone would come up with this theory. If it did prove to be true that would be a perfect addition to the show.