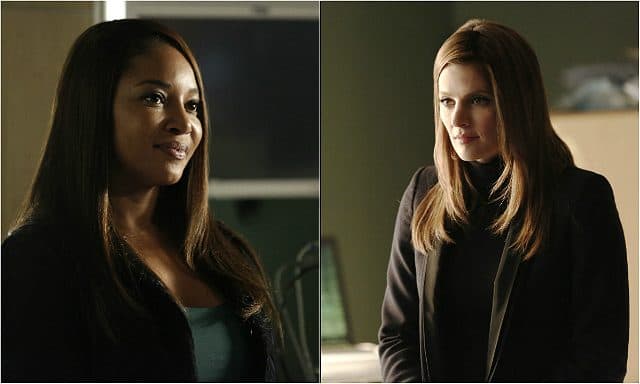 While viewing Castle season 8 episode 19 the fateÂ Castle showrunners Alexi Hawley and Terence Paul Winter have for Captain Kate Beckett (Stana Katic) might as well have been pasted on her forehead. Â The plan is clear: the finale is going to kill Beckett. Â Oh sure, it will be some kind of cliff-hanger – they’ve been talking about it for weeks in interviews with TVLine.

Being that the showrunners have spent all of Castle season 8 attempting to rip Beckett’s character arc apart and turn her into some kind of deranged madwoman, it’s not surprising to learn they plan to completely wipe Beckett out. Â What’s disappointing is that ABC has allowed this to go on & are willing to have her killed off. This is adding to the impression that ABC thinks being the home of Shonda RhimesÂ and her ShondalandÂ production company means ABC can be sexist-bordering-on-misogynistic with other shows and not be called out on it. They are wrong.

While reprimanding Hollywood in general on the topic of sexism,Â last weekÂ Maureen Ryan, theÂ Chief TV Critic at Variety, hit on ABC in particular.

The truth is, the Ripa situation is part ofÂ a spring trend in which all kinds of women on all kinds of showsÂ – and now, including morning TV –Â have been shown what they’re really worth. They’ve beenÂ killed off, written out and otherwise disposed of. Or blindsided.

(It’s worth noting that two of the most high-profile TV controversies of the past few weeks –Â the exit of Katic and the “Live” brouhaha –Â have taken place at ABC.[…])

The above was in reaction to news of the firing of Katic and Tamala JonesÂ followed by the awful way they’ve dealt with the Kelly Ripa/MichaelÂ StrahanÂ situation. Â Castle season 8 episode 19, “Dead Again” Â – with its foreshadowing that’s as subtle as the damn spaceships in that Will Smith movie Independence DayÂ – had not aired yet. Â Now that it has, her comments about networks not caring about fans and the willingness to kill off beloved female characters without concern seems more like a prophecy.

Castle season 8 has been an infuriating season pretty much from episode 2. Â  The blatant sexism, and attempts for the new regime to twist this once charming show into favorite of Â fifteen-year-old boys and members of the MRA,Â  has been a ratings disaster! Â Nevertheless, as Castle 8 x 19 shows, this is the direction the show is hurling forward in.

One thing I will say is that I feel badly for Robert Hanning. Â  This is the writer who did classic Castle episodes like “Veritas,” “Still,” “Recoil” and “Demons” – all which show his great skill and talent. Â However, a television writer can’t write outside of the vision of the showrunners. Â  When the showrunners are off-base, it brings everyone else’s work down with them.

There are still those moments in the episode where Hanning does bring in some classicÂ Castle touches. Â My favorite is when he has Medical Examiner Lanie Parish (Jones) Â and Alan, the would-be-victim played byÂ JonathanÂ Silverman,Â finishing each other’s sentences. Â Beckett and her writer husband Richard Castle (Nathan Fillion) look at each other and ask if they sound like that! It’s one of the best scenes in the episode!

This scene feels really good because it gives viewers a touch of what Caskett on the job used to be like. Â At the same time, when the behavior transfers to Lanie and Alan, it becomes a nice reference to show that Lanie and Alan are connecting romantically as well. Â We all know this is how Castle and Beckett started out. Â (It’s also a reminder of why it feels so icky whenever they’ve had Castle and his daughter Alexis [Molly Quinn] have that kind of scene!).

There are actually a number of good Lanie Parish bits in the episode…. Â It’s almost like they wanted her to have some good things for her acting reel because they were planning to fire her and had barely used Lanie this season. Whatever the reason, I’m glad they did it. Â My other favorite scene is the one between her and Beckett, because we’ve so rarely had the opportunity to see these two in friendship mode.

Unfortunately, there’s not much more of this kind of Lanie and Beckett thing. Â A big chunk of the episode is watching Castle working with his, “theory” that Alan is a superhero. Â This entire idea is a big flaw of Castle, “Dead Again.” Â  First of all, we have to watch Castle acting like a fool for huge stretches of time, and Â then there is never a reasonable explanation for the gag of Alan appearing as dead, Â but then surviving the attempts on his life. Â The show’s creator, Andrew Marlowe, always insisted on finding some kind of science to explain wacky events in a CastleÂ case. Â This season, all that matters are the opportunities for Castle to go on for a minute and a half about nonsense.

Â If I wanted to watch Captain Hammer’s Sing-Along-BlogÂ I’d pull it up on YouTube. Â ABC seems to think that what works as a fun web series will make great TV, but the two don’t really match up. Â Haven’t they learned this from the failure of Galavant to capture an audience? Shows like that are too niche for television. Â They work for things like Â YouTube where people will watch the same thing over and over again, or a streaming service, where people pay so that they can have access to the type of things they like. Â A web series can be a huge success as a web series but not be right for television. Â A million hits on YouTube does not mean a million people watched it. Â Castle’s long stagey comedy scenes are best taken in on one’s iphone while waiting in line at the bank – not in the middle of a TV show.

The second big problem – and the more painful one – is the whole LokSat story set up for when they kill Beckett. Â  The showdown between Beckett and defense Attorney Caleb Brown (Kristoffer Polaha) is well acted. Â However, because the entire LokSat story is badly structured to begin with, this latest piece doesn’t give viewers much reason to pay attention to what’s being said. Â At least, not untilÂ they hit the foreshadowing of what’s going to happen to Beckett in the season finale.

That chilling moment occurs when Beckett tells Caleb he needs to come back onto the good guys side – or else she’ll out him, and they’ll both be dead. Â This is more of the, “Beckett is a reckless player who doesn’t think” persona that the showrunners have resurrected from seasons three and four. Â The Beckett from season five through seven wouldn’t be going this route. Â It’s yet another complete disconnect from the true arc of the character, but here we are. Â Hawley needed to set up something to explain why Beckett dies, no matter how lame the story is. Â Here is the reason:

Caleb: Seven minutes Kate. Â Seven minutes. Â That’s how long the brain continues to function after the body dies, and as all of those synapses slowly stop firing off, that’s when they say our lives flash before our eyes. Â When your seven minutes come I sincerely hope that you do not flash to this moment, when you had a chance to live – and you chose not to.

We already know that the LokSat story is the season finale’s endgame, and that it’s the end of the Kate Beckett character on the show. Â They even set up the sting operation that we know is the trap that will lead to her demise if Castle gets a season 9. Â  Â If that season 9 happens,Â it’s reported that there will be a time jump . Â This isÂ most likely because these showrunners just want Kate dead and buried so they can move on to more “fun” times with Castle.

ABC however, may not have gone completely Â insane. Â In an earlier interview with Hawley and Winter TVlineÂ was told that ABC made them shoot an alternative ending that would wrap up the series if the show didn’t come back for a season 9. Â Well, fans have scrambled towards that news like passengers going for the lifeboats on the Titanic.

The hope is that if there is no season 9, the show would be wrapped up in a way that keeps Beckett alive and her and Castle together in a happily ever after kind of way. Â To that end fans have started a petition to have the show canceled, andÂ been tweeting things like “#CancelCastle” while the show airs – and they’ve been doing it with some effectiveness: 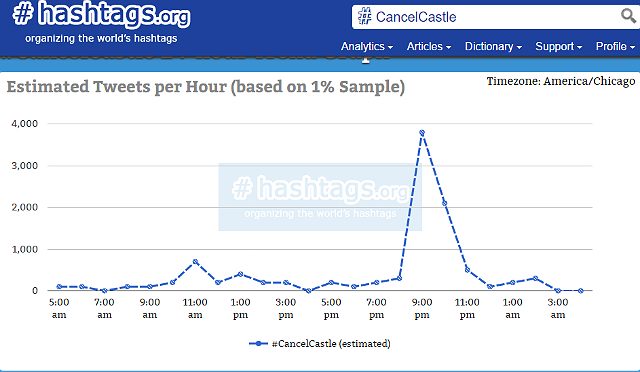 Â When you look at the big picture the idea that a Castle season 9 could be a successful one is faulty thinking. Â It may have once looked good on paper – no scratch that. Â I have no idea why anyone thought a season 9 without Katic and Jones was a good one. Â However, whatever thinking drove that decision, it seems clear that a reverse course would be in the best interest of ABC. Â They need to stop what will only become a bigger outcry the longer they say season 9 is a possibility.

Of course, Â for the fans sake, Â let’s hope that the alternative ending is one that is in fact happy. Â The attitude of the showrunners towards the character of Kate Beckett has been so harsh this season that they may just have killed her either way. Â If that’s the case, theÂ Disney/ABC Television Group president Ben SherwoodÂ might just want to call a couple of people back to shoot a third ending. Â If Kate Beckett dies, the anger towards the network isn’t going to end even if the show is canceled. Â Instead, that Variety article’sÂ suggestion that the network doesn’t value female characters and the women that play them – at least when it comes to the women that existÂ beyond the borders of Shondaland – is going to stick. Â  That’s not something that will just boil over and be forgotten about. Â You know how that old saying goes: beware of a fandom scorned….

After viewing Castle season 8 episode 19, the fate the Castle showrunners Alexi Hawley and Terence Paul Winter have for Captain Kate Beckett (Stana Katic) might as well have pasted on her forehead. The season 8 finale is going to kill Kate Beckett.