Generation VIII of the Pokemon franchise has been announced. As a result, there is now a frenzy of speculation about what interested individuals can expect, with much of it centered upon the Pokemon. So far, not much information has been revealed, but we do not what we can expect when it comes to the starter Pokemon.

Personality-wise, a fair amount of information has been revealed as well. For example, we know that Grookey will be characterized as being both curious and mischievous in nature, which promises to make for an entertaining combination. In contrast, the short animation suggests that Sobble will be much more timid when compared to its counterparts. In part, this is because it was capable of becoming near-invisible when concealed in water. However, it should also be noted that it scurried away with remarkable speed when it noticed Grookey banging on a stone with a stick. As for Scorbunny, well, it is looking like a confident, energetic go-getter that is said to run around on a constant basis. An impression that is strengthened by the patch of something above its nose that looks a lot like the bandages that can sometimes be found on anime and manga characters who are supposed to be tough and athletic. 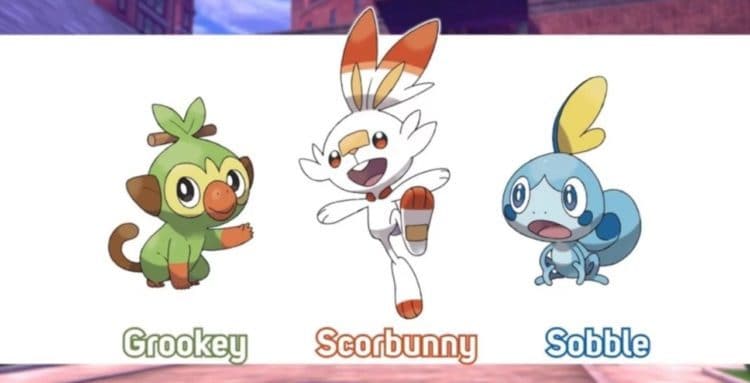 Of course, what the starter Pokemon look like in their first evolutions won’t be particularly useful for predicting what their final evolutions will look like. After all, Pokemon can undergo remarkable transformations in personality as well as remarkable transformations in appearance when they evolve, with well-known examples being the hyperactive Munchlax to the constantly sleeping Snorlax as well as the remora-like Remoraid to the octopus-like Octillery. Still, starter Pokemon transformations tend to be more subdued than that, so it seems reasonable that we can expect the final versions of the Grookey, Sobble, and Scorbunny to still look at least somewhat simian, lizard-like, and rabbit-like. As for their secondary types, it is certainly possible to make jokes about the inevitable Fire/Fighting starter as well as wild guesses based on tenuous pieces of evidence. However, there is just too little information to do much more than that at this point in time.

What Else Do We Know About Generation VIII?

With that said, while the starter Pokemon are definitely the stars of the reveal, there was a fair amount of other information revealed about Generation VIII of the Pokemon franchise as well. For starters, the two games will be called Pokemon Sword and Pokemon Shield. Furthermore, these two games will be situated in the new region of Galar, which has been promised to feature a wide range of environments that include but are presumably not limited to modern cities, thick forests, snow-capped mountains, and picture-perfect countrysides.

Curiously, there is good reason to believe that Galar is based on the United Kingdom, though with a particular focus on the English countryside. This can be seen in the fact that one of the cities boasts a prominent clocktower, which is very much in an English style. Moreover, this influence can be seen in the industrialized landscapes as well as the much more idyllic-looking stretches of rural countryside that have been shown off, which are very much reminiscent of English factory towns and English villages respectively. It remains to be seen whether this influence will run deeper, but considering past regions, it seems probable that it will manifest in Pokemon Sword and Pokemon Shield in various other ways as well.

Besides this, it is important to mention that the lead games for Generation VIII will be released for the Nintendo Switch in late 2019. As such, this is a real game changer because while the Nintendo Switch has a handheld console, it tends to be seen as a home console. There are plenty of Pokemon games have been released for home consoles in the past, but this is the first time that it will be happening for the lead-ins of a new generation, which is very exciting because of its unprecedented nature.