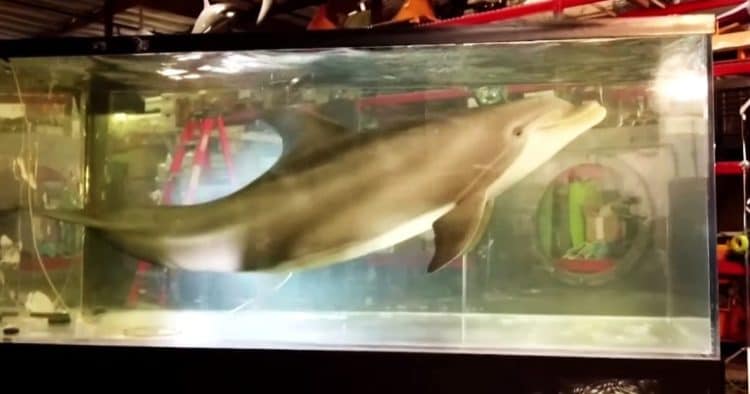 This would be something that might satisfy groups like PETA, wouldn’t you think? After all the idea of not having to worry over capturing dolphins, training them, and then having to breed them in captivity, which does feel kind of cruel to the animals, would no longer be an issue. It does feel as though someone might take offense to it for any number of reasons, citing that the dolphin isn’t ‘real’ and therefore isn’t worth as much, but the experience could still be a positive one for children that don’t know any better and for those that simply want the experience of being near a dolphin, even if it’s a machine that’s been programmed to act like its flesh and blood counterpart. The implications of this are great in a way since they reduce the need to harm or even inconvenience another living creature, which one would think might make a lot of people happy since it would be one more act that would allow people to enjoy animals without having to keep them in containment. But again, some might question the reality of it, especially given that unless the constructs were programmed with AI, it’s likely that people would see through the hi-tech puppet show rather quickly.

This is definitely something that would be best for kids that want to learn about our aquatic neighbors since it eliminates any threat or even the possibility of a threat to humans that want to get in the water with the dolphin, and it definitely eliminates any possible threat to another living being. Plus, it has been seen that real dolphins can be temperamental at times and even a little aggressive, so this eliminates the risk of anything happening that might be a surprise and not entirely warranted. It does still feel like a giant puppet show featuring a creature with rubber skin, but at the same time, it feels as though there are more positives to this than negatives. Given that the dolphin looks very real and the mannerisms are able to be programmed into the creature, it’s very likely that it could be the wave of the future if the idea begins to take on the kind of merit that its creators desire. The only real downfall at the moment is that they do cost million dollars per animal, so it’s not quite that easy to populate an underwater attraction or, possibly, a zoo with programmed animals that could be used in a very useful and efficient way to teach people about the real creatures that populate this world.

Perhaps this should be a goal though, to eventually phase out real animals in zoos in order to push animatronic animals that are programmed with the necessary behaviors and mannerisms of their flesh and blood counterparts, while the real animals are allowed to continue their lives in the wild, unhindered and monitored by human beings to ensure that they’re doing well and are still thriving. It’s likely that someone else has already come up with this thought since it’s very likely that something like this would be enjoyed by a lot of people, at least until someone had a snit about it since there was nothing else to complain about, or because they figure that people are trying to replace all animals with animatronics. Yes, there are people out there that would make such a ridiculous claim and they’re bound to pipe up the day that such a conspiracy is seen to be popular. People will trend pretty much anything these days if they figure they can get attention and something along the lines of claiming that fake animals are being seeded into the wild to observe and replace said animals wouldn’t be too far out of left field for a lot of folks. But if there’s one thing that a lot of people should know, it’s that even if an animatronic animal was released into the wild without supervision, animals aren’t quite that stupid. The thing would either be in pieces eventually or would be shunned since there are many ways that animals tend to identify who belongs in their group and who doesn’t.

From an educational standpoint and for the betterment of zoos and amusement parks all over the world this sounds like a very worthwhile idea, but also an expensive one without a doubt. It doesn’t sound like something that many keepers, whether in zoos or in water parks, would be willing to lean upon for their attractions since the unpredictable nature of wild animals is something that many people happen to love. But it does feel that one day this might be a worthwhile idea that will be given a much bigger nod than it’s already been given for this one dolphin. If nothing else, it would definitely be a step up from keeping live animals in cages.