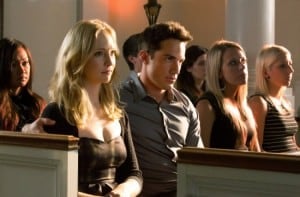 The Vampire DiariesÂ returns for season 4 in a couple of weeks and anticipation is high after the huge life changing event at the end of last season. There are big things in store for the residents of Mystic Falls and the second episode of season 4, which airs Thursday, October 18 will introduce some new characters.

The CW has released an official synopsis for the second episode “Memorial” (view promo photos here):Â A NEW DANGER COMES TO TOWN – Elena (Nina Dobrev) tries to cope with the extreme highs and lows that are part of becoming a vampire, and Stefan (Paul Wesley) and Damon (Ian Somerhalder) almost come to blows while arguing about what is best for her.Â  Damon decides to help Elena in his own way and asks her not to tell Stefan.Â  A stranger, Connor Jordan (guest star Todd Williams, Chicago Code), arrives in town and begins questioning Sheriff Forbes and Mayor Lockwood.Â  Connor’s actions quickly convince Stefan that they are dealing with a dangerous vampire hunter.Â  Jeremy (Steven R. McQueen) and Matt (Zach Roerig) are surprised to see a girl they used to know, April, (guest star Grace Phipps, The Nine Lives of Chloe King), has returned to town and is enrolling at Mystic Falls High.Â  At a town gathering, Elena comes close to losing control until Caroline steps in to help her.Â  Finally, Damon confides his feelings to an unexpected friend.Â  Kat Graham and Michael Trevino also star.Â  Rob Hardy directed the episode written by Jose Molina &Julie Plec (#402).

While we still don’t know exactly who the memorial is for (popular thought suggests Alaric) this does tell us that we will be meeting new important characters who will pose a threat to our group of supernatural (and not so supernatural- hey Matt!) beings. It’s not surprising to see that Damon and Stefan can’t agree on how to help Elena (have they ever?), but I am glad to see that Caroline will be playing such a pivotal role in Elena’s new vampire self. The other new character April sounds like less of an issue to the group, but how will she respond to the changes that her town and friends have gone through?

The Vampire DiariesÂ returns Thursday, October 11 at 8 p.m ET/PT on The CW. Â You can view a sneak peek for the season premiereÂ here, or browse through photos from the premiereÂ here.