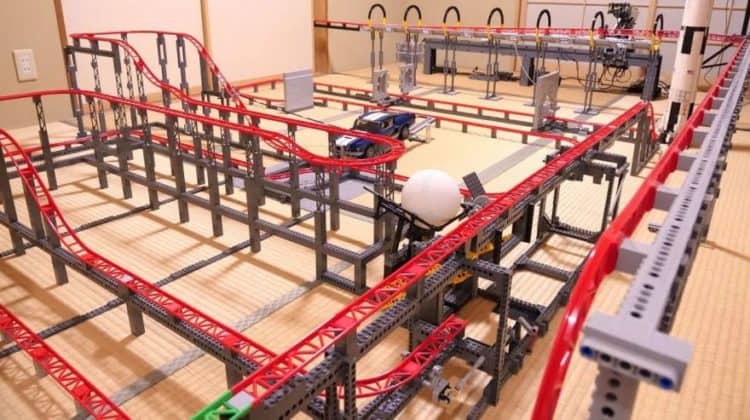 Do you get the feeling that some folks are ready to go back to what life was like before the pandemic? The tune hasn’t really changed since the first couple of months following the onset of the pandemic since people have been getting tired of staying indoors, of not being able to dine out, and definitely not being able to go to theme parks as they’d like. Rollercoasters aren’t exactly that high on the list for some folks, but obviously this person was missing the experience and decided to take on the challenge of creating their own rollercoaster with a huge set of Legos and a bit of imagination that came through in a very impressive way. Whether this will help anyone that’s missing the rollercoaster experience is hard to say, but it was still fun to watch since it’s the type of activity that can take up a lot of time and effort and it’s nice to know that people would appreciate it. GoPros have been used for quite a few things since they came out on the market, and this is just one more example of someone having an interesting idea of how to apply the technology to something in a simple way that can give an experience that might actually be kind of cathartic for some folks.

While it would be nice to visit a theme park at some point one has to think that with the pandemic still being cited by so many that gathering in big groups wouldn’t be a great idea. But on a rollercoaster, it does feel as though catching the virus from someone might not be quite as possible since if one really thinks about it, air circulation, even while people are screaming in delight or fear, should be great enough when one is out in the open that it wouldn’t be much of an issue. But standing in line, wandering through the park, and everything else would be an issue no doubt since even with a mask on the idea of a theme park being a ‘super-spreader’ event is just too great. It’s tough to think that opinions vary this much on the pandemic, but at the moment it’s often better just to keep moving forward as much as possible while doing what it takes to avoid making conflicts any worse. There’s a definite desire to get back to living the way that a lot of us once did, but as of now, all we can do is hope that it will happen this year or perhaps sometime eventually.

In the meantime, there have been a lot of people working their magic with Legos in this manner since this rollercoaster, a machine that’s been designed to make pizza, wrap presents, and do who knows what else has been made, and people have been showing their skill with Legos in a very impressive way. Let’s be honest and say that doing anything Legos takes time since there are quite a few small pieces that add to the intricacies of each design, and this rollercoaster is one of them that would need to be exact in order to work. The manner of locomotion is pretty cool since the rails fit perfectly through the underside of the carriage that was used to snag the footage. The stair-stepping method at a few key points in the track was intriguing, but it does feel that in a regular rollercoaster designed for people that this might not be a wise part of the design. Even the wall-crawling aspect and going straight up would need to be taken with care since the human body can only take so much jostling before it becomes a massive issue, especially with some folks that are highly sensitive to such things. Even watching this might make those that are prone to motion sickness a bit green in the gills since it does go through a few twists and turns that could leave the more sensitive individuals running for the nearest toilet. Yes, some people are actually sensitive enough that they can’t even watch something that has too much motion before they need to toss their cookies. But in real-life, this rollercoaster would be something that people might want, even if it was a little too jarring on even the most hardcore fans.

Hopefully, one of these days we’ll get to go back to the theme parks whenever we want, or whenever we can afford it, whichever comes first. For now though some folks are making due and doing what they can to simply enjoy the experience and make the best use of their time. Something like this had to take a while to make, especially when it came to ensuring that it would function as desired. Kudos to the creator, they did a great job.