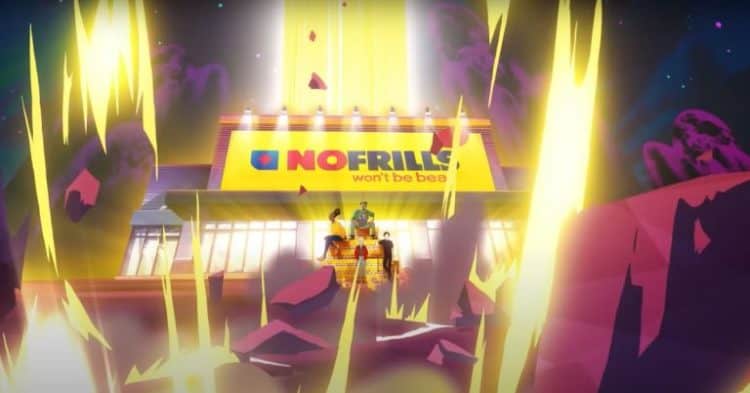 For a store that’s named No Frills, this chain apparently wants to make it known that it’s one of the best stores around and won’t be beaten. That right there kind of indicates that they’re attempting to market an idea that has, like it or not, been done before and in many different ways, but has yet to be a proven fact. Maybe it comes from working in grocery stores in the past, or perhaps it’s just from a consumer standpoint, but anytime any store feels the need to create a commercial that makes them look good, awesome, edgy, cool, or otherwise, just THE place that people should be visiting, there’s usually something they’re trying to compensate for. It’s hard to say that with No Frills since they have 200 stores spread across various areas and it would appear that they’re doing just fine, but this anime commercial makes it feel as though they’re trying a little too hard and could be aiming at a demographic that they might think isn’t being given enough incentive to visit the grocery store now and again. Then again it could be just a cool commercial that they commissioned because they had the money and the desire to see something cool with their name on it. Seriously, there doesn’t need to be some clandestine reason for everything, even if it’s something that costs a great deal of time and money. If a short spot on TV can cost a couple thousand at the low end then something like this is bound to cost a pretty penny to be certain.

Those that have ever worked at a grocery store in the past might watch this commercial and either roll their eyes or wonder why this was ever made in the first place. Granted, it’s kind of cool to watch and it might be a lot of fun if grocery stores were like this, or if there was at least a virtual experience that could replicate this. But working in a grocery store is different for everyone, especially depending on what part a person works in. some folks take on the whole store experience and manage to make it into a career as a manager, supervisor, even general manager or owner. But for those that start out at the bottom, such as the courtesy clerks, the baggers, and various other workers, a job at a grocery store is usually just that, a job. It’s not entirely glamorous, it’s not always how a person sees it in the movies, and it’s definitely not something a person wants to get stuck in for life unless they can make it work for them. Is it worth it to some folks? Absolutely. Is it worth it to someone going through school? Possibly. Is it worth it to someone that’s looking for something to do with their life? That’s debatable.

Working in a grocery store is different for every person since just like any job, it gives as much as a person puts into it. If a person gets in, does the job, and does it well, then there’s a good chance that they’ll ascend through the ranks and begin learning other skills and possibly go on to be considered as a person that knows their stuff and can be trusted with even more. Ambition in a grocery store usually means that you enjoy your job to some degree and want to take on more responsibility, and know very well that it’s not a glamorous job, but that it does earn a steady paycheck since people have to eat, and a grocery store is hardly ever if ever, going to be seen as anything but essential. But again, what a person wants out of this kind of job is going to depend on what they’re willing to put into it. Dealing with people is likely one of the hardest parts of this job since like it or not, some folks can be downright rude and even nasty to those working in the story for absolutely no reason, or for reasons of their own that they don’t feel like divulging. It’s kind of like working in the restaurant business, with obvious differences. Much like the restaurant business, the customer is not always right, unlike the malarkey that a lot of us were fed early on when we started working. The customer CAN be right and IS right when they have a valid point, but there’s no such thing as a customer being right all the time, thankfully.

If No Frills lives up to its namesake then it’s possible that it could be having a bit of fun with this commercial, and it could even be one of the more no-nonsense grocery stores around. But unless a person is able to step into the store and see, this isn’t the commercial to go by.