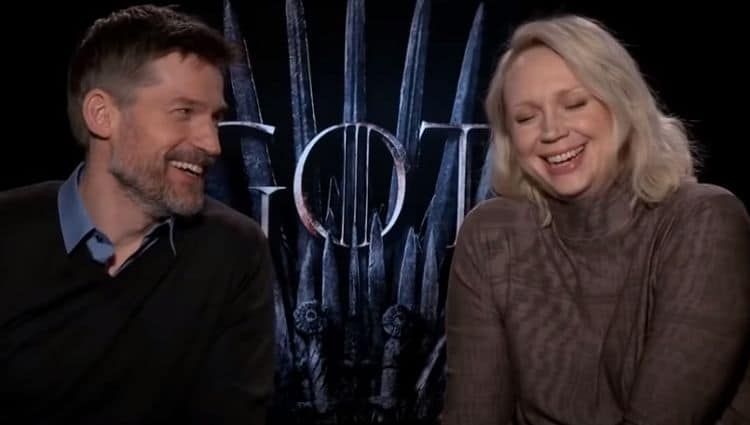 Out of all the pairings in Game of Thrones (yes, I get it, the show’s over) there are a few that are worth talking about simply because they turned out to have the best chemistry on screen. There are a few pairings that made the cut when talking about who really worked together and could make a scene come to life, and while Maisie Williams and Sophie Turner were definitely two of the fan favorites, Gwendoline Christie and Nikolaj Coster-Waldau were two of the absolute favorites on-screen and off since their interviews were often akin to a comedy act seeing as how the two of them were constantly feeding off of each other and were having a great time. there might have been a few tense moments here and there but they were diffused quite nicely by one or the other, usually with a big grin on Nik’s face since he appeared to be enjoying needling Gwen now and again. But she gave as good as she got, both as Brienne and herself, and that’s why these interview clips are so much fun since she’s definitely capable of standing up for herself and speaking her mind, which added to the whole process in a very big and impressive way.

Where Brienne was simply tough, blunt, and honor-bound to do as she’d been bid by Renly Baratheon or Catelyn Stark, Jaime was always bound to do as was best for his family, or himself if his family interests weren’t a huge concern at the moment. He made no secret about his disdain for Brienne and the fact that she was a fighter, and even his equal in many ways. Brienne was definitely the odd person out in GoT since she could best quite a few of the men considering that she took on Jaime, the Hound, and was only bested in a sparring match by a trained and deadly Arya Stark, who she underestimated in a big way. It’s fair to say that if the two met in a real fight that Arya might stand her ground quite well, but it does feel that if Brienne was going full out that Arya would find herself needing to fall back on more than her footwork and blade skills. But the dynamic between Jaime and Brienne was such that the two would have no doubt been evenly matched had they met in their prime. As it was when they first drew blades against each other, Jaime was exhausted, unarmored, and had been a prisoner for a while, meaning he likely wasn’t fully rested and wasn’t at the top of his game. Yes, those are all excuses, but they’re all valid too as any swordfighter or even athlete would tell you since those that are poised and ready usually have a slight advantage over those that have been run ragged and aren’t at their best. But a fight between these two in their prime would have been fun to see.

Watching them during their interviews though is hilarious since the back and forth banter that they throw at one another makes it clear that they had a good time in each other’s company and while there might be a bit of annoyance now and then it’s easy to think that they grew used to each other after a while. The story of how they first met was a bit revealing since it made Nik out to be kind of a standoffish individual, but obviously things started looking up from there since after all this time they’re able to have fun with each other in an interview and keep it light before really digging into the comedy that lies between them. Just watching the clip is enough to start rolling since between Gwen’s laugh and Nik’s consistent need to be a smart aleck its nonstop jokes that make it apparent that these two had a lot of fun together on the set and grew to be good friends at one point. There’s no doubt that a lot of the cast grew to be very friendly with each other since the show lasted for several seasons and believe it or not, the author didn’t kill everyone off, though he did end up killing quite a few favorites off since death was kind of the name of the game after a while, but if anyone was surprised the Sean Bean’s character, Ned Stark was killed in the first season then you likely haven’t seen a lot of his movies. There are times during interviews that its kind of obvious that cast members aren’t entirely comfortable with each other, and then there are clips like this that go the complete opposite direction. Personally, I like seeing clips like this since it indicates that it’s not all business on set and that people do actually have fun with what they’re doing.